B 9 Classics in Colour 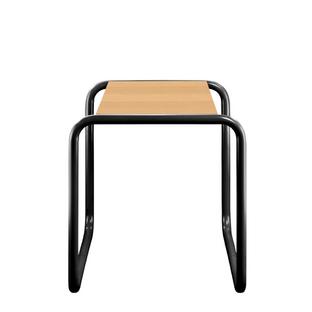 3% advance payment discount*: 599,46 € (Save 18,54 €)
* incl. VAT, incl. shipping (Austria, Belgium, Denmark, France, Germany, Luxembourg, Netherlands)
The famous and popular B 9 nesting tables created by Marcel Breuer during his time at the Bauhaus have received under the label of "Classics in Colour" new tones. In keeping with contemporary furnishing styles Thonet present the classic Breuer table in new lacquered steel tube hues: inspired by the classic Bauhaus colour, and for all the Johannes Itten's colour wheel, the new version attractively and effortlessly connect the past with present. The simple, but effective design receive through the new in colours an elegant figure - be that individually or in combination as a landscape. The meeting of two styles - Thonet bentwood furniture in a modern setting: the Stuttgart Weissenhof Estate Marcel Breuer is one of the main representatives of the Bauhaus school. Thonet furniture is manufactured in Frankenberg in Hessen, Germany. For over 150 years Thonet has been producing furniture classics, and have often written design history.