3% advance payment discount*: 1.212,50 € (Save 37,50 €)
* incl. VAT, incl. shipping (Austria, Belgium, Denmark, France, Germany, Luxembourg, Netherlands)
The Vitra Panton Chair Classic is the result of many experiments undertaken by Verner Panton in the late 1950s together with Vitra in the search for a cantilever chair made entirely of plastic. The chair in gloss lacquered rigid foam stands out with its distinctive curved shape that could only be realized thanks to a revolutionary casting process and which has subsequently been awarded numerous prizes. The Vitra Panton Chair Classic is more than a comfortable seat, but also a unique sculptural design object which adds that special something to any room.

The Panton Chair Classic is constructed from rigid polyurethane foam with a gloss varnish finish, and as such is true to the version originally produced and marketed by Vitra in 1967. The Panton Chair is produced from a modern polypropylene and has a more matt surface. The polypropylene version was authorised by Verner Panton in 1999.

How do I recognise an original Panton Chair?

The signature "Verner Panton" is engraved in the base. With a combination of form and materials that were new in the 1950s and 60s Verner Panton developed his Panton Chair, and thereby wrote a piece of design history. The classic four-legged chair was overhauled and more futuristic, flowing contours introduced. The new found freedom in furniture manufacturing offered by the new materials and processing of the day enabled Verner Panton to develop his design classic. The Panton Chair Classic is the result of numerous experiments and with its all-plastic shell made of high-gloss lacquered rigid foam appears more as a decorative sculpture than a functioning piece of seating. And an object which on account of its newness and free swinging, free flowing form initially proved very difficult to produce serially. In addition to the Panton Chair Classic Vitra also produce the Panton Chair. The interesting fact about the Panton plastic cantilever chair is that it presents itself differently from every angle: very inviting strong and elegant from behind, its clear unique curved shape is only revealed by changing your viewing perspective. Born in 1926 in the Danish community of Gamtofte Verner Panton was encouraged by his parents to study architecture: furniture designer was not initially his dream job. Fascinated from an early age by colours and shapes, he initially attended the Technical College in Odense and later the Royal Academy of Fine Arts Copenhagen, and thus followed a path very similar to that of Arne Jacobsen, in who's studio he spent two years in the early 1950s, a position which means that Panton was also involved in the design of the world-famous Ant chair by Arne Jacobsen. Soon, however, Panton's work developed in completely different directions than those traditionally associated with the so-called Scandinavian style. He opened his own architecture and design studio, where he began the development of his own innovative furniture ideas and in which he turned away from established materials and forms. Verner Panton's undisguised affection for the new plastic material can be found in many of his designs, replacing familiar natural materials such as wood. Due to the new opportunities offered by the material, the shape of his works could not be eccentric enough and with the Panton Chair, he realized the first single cast plastic cantilever chair. His preference for vivid colours and vigorous shapes was also reflected in Verner Panton's work as a textile designer, and a central feature of Panton's work was creating a harmonious interplay of furniture, wall, ceiling and floor designs through a building. From the early 1960s onward Verner Panton worked very closely with the Swiss based manufacturer Vitra, so much so that Basel eventually became his adopted home. Despite the numerous prizes Verner Panton received for his work, demand for his works began to fall away in the 1970s. This was partly due to the oil crisis, with Panton's unconditional focus on plastic leading to increasing criticism. However in the 90s his canon experienced a revival, Panton designed interiors for several furniture stores and worked on numerous trade fairs. "Light and colour", the last exhibition he designed opened two weeks after his death in September 1998. Vitra was founded in the 1930s as a small shop fitting business in Birsfelden, Switzerland and grew over the years into one of the most important furniture manufacturers. In addition to the designs of Charles and Ray Eames Vitra has become famous for its cooperations with contemporary designers such as Antonio Citterio, Erwan Bouroullec or Konstantin Grcic. Also the relationship between Verner Panton and Vitra was very tight. In the 1960s the Swiss manufacturer was the only company willing to produce the prototype of the Panton chair; however, the production proved difficult and only after several years of painstaking experimentation were Vitra finally able in 1968 to produce in series. A piece of design history was written. Today, many of Vitra's classics can be seen on the Vitra Campus: the home to many of the company's manufacturing, administrative and logistics buildings as well as the Vitra Design Museum and the VitraHaus. The name "campus" makes reference to the merging of different artistic styles and architectural styles that come together there. With respect to its manufacture the Panton Chair Classic has a very eventful history. The original idea behind a legless chair saw the designer Verner Panton first create a design made of moulded plywood, but then emergence of new synthetic materials inspired him to rethink. No longer bound by traditional material such as wood, Panton was of course no longer bound by traditional ideas of shaping. The search for an S-shaped chair fascinated Verner Panton and he began to experiment with plastic. The decisive element was the foot section which had to be crafted without a fixed base plate yet so formed that it still lent support to the chair - by good fortune the solution also turned out to be one that also offered comfortable legroom. The first prototype was presented by Panton at the Mobilia club in Denmark, but his hopes of finding a suitable producer for his plastic cantilever chair were quickly disappointed. Only at the beginning of the 60s did he find with the Swiss manufacturer Vitra the right partner. However, before the Panton Chair could go into series production required a few years of further experimentation. In 1968 the first chairs in their currently known figure were realeased. The complicated process of manufacturing from rigid foam was aided in the late 90s by new, sophisticated injection moulding techniques which allow the Panton Chair to retain its characteristic, one-piece form, but in reinforced polypropylene rather than hard foam. Today, both versions are produced by Vitra, in addition to the Panton Junior kids version of the enduring design classic. The 1950s and 60s were Verner Panton's most productive and successful. Due to scarce natural resources on account of the only recently ended Second World War the new miracle material plastic was very much in demand and sought after. Relatively cheap in production and offering easy colouring possibilities, the fact that this light material could be formed as required made it a popular choice for mass market products. And Verner Panton was attracted by the possibilities of the new fashion plastic material to the full. Immediately after completing his studies at the Royal Art Academy Copenhagen Verner Panton worked in Arne Jacobsen's studio and although Jacobsen's influences, as with those of Poul Henningsen, are at first glance not easily discernible, both shared and inspired his ambition for the development of technological innovations, which went beyond the mere functionality of products. While Arne Jacobsen was famous for its organic shapes and materials, Panton was later a key figure in the history of Pop Art, which was mainly characterized by strong, striking colours and synthetic materials - but also employs organic form languages, as the Panton Chairs beautifully demonstrate. More about 'Panton Chair' in our blog 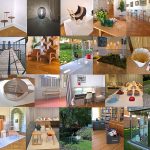 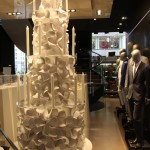 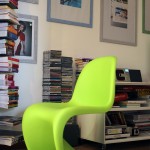 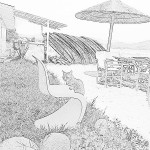 ...At the Leipzig Buchmesse we were given a privalleged preview of a forthcoming travelogue written by one of Verner Panton's younger chairs In "Jordan isn't just a tabloid creation" Verner, Panton Chair junior describes the adventures he experienced on a road trip undertaken with a group of strangers from Stuttgart to the Jordanian capital Amman... And although still very much a project in development, the first cosplay Panton Chair characters could already be seen within Leipzig Messe... 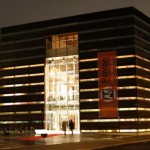 Parkhaus Berlin Seat Pad for Panton Chair
from 41,00 €
in stock