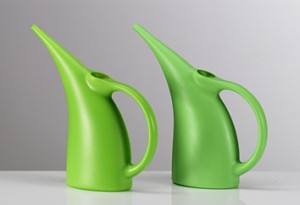 During the 2009 consumer goods trade fair Ambiente in Frankfurt the 33rd “Plagiarius” Awards were presented. Organized by the society “Aktion Plagiarius” the award is a negative prize for to those producers and retailers who trade in copies and imitations of designer products and specialist machinery. A gnome with a golden nose – the award symbolizes the exorbitant profits made by the counterfeiters and trade mark pirates at the expense of the rights owners. With the action the organizers intention is to raise awareness of the value of branded products and the effort and costs that go into developing new products, as well as of the negative effects of illegal copies. Not just the designer furniture market and its customers suffer from the trade in copies and imitations; in many cases the production process and practices used are questionable and occasionally illegal. It goes without say that there is no quality control of the final product.

A special commendation was given to the Chinese producer Senaka Ltd, for distribution of the imitation watering can “Elise” from the company Koziol. The dealer, however, removed all remaining products from the market ahead of the ceremony and named the supplier. Further prize winners can be seen here.

When ordering from smow you are, naturally, guaranteed that you will receive a high value, quality checked originals