Established in 2010 by the architects Pascale Wakim and Nicolas Bellavance-Lecompte, Beirut based Carwan Gallery is and was the first contemporary design galley in the Middle East. After neigh-on three years as a Pop-Up Gallery, at the end of June Pascale and Nicolas will formally open their first permanent space in Beirut.

Which sounds like confirmation that all is going well.

We first came across Carwan Gallery in Milan at MiArt 2013, and were greatly taken with not only the objects presented but also the fresh, unassuming and uncomplicated way the works and the various traditions behind the works were presented. Or put another way, there was no pretension on show.

At Design Miami Basel 2013 Carwan Gallery were presenting the specially commissioned Landscape Series of vases and tables by Paris based architect and designer India Mahdavi.

Which all in all seemed like excellent reasons to learn a little more, and so at Design Basel we met up with Nicolas Bellavance-Lecompte to talk about Carwan Gallery, design in the Middle East, but began with the glaringly obvious question, why Beirut?

Nicolas Bellavance-Lecompte: When I first visited Beirut I was very impressed by the cosmopolitan nature of the city, its style and I saw the energy and enthusiasm that was being put into interiors of, for example, restaurants and clubs but also private spaces and it occurred to me it might be an interesting location to open a design gallery for the whole region.

(smow)blog: And for those, like us, who don’t know, how is the design scene in Beirut? Can one speak of a design scene?

Nicolas Bellavance-Lecompte: I think the city has an enormous design culture. Beirut is a relatively small city, when considered in comparison with, for example Istanbul or Cairo; however, the design community is relatively large. And be it in terms of numbers of designers or the quality of the work and research being undertaken, I would say Beirut is the design capital of the Middle East.

(smow)blog: Should or must the objects from and for your gallery have a connection to the region? Or is that not so important…..

Nicolas Bellavance-Lecompte: We have a direction, a line in the gallery that is we try to commission works that can made in the Middle East. We have wonderful craftsmen in the region with unique, locals techniques and approaches and there is a tremendous richness in the Middle East that has not been explored much in terms of contemporary design. And I think it is always possible to find new ways to interpret these traditional crafts to make them vivid and contemporary. It’s also a way to preserve them, otherwise they risk being lost.

Nicolas Bellavance-Lecompte: What is interesting is that until last year we had mainly western based designers in our exhibitions presenting works that were, lets say, reinterpretations of Middle Eastern crafts, and that collection was very well received in the middle east. Since this year we’ve had more of a focus on Middle Eastern designers, something that has really found a lot of resonance in Europe and the USA and so our market is shifting slightly. Which was a surprise, but something that is very positive.

(smow)blog: If we’re correctly informed most of the designers you work with are architects, is that deliberate?

Nicolas Bellavance-Lecompte: That most of the people we work with are architects is probably related to Pascale and my backgrounds, but also because we like the approach of architects to both design and also to the execution of a project. We do also work with some pure product designers such as Khalid Shafar; however, because there is no real industrial production in the Middle East it is currently very hard to be a pure product designer in the Middle East.

(smow)blog: To end, turning to the new collection on show here, briefly what is the background to the Landscape Series?

Nicolas Bellavance-Lecompte: We’ve been working with India Mahdavi on the project for over a year now, and the collection is centred around an exploration of landscapes in the context of Iznik Foundation tiles. The Iznik Foundation produce ceramics according to 16th century Ottoman traditions, which means the individual tiles are 85% quartz which is why they are so white, so bright and give off so much luminescence. And what India has produced is a synthesis of ideas of landscape drawing largely on her experiences from and in different cultures and the various countries in which she has lived.

(smow)blog: This synthesis of ideas is represented by a series of tables and vases. In how far were such objects part of the original brief….?

Nicolas Bellavance-Lecompte: Together with India we had several discussions about, for example, how we should structure the collection, the typology of the objects and at the end of this process came the idea that vases and tables would be interesting objects for such a collection, also because they are objects that could be used indoors and outdoors which we found an interesting idea, this play between interior and exterior landscapes.

(smow)blog: You mentioned the luminescence, the other, related, factor is of course the colours….

Nicolas Bellavance-Lecompte: …. indeed, and curating this intense vibration between the colours, as India herself describes it, this play on colour and identity is a central aspect of the collection. The vases, for example come in six different shapes, either with pure gold interiors or in dense, vivid monochrome versions, and all can be interlinked to form the required composition. And the interplay between the form, material, the depth of the material’s refraction and the colours creates an effect, a pattern, that stimulates the imagination. 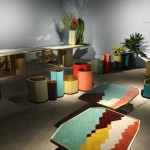 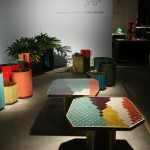 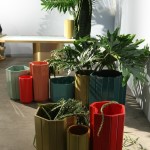 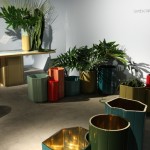 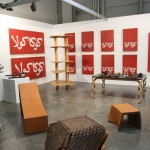 For all who missed it in April: Carwan Gallery at MiArt Milan 2013