On the evening of Tuesday June 3rd the winners of the 2014 Designpreis Halle were announced at a ceremony in the town’s historic Stadtbad public bath.

Premièred in 2007 the Designpreis Halle is an international tri-annual design competition which in every edition asks designers to submit entries related to a particular theme.

A subject that in the juries opinion was best handled by Cologne based communication designer Emanuel Steffens and his project “Trinken statt tragen” – Drinking not carrying;  a project in which Emanuel transforms tap water into a brand through a collection of “locally branded” glasses and thus hopes to encourage more of us to drink tap rather than bottled water.  And so, for example, the good folk of Hamburg are invited to drink “Rohrperle”, in Munich “Leitinger” is offered while in the former-DDR “Heimquell” is the favoured future brand. You probably have to have a fairly advanced knowledge of German culture and language to fully understand the subtlety of the names. But believe us they work very well indeed. Or in the words of Jury member Professor Volker Albus, “the project works because the designer doesn’t just perfectly combine the individual elements, but with the choice of typeface, the form of the glass and in particular through the use of vernacular jargon he captures the popular perception of the “product” water.”

One of the good things about the Designpreis Halle is that in contrast to most design competitions the winners aren’t asked to pay the organisers “licensing  fees” as the reward for their success, but actually receive prize money. And so in addition to the pride at winning Emanuel Steffens can take pleasure in the € 4000 first prize.

Second place was shared by two designers; Estel Alcaraz Sancerni from Barcelona for the foldable wellington boot family “Sardines” and Jaffa based Shira Keret for her “Monolith” collection of carrara marble objects inspired by the natural process of water erosion.

In addition to the winners the international jury also awarded “Special Recognition” awards to Charlotte Degry and Camille Mabboux from Troyes for the project “Still Life”, Hamburg based Esther Stühmer for the rain coat “Wassermarsch”, Mathilde Gullaud from Paris for the concrete paving stone “Louis” – an object which develops a surface pattern through contact with water, for all rain – and Lisa Merck from Münster for “Verstecktes Wasser aufgedeckt” – “illuminating concealed water” – a concept which involves placing labels on packaged food detailing the amount of water used in their production and so enabling consumers to make more informed decisions. A project that juror Nils Holger Moormann describes as “charming as it is effective”, and which he says he can well envisage being used in context of a guerilla action. Just in case you happen to be in a supermarket in Aschau im Chiemgau and find a load of stickers on packaged goods pertaining to the concealed water content of the products.

Until June 22nd all 19 winning and nominated projects, including the excellent and sadly over-looked Plat’eau by Lisa Keller and Mark Braun’s Fortune water carafe collection, can be viewed, studied and enjoyed in an exhibition in the Stadtbad Halle.

As indeed can the Stadtbad Halle.

Full details can be found at www.designpreis-halle.de 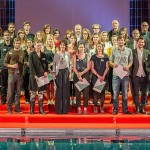 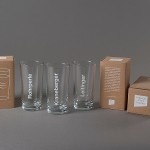 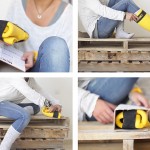 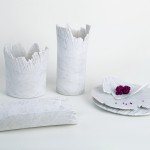 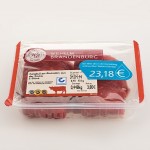