The exhibition F.G. Hoffmann – Court Carpenter and Entrepreneur at the Grassi Museum for Applied Arts Leipzig aims to rectify that. 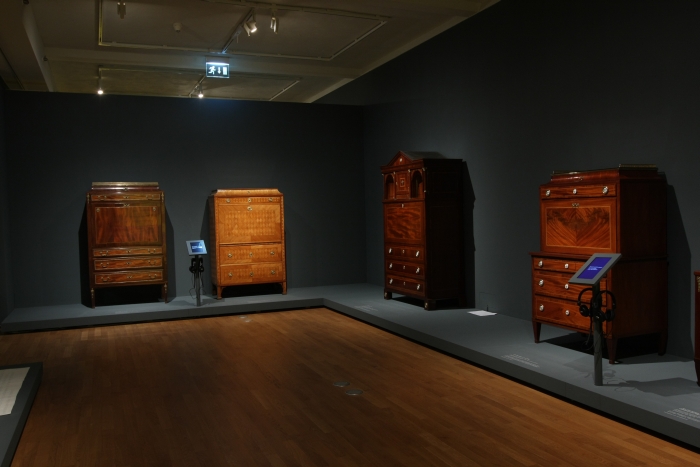 Born in 1741 on the estate of Puschwitz Manor, Sachsen, Friedrich Gottlob Hoffmann began his carpentry apprenticeship in the village of Belgern before in 1758 the Seven Years’ War and the consequences thereof forced him to move to Leipzig where, following the completion of his apprenticeship, Friedrich Gottlob Hoffmann opened his own workshop in 1770. Meagre initial success improved when he teamed up with the Leipzig art dealer Carl Christian Heinrich Rost. From his shop in the town’s Auerbach Hof Rost sold ceramics, graphics, statues and furniture to the upper echelons of society in Leipzig, Sachsen and beyond. In 1783 F.G. Hoffmann received his first commission for furniture from Carl Christian Heinrich Rost and Hoffmann’s furniture very quickly became the mainstay of Rost’s furniture portfolio – and the income from Rost’s commissions a mainstay of Hoffmann’s business.

In 1788 Friedrich Gottlob Hoffmann received a loan of 1000 Talers from the ruling Sachsen Court to enable him to further expand his already expanding business and at the Leipzig Easter Fair of 1789 launched his first sales catalogue.

One of the very first furniture sales catalogue ever published.

Although catalogues showing examples of the sort of objects a carpenter could provide were known in France and England at that time, Friedrich Gottlob Hoffmann was one the first to produce a catalogue showing objects that were actually physically available for purchase. He was certainly the first to offer such a sales catalogue in Germany.

Bound in leather with gold embossing the catalogue presented a “basic” version of the furniture being offered; the customer selecting, for example, the wood or the preferred material for any handles or knobs. A process which was conducted by post. A relatively slow process, especially when one considers that Hoffmann’s customers were to be found throughout Europe, but one which to judge by the success of the business, the customers readily and happily accepted.

Once the details as to materials and price had been agreed the piece was delivered. Objects which were in stock would be dispatched once all formalities had been completed. Those which were not in stock would be made and dispatched within three to six months. Delivery was by horse and carriage – and as one expects from the delivery of such large, valuable objects, to an agreed time and date. The customer being kept informed as to the piece’s movements throughout the delivery process.

We didn’t ask, but we’re assuming there was no 28 day return policy.

The success of Hoffmann’s venture resulted in the publication of a second catalogue in 1795; and also brought Hoffmann into regular conflict with the other master carpenters in Sachsen, not least because of the number of journeyman carpenters he employed: in 1797, for example, Hoffmann employed a staff of 42 carpenters. The average of the period was 5. As such Friedrich Gottlob Hoffmann can be considered as one of the first commercial furniture manufacturers, rather than a carpenter who made furniture.

Friedrich Gottlob Hoffmann died on January 24th 1806 in Leipzig, and although his widow Maria Dorothea continued the business until her death in 1813, the trail then goes cold. And so one of the most successful and innovative neoclassic furniture enterprises vanishes.

And would have remained so had it not been for a decade’s worth of research by furniture restorer Peter Atzig and antique dealer Michael Sulzbacher, research which, supported by the Grassi Museum for Applied Arts, has resulted in the exhibition Exclusive Carpentry Works From Leipzig: F.G. Hoffmann – Court Carpenter and Entrepreneur. 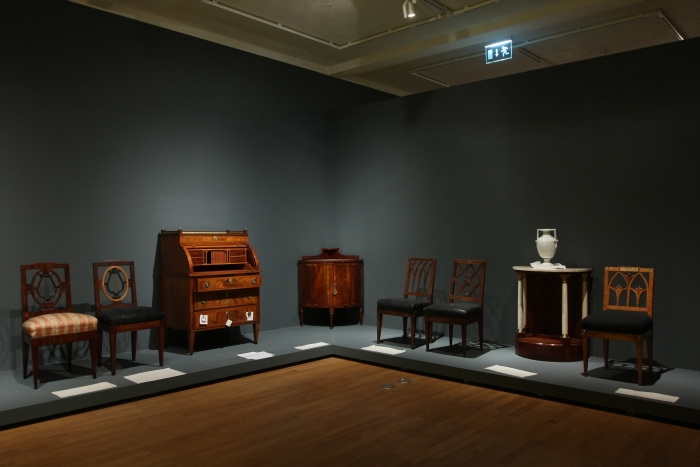 Presenting some 80 objects including, for example, tables, chairs, cupboards and desks, F.G. Hoffmann – Court Carpenter and Entrepreneur not only very neatly demonstrates the variety of furniture genres offered in Hoffmann’s catalogues and as such the tastes of the age, but also helps explain how Hoffmann used his carpentry understanding and expertise to design his furniture so as to, more or less, enable serial production. The furniture was all made by hand, but in a largely industrial context and as such required construction systems and processes which eased the production.

Adding to the charm of both the objects and the Hoffmann story is the fact that many of the pieces Hoffmann created were multi-functional pieces; a superficially very simple object often hiding a multifarious, and technically very advanced, piece of design. In addition to secretaries and desks with hidden drawers and concealed cupboards, Hoffmann’s portfolio included, for example, various toilette tables where an otherwise unassuming sideboard could be “opened up” to reveal wash basins, mirrors, storage space and even bidets.

That no museum, and far less no private owner, wants x-thousand ill-qualified and ill-washed hands fiddling with their Hoffmann’s, the Grassi Museum exhibition makes excellent, judicious, use of videos which explain the hidden functions and so the essential soul of the pieces. A curatorial decision which is not only a nice extension of the presentation but also a nice demonstration of the limitations of the printed catalogue and the value of combining a printed catalogue with a more interactive option. Such as a website. 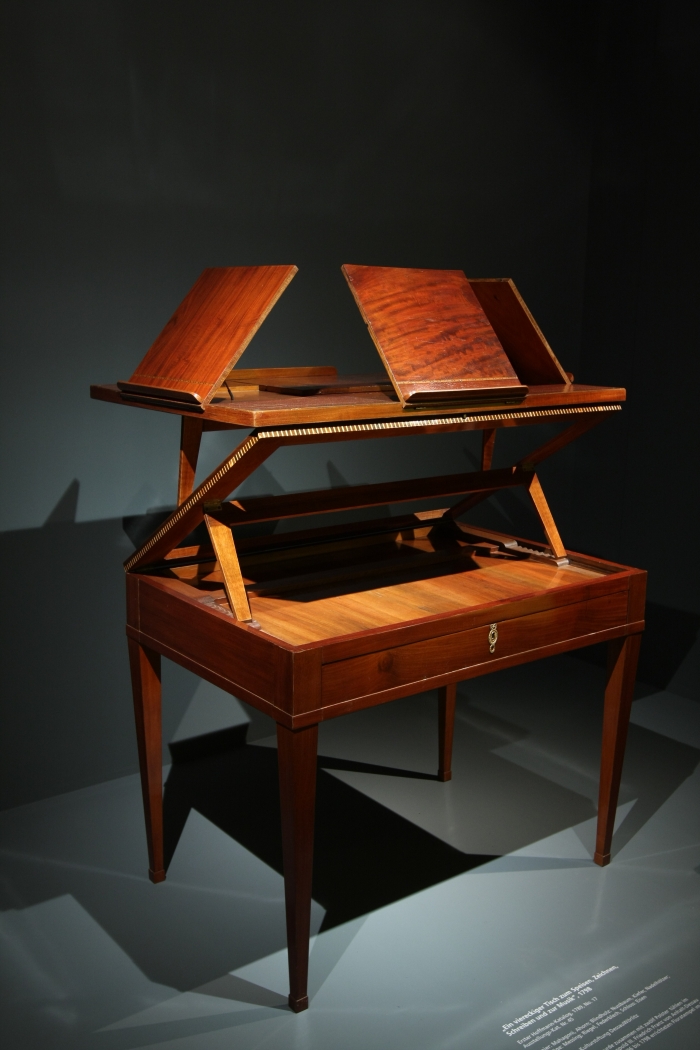 A table for "eating, drawing, writing or playing music". That is what we call a multi-purpose table. (F. G. Hoffmann 1798)

Despite the fact that his company, name and furniture have all but vanished, Friedrich Gottlob Hoffmann’s influence remains, for all through the concept of the sales catalogue – in generations to come the furniture catalogue would help company’s such as Thonet or Horgenglarus achieve their global fame, while during the years of empire the furniture catalogue remained the link to home. These days the internet may have largely replaced the printed catalogue, but has yet to kill it off completely. And probably never will.

And while things may have gotten a little quicker, the basic process for ordering furniture from afar remains today pretty much as developed and propagated by Friedrich Gottlob Hoffmann. A fact which stands as testament to his foresight and business acumen.

In fact just about the only thing Friedrich Gottlob Hoffmann didn’t have was a blog through which he could keep those interested in his furniture up to date with current develops in the industry.

And of course provide recommendations for exhibitions one should take the time to visit. 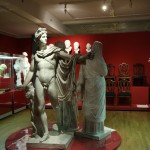 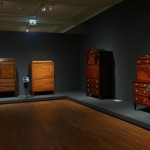 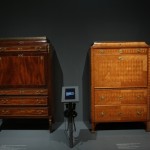 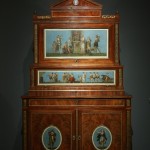 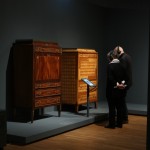 Videos help explain the, often hidden, functionality of the pieces. 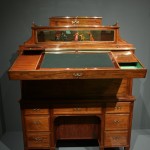 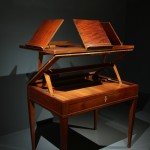 A table for "eating, drawing, writing or playing music". That is what we call a multi-purpose table. (F. G. Hoffmann 1798) 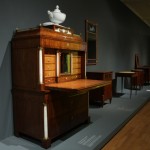 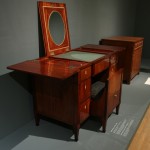 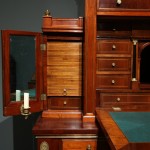 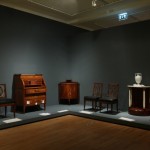 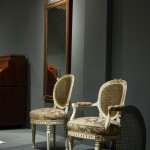