Until February 22nd the Berlin Gallery Haus am Waldsee is presenting the exhibition “Architectural Utopia Reloaded”, a retrospective dedicated to the experimental architecture collective Haus-Rucker-Co. 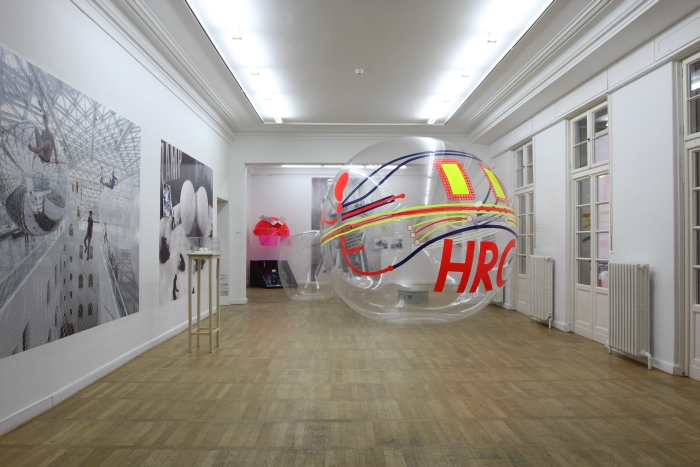 Established in Vienna in 1967 by the architects Laurids Ortner and Günter Zamp Kelp together with the artist Klaus Pinter, Haus-Rucker-Co principally concerned themselves with the creation of a new understanding of architecture fit for the coming centuries and about making us aware of the rapidly changing nature of the world around us and the responsibilities contained therein. Aims they largely pursued through artistic installations and architectural interventions – always working in the public sphere, because that was where change had to occur.

After creating an initial stir in Vienna with projects such as their Electric Skin transparent plastic clothes collection, the Roomscraper lamp or the 1967 parasitic architectural intervention “Balloon for 2”, the trio moved to Düsseldorf in 1969, principally on account of the preparations required for an exhibition of their work in Galerie Zwirner Cologne. In 1971 the trio became a quartet through the addition of Manfred Ortner and the following year Haus-Rucker-Co fissioned into two independently operating studios: Haus-Rucker-Co in Düsseldorf and Haus-Rucker-Inc in New York. In 1977 Haus-Rucker-Inc was dissolved, Haus-Rucker-Co followed, formally, in 1992, although in effect it had been inactive since the mid 1980s.

Presenting sketches, photographs, models, films and inflatable objects – both as reproductions and originals – Architectural Utopia Reloaded explores the philosophy, influence and importance of Haus-Rucker-Co though works created between 1967 and 1977, and focussing on three central areas of the Haus-Rucker-Co canon: the so-called “mind-expanding” program, pneumatic architecture and temporary urban architecture.

In addition to works by Haus-Rucker-Co, and in a move pleasingly reminiscent to the exhibition concept employed at Marta Herford for Der entfesselte Blick – Die Brüder Rasch und ihre Impulse für die moderne Architektur, Architectural Utopia Reloaded also includes works by contemporary artists working in similar fields and which reflect and reference the influence of Haus-Rucker-Co. Berlin based Argentinian artist Tomás Saraceno is represented by his In Orbit project from 2012, Turkish-Cypriot artist and designer Hussein Chalayan through his pleasingly hypnotic 2003 short film Place to Passage while Küchenmonument from and by Berlin’s own raumlabor is present both in photographs and also as a location for selected events in the exhibition’s accompanying fringe programme.

In Orbit by Tomás Saraceno and Giant Billiard by Haus-Rucker-Co, as seen at Haus-Rucker-Co - Architectural Utopia Reloaded, Haus am Waldsee, Berlin

A very accessible and nicely conceived exhibition Architectural Utopia Reloaded provides a very succinct overview of and introduction to not only the work of Haus-Rucker-Co but also the general mood of the time; that sense of pride in the freedom made possible by contemporary technological advances combined with a slight paranoia that things could still go very, very wrong. And of course that in a matter of months we’d have moon colonies and diplomatic relationships with neighbouring galaxies. What it also does very well is avoid the temptation to claim that Haus-Rucker-Co were central to the development of the sort of futuristic urban utopian architecture that so defines the period; the exhibition is no vainglorious hagiography of the collective rather simply shows what Haus-Rucker-Co did, how they did it and why.

What Architectural Utopia Reloaded doesn’t do, largely because it can’t and so doesn’t aim to, is explain why many of the ideas developed and explored by Haus-Rucker-Co remain today as largely experimental, marginal, themes in architecture and design.

And lest we forget, Haus-Rucker-Co weren’t the only collective in the late 60s and early 1970s exploring questions of how future society would, could, should look and how the future urban space should respond to the coming changes. They weren’t even the only collective in Vienna, a city they had to share with the protagonists behind coop Himmelblau. In addition influential collectives such as, for example, Archigram in London, Archizoom in Florence or San Francisco’s Ant Farm were exploring similar themes, as were individuals including, perhaps most famously, Richard Buckminster Fuller, Frei Otto or Heinz and Bodo Rasch. While in 1966 Andy Warhol presented his Silver Clouds installation, a work which involved inflatable metallic clouds floating through the Leo Castelli Gallery in Manhattan, and which demonstrates that it wasn’t just architects who were exploring such concepts.

And so given the number of practitioners, the culture relevance of the ideas and the status of those doing the research, why don’t we all have, for example, inflatable bubbles into which we slip when the noise at home or in the office gets too much?

Viewing Architectural Utopia Reloaded we found it hard not to find ourselves drifting back to Heinz Rasch and Axel Bruchhäuser’s theory as to why the cantilever chair designs of Heinz and Bodo Rasch have never attracted a wider public, namely that “on account of the geometric divisibility of a standard room only cubic chairs such as those from Mart Stam could establish themselves; because they repeat this cubic form. That is chairs with quiescent vertical and horizontal lines have a chance whereas those which contradict this spatial harmony do not.”

Similarly, whereas groups like Haus-Rucker-Co started discussions about concepts such as rooms in rooms and temporary internal structures, when architects finally got round to realising such on a commercial, serial scale, it was in the neat, quadratic form of the office cubicle. A solution almost primordial in its predictability.

Today there are commercially available inflatable products for creating temporary interior architecture, most notably perhaps Cloud by Monica Förster for Stockholm based furniture manufacturer Offecct. But let’s not fool ourselves that a product such as Cloud is the highest selling item in the Offecct portfolio. It will sell. But guaranteed nowhere near as regularly as it should.

We suspect one reason is that such objects radically alter the interior space, destroy the harmony and create forms outwith our normal registers and to which we culturally cannot relate.

Similarly every so often media attention is given to a project where someone, invariably a student, attaches a temporary structure to the side of a house for use as an extra room. Haus-Rucker-Co did that in 1967. And it’s still not accepted. But what is so wrong with temporary spaces?

As we noted in our post on the recent presentation of Küchenmonument by raumlabor at the Berlinische Galerie “Much like cars, power drills or suits, the majority of event spaces are only needed on an ad-hoc, occasional basis. Yet are permanently there. Taking up space rather than providing it.”

And the same logic can be applied to domestic architecture. We don’t need bigger houses, we need the ability to create more, temporary, space when it is, temporarily, needed. Why not employ inflatable or otherwise pop-up-able add-ons?

Beyond of course the fact that such a structure contradicts the accepted understanding of what a house looks like, fails to comply with geometrical convention. Convention lets us add a permanent extension through the roof, but not inflate a balloon out the bedroom window for 24 hours. 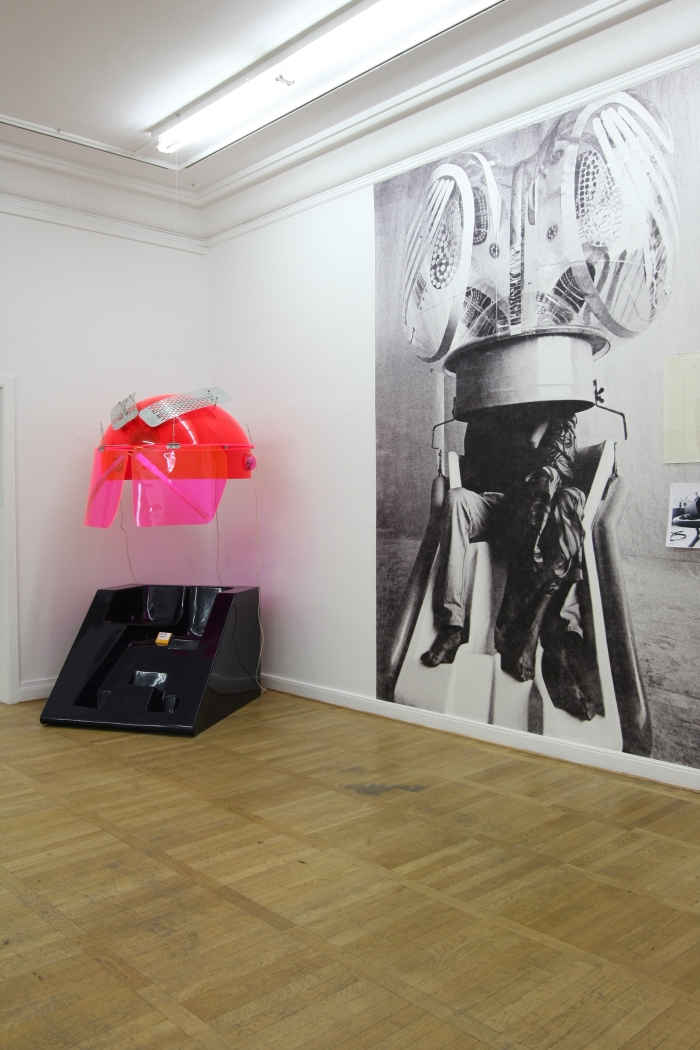 Haus-Rucker-Co of course weren’t just about experimental, inflatable architecture they also looked at ways of manipulating the environment around us, developing new ways for us to perceive, understand and so relate to our environment. And when on looks at the various Mind Expander projects Haus-Rucker-Co developed in the late 1960s, it’s hard not to think about the speed with which we are moving towards a widespread use of augmented technology headsets.

Or with their 1971 project Cover which involved building an air supported dome over and around Mies van der Rohe’ Lange House in Krefeld, Haus-Rucker-Co tackled the subject of how best to protect ourselves against the ever increasing threat of air pollution. Similar of course in many ways to the glass dome the US government placed over Springfield in the 2007 film The Simpsons Movie; not least because it isn’t a solution but much more highlights the problem and so challenges us all to work towards a more agreeable, responsible, future.

And similarly while the rooftop gardens and biotopes created in New York in context of the collective’s Rooftop Oasis projects of the early 1970s were in their day revolutionary; such now form a standard consideration in most all new architectural developments.

And so maybe the real answer as to why we don’t all have inflatable bubbles tucked away in a cupboard is simply because we’re not that far yet. We’re on our way. But have still to arrive.

Anyone looking for an informative, entertaining and thought provoking short cut is advised to visit Haus am Waldsee.

Full details, including information on the accompanying fringe programme can be found at www.hausamwaldsee.de 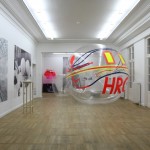 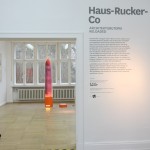 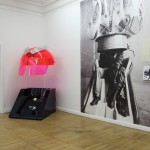 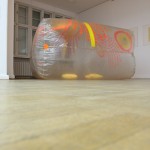 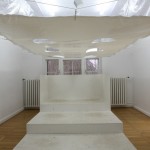 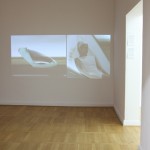 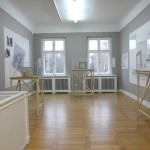 In Orbit by Tomás Saraceno and Giant Billiard by Haus-Rucker-Co, as seen at Haus-Rucker-Co – Architectural Utopia Reloaded, Haus am Waldsee, Berlin 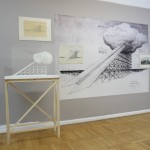