“I intend to run the institution such that in terms of craftsmanship the best possible is achieved, and to foster it so that from an artistic perspective it meets all the requirements of modern conceptions of art”1, so wrote the architect Paul Thiersch in his 1914 application for the vacant post of Director of the Handwerkerschule in Halle, Germany.

An argument which clearly found favour with the Hallesche selection panel, for on July 1st 1915 Paul Thiersch was selected ahead of the 74 other applicants2 and pronounced the school’s new Director, an appointment which began the process that ultimately led to the current Burg Giebichenstein Kunsthochschule Halle.

Born in Munich in 1879 into an established family of architects and classicists, Paul Thiersch studied architecture at the Technische Hochschule in Munich and worked for the city’s building office before in 1906 he moved first to Düsseldorf to take up a position with Peter Behrens and subsequently in 1907 to Berlin to assume the role of office manager with Bruno Paul, a post he held for two years before leaving to work as a freelance architect in Berlin.

In 1913 the serving Director of the Handwerkerschule Halle, Herr Brumme, died, and the authorities in the city decided that the new Director should be charged with not only leading the school, but leading the school into the future.
By all accounts the state of technical and craft education in the German Empire at the beginning of the 20th century was, quite frankly, awful: not just in terms of content but also organisation, direction and professionalism. With industrialisation changing the nature of production the majority of German students weren’t being taught the necessary skills to allow German industry to master the new era, a situation which arguably helped establish the term “Made in Germany” as the byword for poor quality it was at the time. And thus although butchers and bakers were still very much required, the real need was candlestick-makers, and for all those candlestick-makers who could design candlesticks suitable for industrial production.

According to Katja Schneider, Halle’s Mayor, Robert Rive, was keen on offering the post the Henry van der Velde3, however his return to Belgium scuppered that plan and so the position was advertised. According to Schneider a major influence on the decision to appoint Paul Thiersch was the lobbying of the local architect Gustav Wolff4, a man responsible for many important projects in the city at that time and an important figure in the local arts and crafts community. Other sources refer more generally to the influence of Peter Behrens and Bruno Paul on the decision, or at least to the decision being influenced by Thiersch’s associations with Behrens and Paul.

Regardless of why the decision fell in Thiersch’s favour, once ensconced Paul Thiersch immediately set out his promised reforms and as early as August 1915 presented his plans, including dividing the school into four departments: applied arts, handicraft, architecture and mechanical engineering5. Important in this context is that whereas the other three departments were simply a new organisation of existing departments the applied arts department was new and in addition to teaching students was devised to allow students to receive practical training in the daily reality of the new industries they were planning to enter, and thus connect teaching with work, something, which, as Thiersch noted in his original application, all new arts and crafts schools practised to great effect. In addition Thiersch introduced specialist classes run in combination with practical workshops, thus the school soon had an interior design and architecture class with a carpentry workshop, a textile class with weaving workshop and a graphics class with workshops for bookbinding and printing, thus further reinforcing the connection between art and trade.

Consequently, although the Halle school was by no means unique in the nature of its educational programme, it did now have a contemporary structure and a future focussed emphasis which would allow it to become a leading educational institute and an important component in the improvements and advances in both German manufacturing technology and the arts.

Then, and not for the last time, war intervened, and although Thiersch’s work continued and his reforms moved forward, it wasn’t until the 1920s that they began to bear fruit, for all through the school’s move to the historic Burg Giebichenstein castle, “high” above the River Saale*; a move which gave the students more space and new freedom, and the school a new identity, and ultimately a new name.

Throughout the 1920s and 30s, the “Burg” built on its reputation and no important fair or exhibition was complete without Burg Giebichenstein, including a representation in context of the 1927 Weissenhofsiedlung exhibition in Stuttgart, a rare honour for a non-Bauhaus, non-Baden-Württemberg institution. In addition the 1920s and 30s saw works by students and staff from Burg Giebichenstein regularly presented in museum exhibitions and Hallesche works entered ever more permanent collections.

Following Bauhaus’ move from Weimar to Dessau in 1926 and the associated loss of the ceramic workshop and changes in the teaching programme, numerous Bauhäusler switched to Halle, most notably the sculptor Gerhard Marcks who initially served as head of the sculpture class in Halle before in 1928 he replaced Paul Thiersch as Director of Burg Giebichenstein.

One era was at an end, but another stood before. 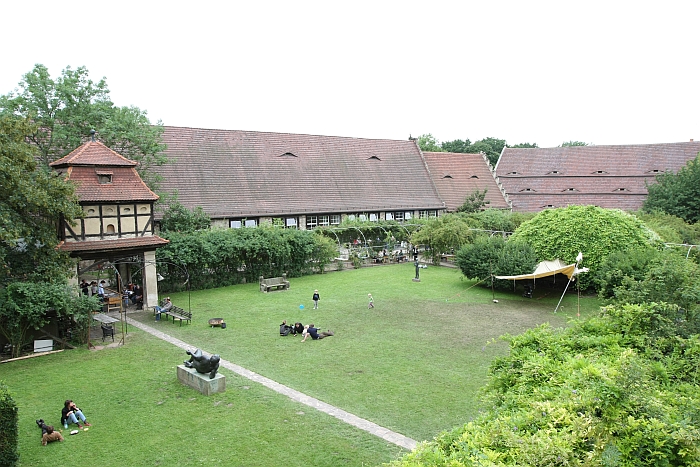 The NSDAP’s seizure of power was famoulsy accompanied by attacks on artistic freedom, strict doctrines on artistic forms, and controls on the idealogical content of teaching, consequences which meant that following an ordinance from June 2nd 1933 the handicraft and art sections at Burg Giebichenstein were separated6, a move which destroyed the principle on which Paul Thiersch had built the school, while the Nazis restrictions on “non-Germans” led to the institution losing many of its most important staff members including, amongst others, Erich Dieckmann, Marguerite Friedlaender-Wildenhain, Erwin Hahs, Benita Koch-Otte and Gerhard Marks. Thus in the course of 1933 Burg Giebichenstein, effectively, ceased to be.

Throughout the years of Nazi dictatorship and war the school’s activities were largely curtailed and the school was run as a normal handicraft school, or at least according to the Nazis understanding of such.

And then came the DDR, and the replacement one totalitarian regieme with another.

The years immediately following the war were marked by a slow rebuilding and reorganisation, a process complicated by the problems and uncertainties of the so-called Formalism Debate in the early 1950s, before in 1958 the Hochschule für industrielle Formgestaltung Halle Burg Giebichenstein was established under the leadership of the graphic designer, and Bauhäusler, Walter Funkat. Very much an institution of its age the DDR Burg was geared and focussed towards supporting the industrial demands of the East German government, or as a 1968 in-house publication notes, “social responsibility demands that our university raises and educates a new type of socialist form-giver who is able and willing to use their comprehensive knowledge and skills in their profession for the advancement of socialism”7

Despite such highfalutin socialist nonsense and the bureaucrats who propagated and encouraged it, between 1958 and 1989 Burg Giebichenstein managed to produce some genuinely excellent students and works, a fact largely due to the high-quality of the teaching staff employed, including, amongst many, Erwin Andrä, Rudolf Horn, Ilse Decho or Lothar Zitzmann; and in many ways it is as a consequence of the conscientious work undertaken as the Hochschule für industrielle Formgestaltung that post-unification the Burg Giebichenstein Kunsthochschule Halle was initially able to survive as a functioning educational institute and subsequently establish its current international reputation and for all its position as one of the leading design and applied arts schools in Germany.

And so while the appointment of Paul Thiersch as Director is and was just one moment in the story of the development of Burg Giebichenstein Kunsthochschule Halle, we feel justified in marking July 1st 1915 with a resounding, Happy Birthday Burg Giebichenstein!

And here’s hoping the next 100 years are a little less turbulent! 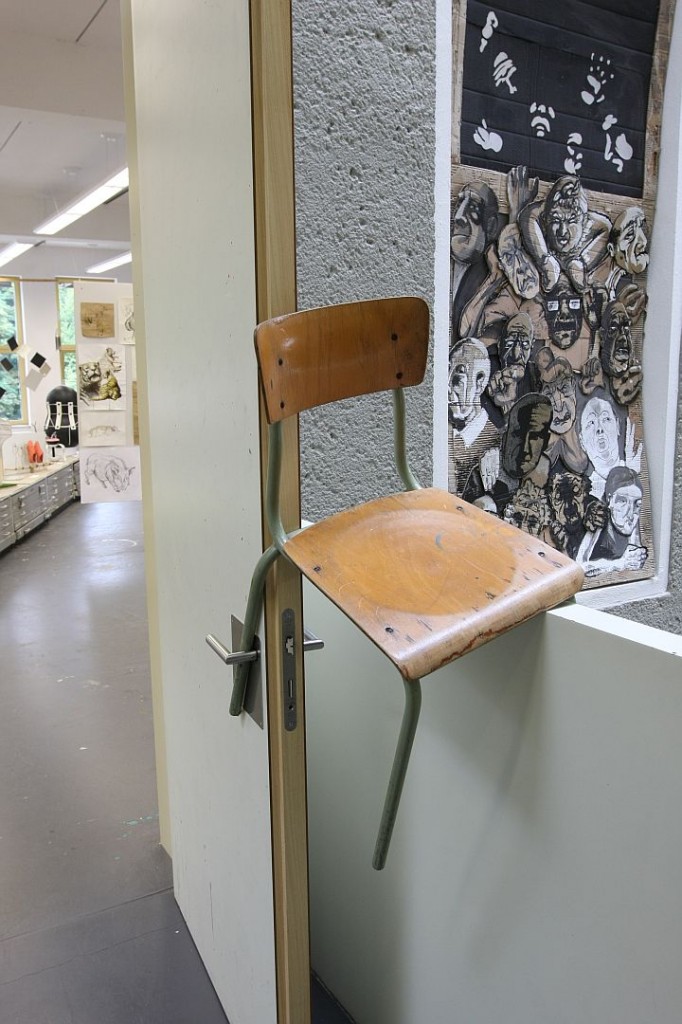 We’re not sure if Paul Thiersch would approve. But we do. Design as a way of thinking perfectly demonstrated at Burg Giebichenstein Halle, 2011