Although older than Bauhaus Burg Giebichenstein Kunsthochschule Halle has arguably never achieved the same popular acclaim as its fêted near neighbour.

Is however still in existence, and thus need not live on its laurels, but rather can continually develop its legacy through the efforts and ideas of its staff and students.

The 2017 annual summer exhibition provided insights into the contribution made, and being made, by the current crop…….. 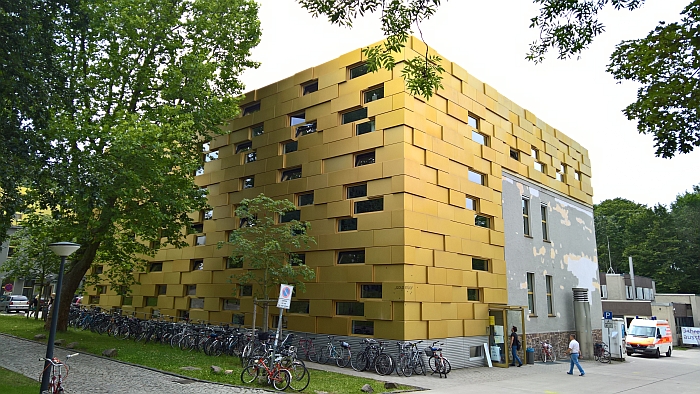 Although it can formally trace its history back to the second half of the 19th century, the story of Burg Giebichenstein Kunsthochschule Halle really begins in 1915 when the architect Paul Thiersch was appointed Director of Halle’s then Handwerkerschule, and began a process of transforming the institution into one which combined arts and crafts for the benefit of both industry and consumers. The basis for this transformation was the workshops where art and craft became applied art and applied craft, and the workshops remain the basis of the education at Burg Giebichenstein.

Whereas Bauhaus closed as a result of pressure from the Nazi NSDAP, a fate which arguably spawned the legend, Burg Giebichenstein merely saw an enforced separation of art from craft, and thus the basis of Thiersch’s concept. Post-war art and craft were once again reunited, Burg Giebichenstein however found itself under the control of another dictatorship, albeit one which allowed it a little more creative freedom, or at least did after it had moved on from the so-called Formalism Debate of the early 1950s, and the institution moved on to became one of the most important centres for industrial, product and furniture design in East Germany. 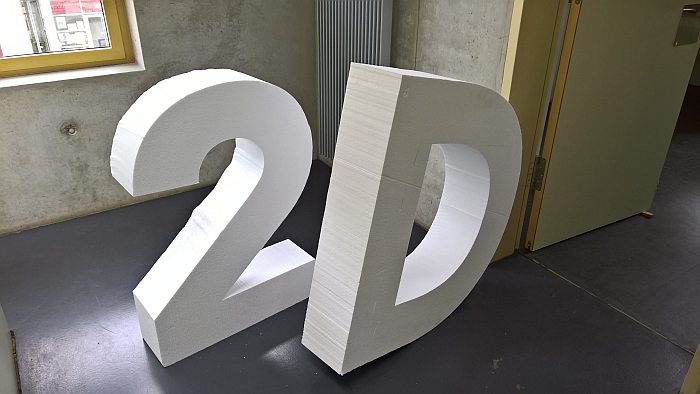 We’re no experts….. but we’re not convinced that’s right….

In terms of design the principle focus of the Burg Giebichenstein Kunsthochschule Halle annual exhibition was the results of the various undergraduate classes, and thus an exhibition which neatly explained how Burg students learn, and by extrapolation that what the students produce is secondary to why they produced it and the process and thinking that led them to produce it. Or put another way: there can be a lot more value in an unspectacular project from a well conceived class, than from a spectacular project instigated by the student themselves.

Amongst the classes we were particularly taken by Reisen in 3 Etappen – Travelling in 3 Stages – Stage 1 re-imaging Burg Halle’s very own delivery/cargo bike, Stage 2 designing a water bottle´and Stage 3 developing a walking cane; Exploitation/Exploration which involved taking a simple everyday object, the list of possibles included plunger, coat hanger, bucket, etc and creating something new; or the two Microbes classes, Microbes I exploring biomineralisation, so those microbes capable of producing minerals and Microbes II proposing possible uses for algae.

It wasn’t however all semester projects, the new Burg graduates were also present, including a room in which all the thesis that accompany the projects were presented, and which made very clear that studying design is as much about the theory and experimentation behind a project as it is about the final work. 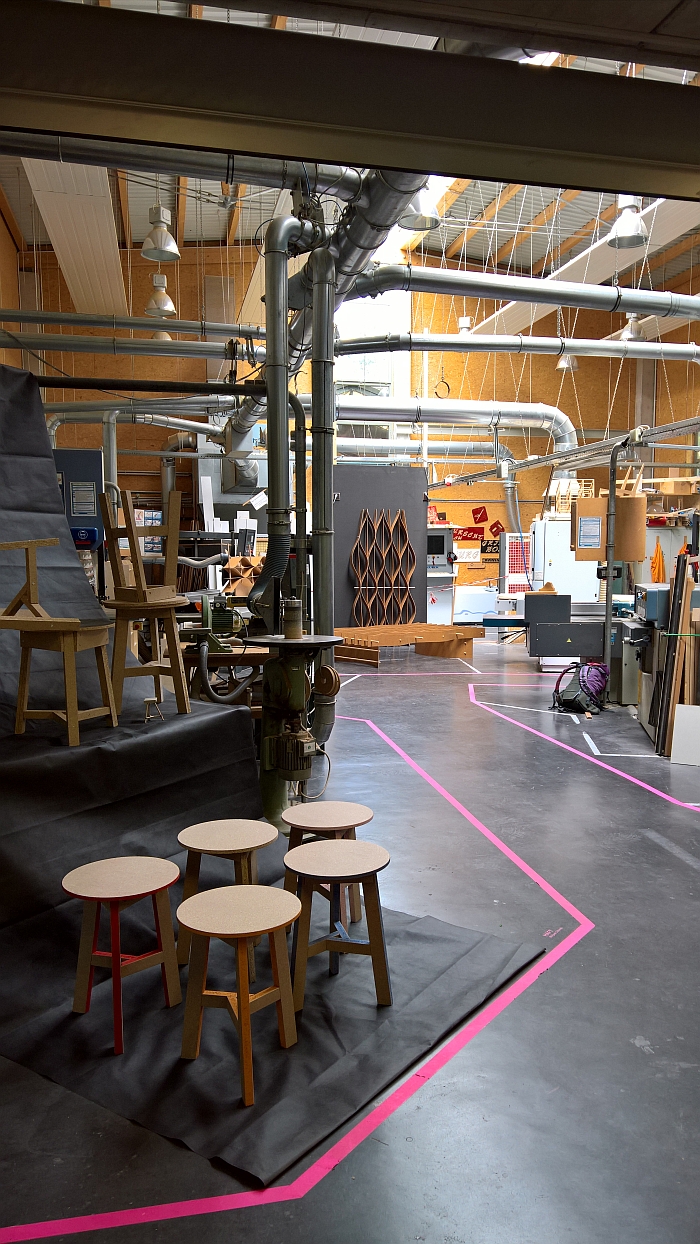 Raumgefühl – Perception of Space – proved to be a delightful lesson in the subtleties of how an object is used affecting how it is perceived. At least by us. When we first saw Raumgefühl it was sitting on a table, opening skywards like some exotic blossom. And while we appreciated the idea, for us as an object it just didn’t work, something about the proportions and scales distracted us.

Then a short while later we saw it hanging as a pendant lamp, and were much more taken.

Not much had happened to us between the two sightings, no major life changing or affirming events, other than walking some 30 metres, and so the differing appeals must have lain in the way the object was used.

As a hanging lamp the proportions and scales made much more sense to us, created an object with a quiet dominance over its space and one which is very much living the Art Deco dream: we’re seeing it hanging in the entrance hall of a late 1920s skyscraper apartment, below it party guests exchanging pleasantries over cocktails and peanuts while we look on, longingly, through the window.

Bird by Theresa Augustin is one of those delightfully indescribable objects. It isn’t actually anything, other than a form. And thus it is up to you dear reader to decide how, where and if you use it.

Primarily a versatile seating object, Bird would appear to offer two principle positions in which it can and could be used, Theresa however also proposes a third: one we can’t decipher. Which we really like, meaning as it does that the purchase is simply the start of a journey of discovery. Finished in brightly coloured powder coated metal, Bird is a thoroughly contemporary avian for home or office. 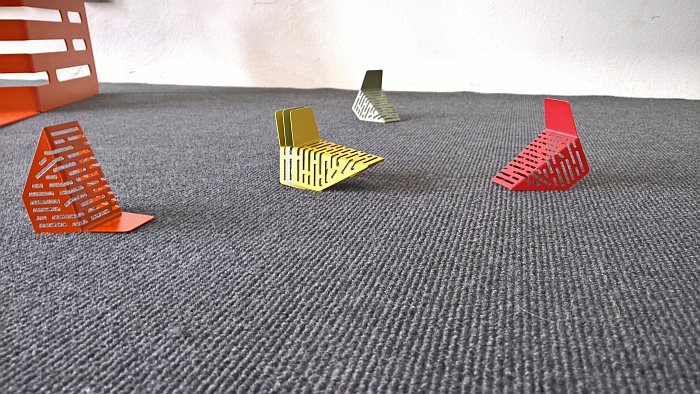 One of the things that design schools are good at, and which design students are always up for, is exploring novel materials and production methods, be that advanced scientific exploration or much more fundamental explorations of what is possible with that which is abundantly available.

With Reepwerk Marc Wejda and Rike Silz have turned what is otherwise organic waste spewed up by the Baltic Sea onto Germany’s north eastern coast into rope. Which would appear to be a very elegant solution. If one which, to judge at least from the examples on show at the Burg, has still got a bit of development work to be done; but which does offer not only an interesting new material, and potentially a whole new craft industry, but also, as Marc and Rike hope, the basis for a debate about how the abundance of Eelgrass can be creatively used. It needn’t just be rope. 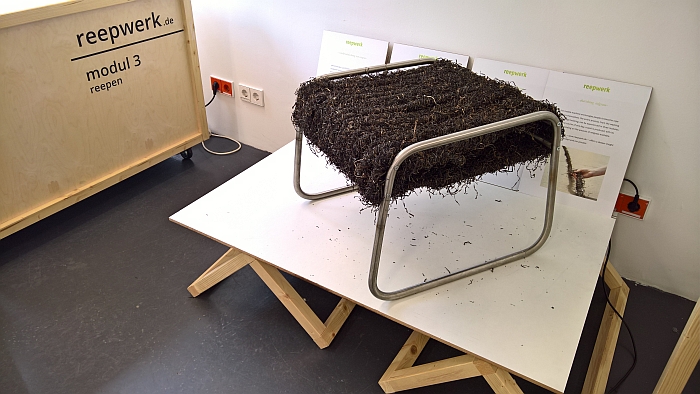 As regular readers will be a aware we have an, at best, tempestuous, relationship to readymades, but not a general rejection of. While not a readymade in the strictest sense, we’re going to classify Sitzen Stehend Leute as one, for a real bike chain could provide seating for but a vole. It has to be scaled up to become human useful. Do that, as Amélie Ikas and Chris Walter have done, and you get the most gratifyingly logical and playful public seating solution, users being free as they are to move and realign the links depending on how and with whom they want to communicate. Or not. And thus one has a very simple, animated and ever changing seating landscape.

The transportable rechargeable lamp has relatively quickly established itself as a lighting genre. Essentially the next stage of an evolution that began with the candlestick and moved over the oil and paraffin lamps, such objects allow you to carry your lamp wherever you need it: from the garden into the living room and then on to bed.

In that respect MI: isn’t new, also formally it doesn’t go any particular new ways, but what MI: does very well is extend the range of possibilities. And that through nothing more complicated that a locking mechanism on the handle. A locking mechanism which allows MI: to be hung up, for example from a tree. Other transportable rechargeable lamps can also be hung up, but MI: can be flipped so that the light shines helpfully and practically downwards, rather than artistically upwards. Nothing revolutionary, but a very nicely thought through and realised project.

Full details on Burg Giebichenstein Kunsthochschule Halle can be found at www.burg-halle.de 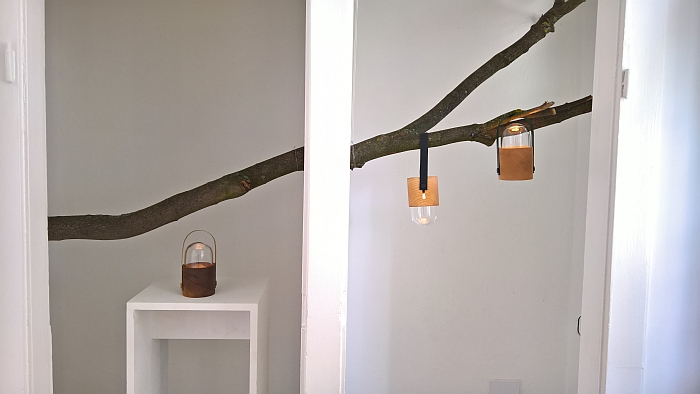