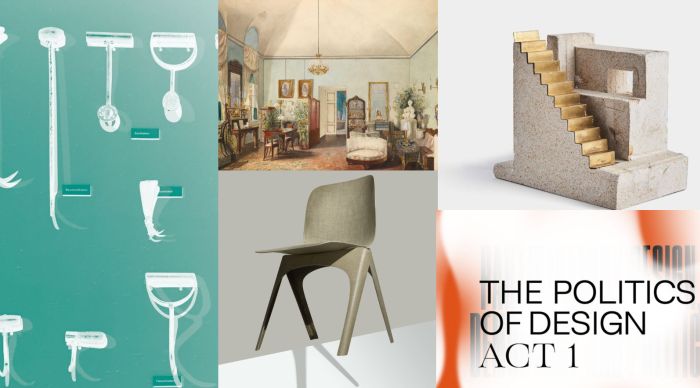 “Furniture for a Body’s Every Whim. The Age of Historicism in Russia” at the State Hermitage Museum, Saint Petersburg, Russia

And in doing so very neatly highlights just how often the keen observer and documenter of trivialities Zola makes reference to such, and therefore underscoring the importance of furniture and soft furnishings as indicators of wealth, status, cultural maturity and, for those for whom such is important, how fashionable one is. Manipulatable indicators. But indicators. And indicators which remain as relevant, and manipulable, today as then.

Yet whereas we all understand contemporary furniture references, many historic furniture forms no longer exist today. Or at least not in their historic form/function.

Among the stated aims of Furniture for a Body’s Every Whim is to explain the furniture habits, fashions and movements in mid-to-late 19th century Russia, through that period of romanticism when a “period style” as such didn’t dominate, when all manner of competing forces were at work, all manner of furniture and home furnishing objects available, and which as an exhibition therefore promises to provide an insight into Russian domestic spaces of the period, and by extrapolation into Russian society at that period; while also helping explain some of the furniture references in works by the likes of Fyodor Dostoevsky, Leo Tolstoy, Anton Chekhov or Nikolai Pavlov who is quoted in the exhibition title

In addition to furniture objects, including objects from Saint Petersburg’s Winter Palace, Furniture for a Body’s Every Whim also promises to present images of 19th century Russian furniture showrooms as published elsewhere in Europe and which should, hopefully, not only help elucidate how furniture design in Russia developed in the course of the 19th century but also what the rest of Europe learned from the Russia and what Russia learned from the rest of Europe.

Furniture for a Body’s Every Whim. The Age of Historicism in Russia opens at the State Hermitage Museum, 2, Palace Square, Saint Petersburg on Saturday August 11th and runs until Sunday November 11th

“Christien Meindertsma: Beyond the Surface” at the Vitra Design Museum Gallery, Weil am Rhein, Germany

A 2003 graduate from Design Academy Eindhoven it should come as no great surprise that much of Dutch designer Christien Meindertsma’s work is conceptual, experimental, in nature, often research rather than product/object based and which in Christien’s case invariably concerns itself with materials, production and globalisation: as neatly demonstrated by projects such as Pig 05049 which followed all the varied international roots the component parts of a slaughtered Dutch pig take, including to uses as varied as ammunition, chewing gum, porcelain and of course food, including deep fried snout.

But it’s not all theoretical, in 2015 research began in 2009 into possible uses for flax, a plant once commonly employed in the Netherlands but now largely an export crop, resulted in the Flax Chair. Realised in cooperation with Dutch manufacturer Label/Breed and featuring flax mixed with biodegradable polylactide (PLA) the Flax Chair is not only a thoroughly charming object in its own right, but also a project which offers one of the most interesting alternative new materials for furniture design.

And it is Christien Meindertsma’s many and varied explorations and considerations on materials that forms the central focus of Beyond the Surface, an exhibition which promises a presentation of projects such One Sheep Sweater, Bottom Ash Observatory and Flax Chair, and thus a selection of projects which illuminate the various strings to Christien’s bow.

According to the Vitra Design Museum Beyond the Surface is the first museal review of Christien Meindertsma’s oeuvre, and therefore a rare and very welcome opportunity for an insight not only into the work and methods of Christien but also contemporary approaches to design, design research and, ultimately, product development.

Christien Meindertsma: Beyond the Surface opens at the Vitra Design Museum Gallery, Charles-Eames-Str. 2, 79576 Weil am Rhein on Saturday August 18th and runs until Sunday January 20th. 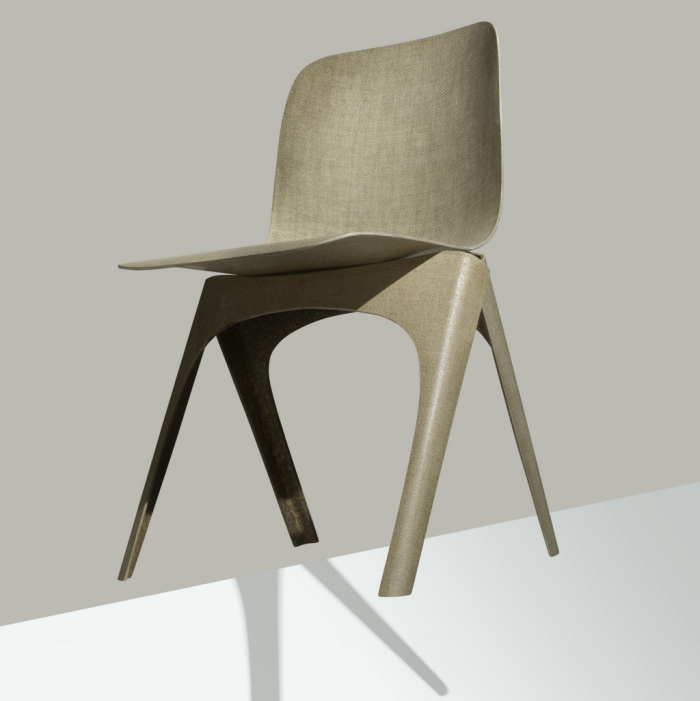 As a general rule, when deciding if we find something beautiful or not we all tend to rely on signals, less signals intrinsic to that which we are observing as much more external signals defined by factors such as culture, convention, education or public opinion, no one wants to be the only person not to find any given object attractive.

With Die Schönheit der Ding – The Beauty of Things – the Kunsthalle Rostock promise an exhibition of everyday objects deprived of their familiar context, of the signals of which we rely, and presented purely as a physical form and thereby an exhibition which explores the question from a very fundamental position, one which challenges the viewers to asses the beauty, or otherwise, of an object purely on its shape, dimensions, scale, proportions, and which thereby promises to offer insights into how we all assess beauty, of the importance of shape, dimensions, scale, proportions and, ultimately, questions the importance of the external signal on which we rely.

Prototypes and models have long been important tools for all creatives working in 3D genres, and remain so today in our digital age. By way of exploring the contemporary relevance and function of the prototype and model the Aram Gallery London instigated in 2008 an irregular series of exhibitions exploring the use models and prototypes by contemporary practitioners, and for the series’ 10th edition are focussing, as the title so subtly explains, on architectural prototypes and experiments.

Promising an exploration of the architectural model as a tool for the development of ideas as much as for formal presentation purposes, Architecture Prototypes & Experiments will feature colour tests, construction models, façade studies and a range of further model typologies from architectural practices as varied as, and amongst many others, Neri & Hu, Rural Office for Architecture or Adjaye Associates in a presentation which aims to deepen all our understandings of the creative process and also, one would imagine, presenting a case for the importance of the analogue and tactile in a digital, virtual future. 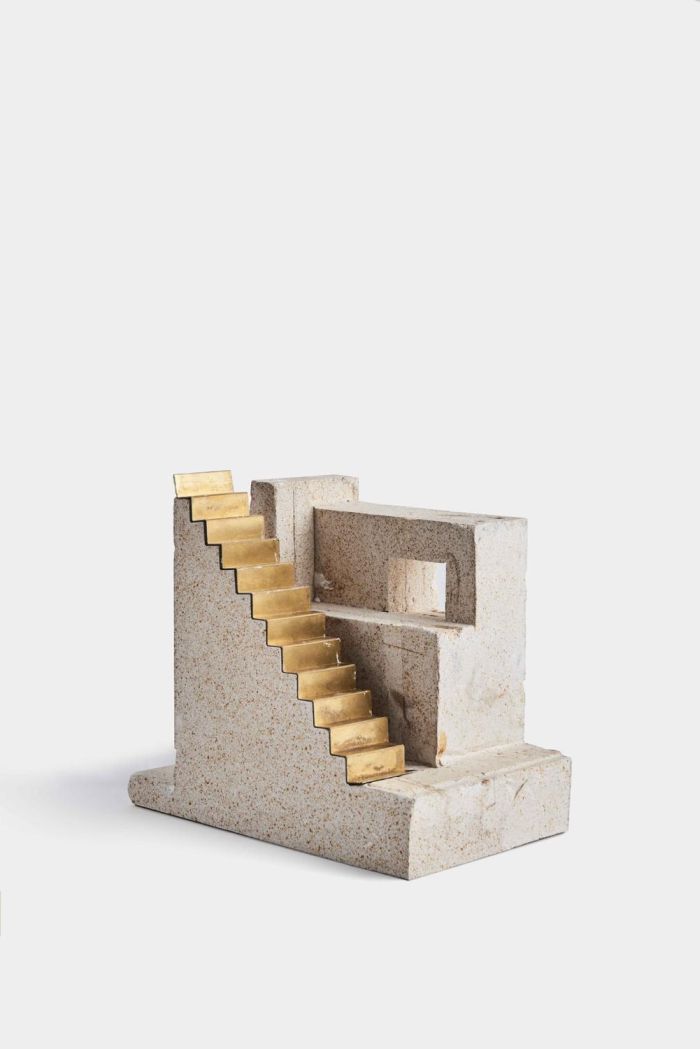 “The Politics of Design: Act 1” at Z33 House for Contemporary Art, Hasselt, Belgium

Whereas superficially design was long about form and function, in essence it has always been political, maybe not directly, but through its reflection on and responses to contemporary social, economic, cultural realities design has always been so closely related to politics as to be indistinguishable from it.

And in recent decades design has become ever more provocative and belligerent; maintaining its associations to politics but increasingly challenging political conventions.

Presented in conjunction with the 15th International Participatory Design Conference The Politics of Design: Act 1 promises a presentation of some 20 participatory design projects by and with designers as varied as, and amongst many others, Ann De Keersmaecker, Nils Norman, Kristof Vrancken & Judith Seng, and which are focussed on/involved with/effective at one of three levels of participation – Body, Community, City.

Aiming to approach answers to questions such as how does design give form to different ways of participating? or, what values are sustained and what kinds of futures are imagined in the current political agendas of designers? The Politics of Design: Act 1 sounds like being not only an interesting exploration of design’s role in social & political discourses but also the wider question of how designers can serve society rather than industry/commerce.

The “Act 1” in the title is not some Belgian affectation but much more a reference to the fact that it is the first in a series of such exhibitions, exhibitions which should, all going to plan, culminate 2020 in The Politics of Design Festival 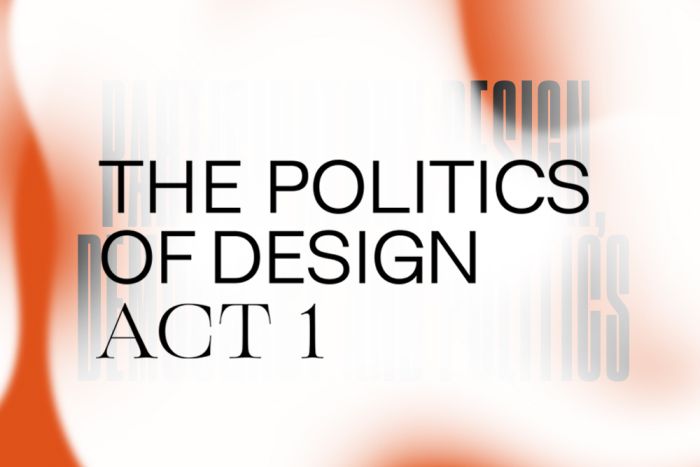 The Politics of Design: Act 1 at Z33 House for Contemporary Art, Hasselt