In context of the Radio smow Sofa, Couch, Settee Playlist we briefly discussed the settle as an early forebearer of the settee.

Existing in a myriad expressions and forms, one variation on the settle was a pleasingly multi-functional, multi-talented, culinary adept, object.

And one that has, sadly, vanished from the contemporary furniture landscape……. 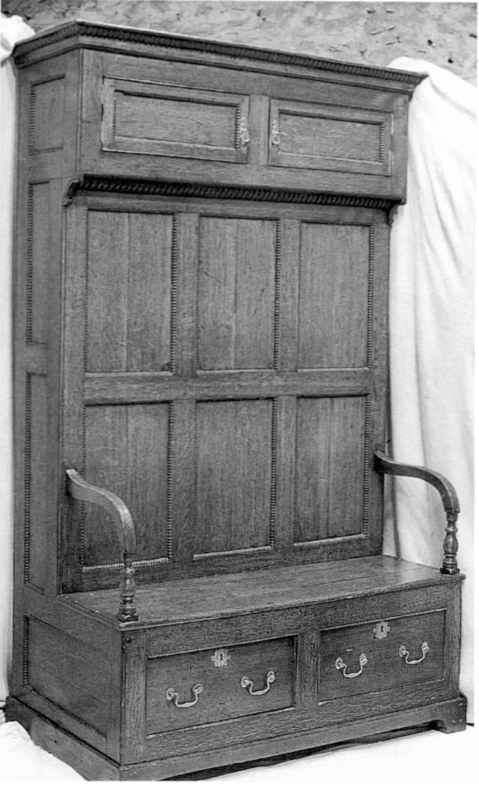 Originating in the middle ages, John Gloag suggests they were known as early as the 12th century1, settles varied between utilitarian, rustic wooden benches and much, much more representative wooden alcoves, yet regardless of form and formal expression, generally served as a room divider: the seat towards the fire, the back towards the house door, where its high backrest kept out the draughts and allowed for convivial sitting. A particularly high backed variation being the so-called bacon settle, an object which often, though not always, features storage space under the seat and always features, as its defining feature, a cupboard integrated into the backrest: a cupboard in which to cure your bacon.

Now, when we first stumbled across the bacon settle we got extraordinarily excited, because we thought you smoked bacon in them.

We may have been following a vegetarian/vegan path for many a happy decade, a path we have neither interest nor desire to divert from: but we are still liable to get overly excited about a furniture object which combines functional, homely, sitting with the smoking of bacon. The thought of the gentle heat under the seat, the warming backrest and the smell of slowly curing pork, making us come over all unnecessary.

But you don’t smoke bacon in them.

Although with a couple of very simple modifications you, arguably, could.

Much more they were involved in the curing of bacon through drying, a practice that was, apparently, commonly practised in the West Country of England where such bacon settles were the predominant type2, and which saw the salted bacon joints hung in the cupboard and where they would stay not only dry but also safe from rodents, birds, squirrels, etc…..

Which is close to genius. 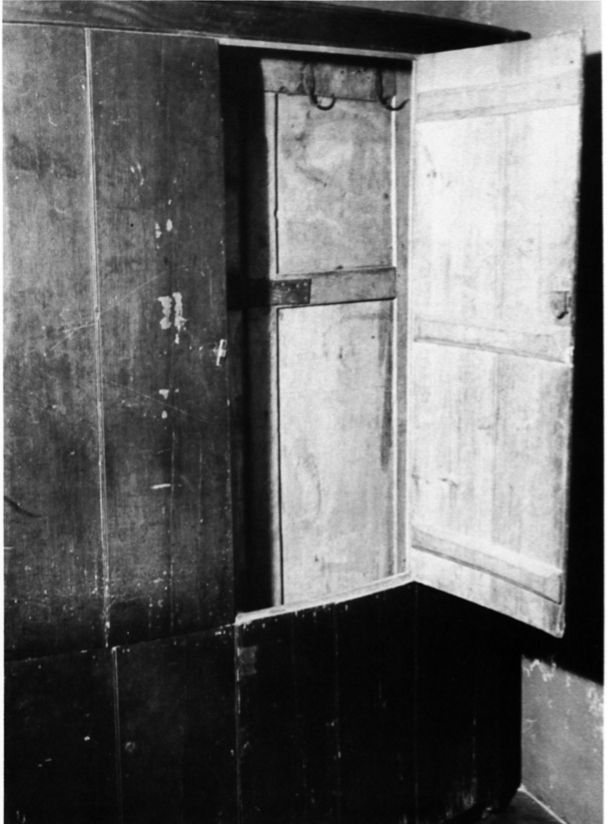 View inside a bacon settle with hanging hooks visible in the top right corner….

Yet close to genius as the settle’s role in the curing of bacon unquestionably is, not all follow the story, there are those such as David Knell who suggest the bacon story might not be the full truth, that the cupboard may just have been for the storing of outdoor clothing;3 however, such voices can provide no evidence to back up their claim, and so we feel justified in ignoring their opinions. However do admit that (a) the argument is logical, certainly as plausible as the bacon story, (b) we can’t verify the origins of the name “bacon settle”, imagine that it is a relatively recent term, certainly younger than the object, and such later applied terms, often developed by the antiques trade, are prone to creating misleading associations. Nor (c) do we have any evidence ourselves that bacon ever hung in them, we can find no historical basis for the claim, no etchings, no paintings, no notes in 15th century writings, no 16th century literary references etc… Just the much repeated claim that that is what happened.

And thus while sticking to the bacon curing story, we are happy to combine it with a more general storage use tradition.

Not least because while we are absolutely convinced that there are many a meat-obsessive hipster out there who would, especially under the current realities, give all their tattoos for a settee in which to smoke their bacon/dry cure any available meatstuff; as a combined room divider/cupboard/chair it has something of the appeal of George Nelson’s Storagewall: it makes space available that otherwise would be inaccessible, creates functionality from air, and thereby expands the functional area available in a fixed space without itself taking up any already utilised space. And thus the bacon settle is unquestionably a concept calling out for a contemporary re-imagination, a re-working appropriate for our world of smaller flats, limited space, multi-use domestic environments, and an ever more urgent need for multi-functional, multi-talented furniture…. and home dried herbs.

The nature of long lost furniture designs is that there are often only very, very few images of them, with the bacon settle that is not the case, there are a great many. And an equal number of copyright problems with the available images. But do a google image search for “bacon settle”. You won’t be disappointed…..

PS. Since we called for contemporary re-imaginings, an example of a no longer available and of a never before attempted variation that we believe illustrate the necessity and logic of the contemporary bacon settle…… 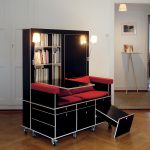 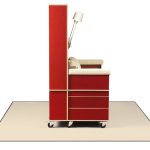 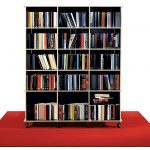 One of the problems with the traditional bacon settle is that while your situation, your needs, will invariably change, your wooden bacon settle can’t really. A modular system, such as that offered by the USM Haller Bacon Settle, can. Not only can it adapt in terms of size, growing or shrinking as required, but also in terms of allowing for the easy altering of storage options/functionalities, while with the eHaller system you can not only integrate lighting into your bacon settle, but USB chargers, thus updating the traditional object in a multitude of most satisfying ways. 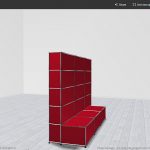 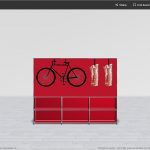