smow in Milan: And loving that Venice feeling

They say that in every life a little rain must fall. The amount that has fallen in Milan in the past 24 hour is however ridiculous. 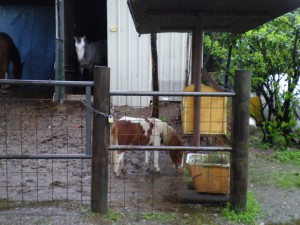 It has rained so much in Milan the horse has shrunk

As it is, however, we were forced to flee our tent at 3.15 this morning – enjoyable as the water bed effect through the tent floor was, we have an awful lot of state of the art technology with us, and two Moleskine notebooks, and weren’t keen to test how waterproof they all are.

As we arrived at the campsite cafe the first evacuees were already making themselves at home and in the course of the night/morning ever more were to join us. 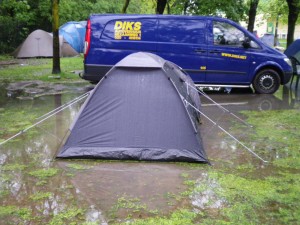 What we found a little disappointing was the number of Dutch teenagers seeking refuge. Had their grandparents found themselves in a similar predicament they would have simply constructed a network of dykes and so both diverted the rainwater away from the tents and artificially lowered the ground water level thus preventing any further problems. And in all probability they would have then used the reclaimed land to raise a new breed of cattle that produced milk with a particularly low water content from which one could make an excellently creamy, hard cheese.

That the current generation of Hollanders instead choose to flee half naked into a campsite cafe is truly a sad indictment on the current state of Holland.

We blame the euro. 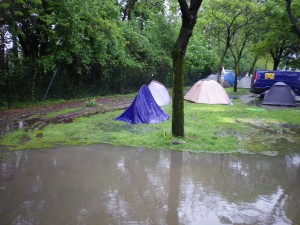 Camping in Milan can be recommended - just avoid the pitch in bottom left-hand corner of the site.

However, we know and appreciate that around the world there are thousands of persons who are forced to flee their homes under much more distressing conditions. And if they worst we have to do is get up three hours early in order to avoid a wet laptop then we know we can count ourselves very lucky.

And finally a big thank you from us to the staff at Camping Milano for the friendly and uncomplicated help and assistance they offered in the night. Much appreciated. 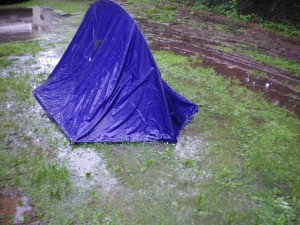 The (smow)tent at 7.30 this morning - Like the Galstonbury Festival, just without the troublesome music.