red dot Awards 2009: Best of the Best Awards for Vitra and Artemide

We’ve previously stated our quiet dissatisfaction with awards ceremonies and for all there omnipresence. But love ’em or loath ’em when they are good they are one of the best ways to help consumers separate the chaff from the rye – or at least from amongst those producers who pay the entrance fees…. 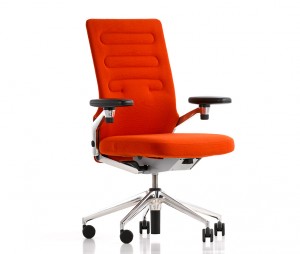 AC 4 by Antonio Citterio for Vitra

Among those honoured as “best of the best” are Vitra with their AC 4 office chair from Antonio Citterio. Launched at the Orgatech trade fair in 2008 the charm of the AC 4 is less the sophistication and finesse of the ergonomic features, rather that they are hidden within the chair.

But our friends at Vitras explain it all much better then we can:

That Artemide would be among the prize winners was, more or less, to be assumed. That they won a “best of the best” for a lamp in their architectural range less so.

Artemide is divided into two main business units: “Artemide” who deal with individual lamps be they wall, floor or pendant and “Artemide Architectural” who deal with complete indoor lighting systems. The “normal” Artemide division won a “best of the best award” for the new Noto pendant lamp from Michele de Lucchi -a wonderfully flowing lamp which reminds us of a whale in a strange conceptual sort of fashion.

Kao by Bruno Houssin for Artemide

In addition Artemide Architectural were awarded a “best of the best” for their Kao lamp by Bruno Houssin. Initially presented at the Milan Salone International 2007, Kao is a modular system using 24w and 54w t16 fluorescent lamps. Four standard 2d and 3d kits can be installed individually or combined to create sophisticated and spectacular configurations; these kits are delivered with a drilling stencil for placing the ceiling fixing points.

Congratulations to all the winners.
And although you will not find any of the above products at smow.com, as ever smow can supply the full range of Vitra and Artemide products.  A short phone call or email is sufficient to ensure a quick, competent quote.