In the past few months we’ve had the privilege and misfortune of viewing several student showcases. These have ranged from the wonderful, such as the kkrraalls show in Milan from the students of the Staatliche Hochschule für Gestaltung Karlsruhe, over the disappointing (Cranbrook College in New York) and not especially good (Weimar Uni. Milan and Berlin) onto the outright pointless  – in particular we think on the show in Milan by a nameless north European-based college. 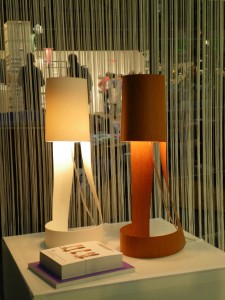 The show from the students of Burg Giebichenstein College, Halle fits into the upper half of what we have seen.
We sadly missed Burg Giebichenstein in Milan – although we believe their tents were not too far from ours – and so can only base our judgement on what we saw here in Berlin.

And what we saw was undeniably a student show; containing as it does all the elements student shows must contain.
Which isn’t to be dismissive. As a general rule students shows are not about products intended for sale; rather, they are about showing how the students handle different tasks and challenges, as well as what they understand from function, form, aesthetic and the like. 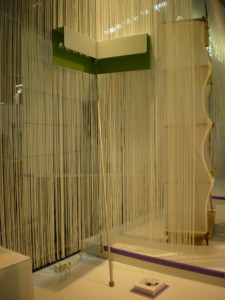 And so while there were some articles where the designers had clearly just been toooooo clever, the majority of the pieces on show demonstrated a solid understanding of both the designers responsibility and the design process. And in couple of cases even a good commercial judgement.

But most importantly regardless of the assessment of the individual item, one could always see and appreciate the undoubted talent that lay behind the works.

Which at the end of the day is the most important factor in student showcases.

We were suitably impressed.

More details on the products and designers can be found on the Burg Giebichenstein “Graduate 09” exhibition homepage. 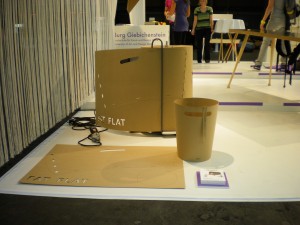