In what is quite possibly the most eagerly anticipated announcement of 2010, Apple Supremo Steve Jobs will unveil the companies latest product in San Francisco on Wednesday.

Is this the iSlate?

Rumoured the be called iSlate, or possibly iPad or iTablet, the product is expected to combine the functionality of the iPhone with that of the iMac in a flat, transportable, keyboardless computer; thus allowing the user to write, draw and calculate anywhere.

In effect a chalkboard for the 21st century.

What may surprise many of you, however, is that not only is the history of the chalkboard itself Germanic, but also Apple’s approach to design has it’s roots in Germany; and indeed even Apple’s nomenclature system is based on historical German syntax.

The iSlate is, therefore, German.

The centre of the global chalkboard industry was Steinach in Thuringen. From this idyll of forest and streams some 30 million chalkboards were produced and shipped to all corners of the globe, before production finally ended in 1968. The towns “Chalkboard Museum” provides a wonderful overview of the history of chalkboard production in the area and is well worth a visit next time you are on the Rennsteig. According to the operators, the decision as to whether the iSlate will feature in the exhibition will be made after Steve Job’s official unveiling.

And confirmation that it is called iSlate. 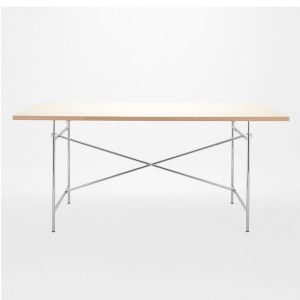 The classic Eiermann Desk by Egon Eiermann from Richard Lampert

But long before Jonathan iVes started reinventing the way we think about products, the Germans were already doing just that.

The iRmann desk by Egon Eiermann is perhaps the best example of just where the Apple approach to product design originates from.

The name “iRmann” originates from a popular anglo-frisian construction whereby the phonetic “i” was treated as inferior in written forms and so the second letter was written as a capital. The lower case i remaining for sake of clarity alone. Popular in Egon Eiermann’s native Brandenburg and neighbouring Berlin, this practice died out as ingvaeonic languages finally ceded to modern German in the 1980s.

It is generally accepted by academics that Apple’s use of the lower case”i” in front of words such as iPod or iPhone has similar origins and is associated with Steve Job’s Frisian ancestry.

Today the iRmann desk is produced by Richard Lampert; albeit under the name Eiermann Desk

And today both Apple products and iRmann desks are used globally by architects, designers and other creative people.

Which can’t be a coincidence.

The iRmann desk is wonderfully complemented by George Nelson’s iClock from Vitra.

The name iClock is a cheap pun we thought up to fit the article into this post.

You can read full details on the iSlate here, once Apple have made the formal announcement in San Francisco 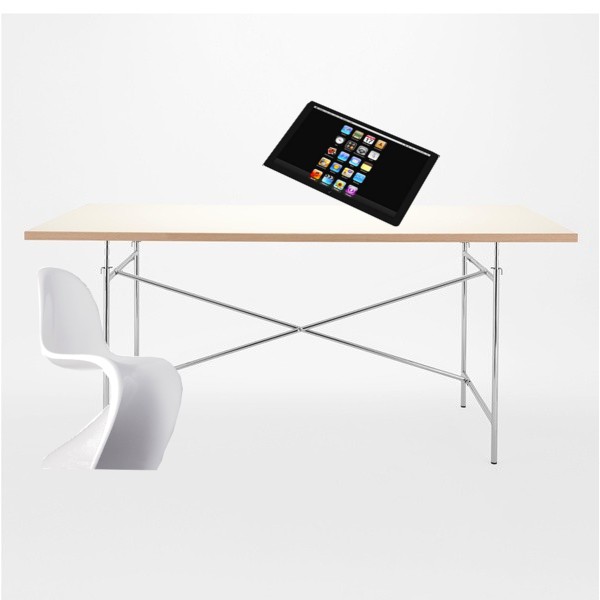 iSlate and iRmann desk with a panton chair... is this the future of creative office design?