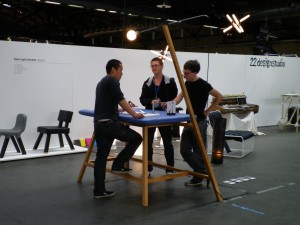 Adenike by Bao-Nghi Droste - as seen at DMY Berlin 2009

For us there are many highlights to the (smow) design year, Milan, London, Brussels, Copenhagen…. and of course DMY Berlin.

DMY Berlin isn’t the biggest design fair, but what it lacks in quantity it more than makes up for in quality. And for 2010 the organisers have not only found a new location; but also a new jury structure.

The three permanent members will preside over the jury for the next three years, a decision which in our minds can only improve the quality of their decisions and so the standing and importance of DMY Berlin.

We believe on facebook people would give that a thumbs-up.

Now we know Ms Jongerius was there last year because we spied her quietly perusing the DMY Youngsters exhibition.

And so for those of you wanting to be part of the competition, and potentially impress Hella Jongerius and the other judges: The final deadline for entries is March 10th

Full details can be found here