On March 4th 2012 the Grassi Museum for Applied Arts Leipzig opened the final part of their permanent exhibition.

An exhibition very close to our hearts.

Now you know us, we ‘ve nothing against baroque or ancient Japanese furniture and objects.

But our hearts do beat a little faster when we get to the late 19th century.

It’s all there in “Art Nouveau to Present”

Plus a monumental bedroom ensemble by Ron Arad constructed from scaffolding poles. 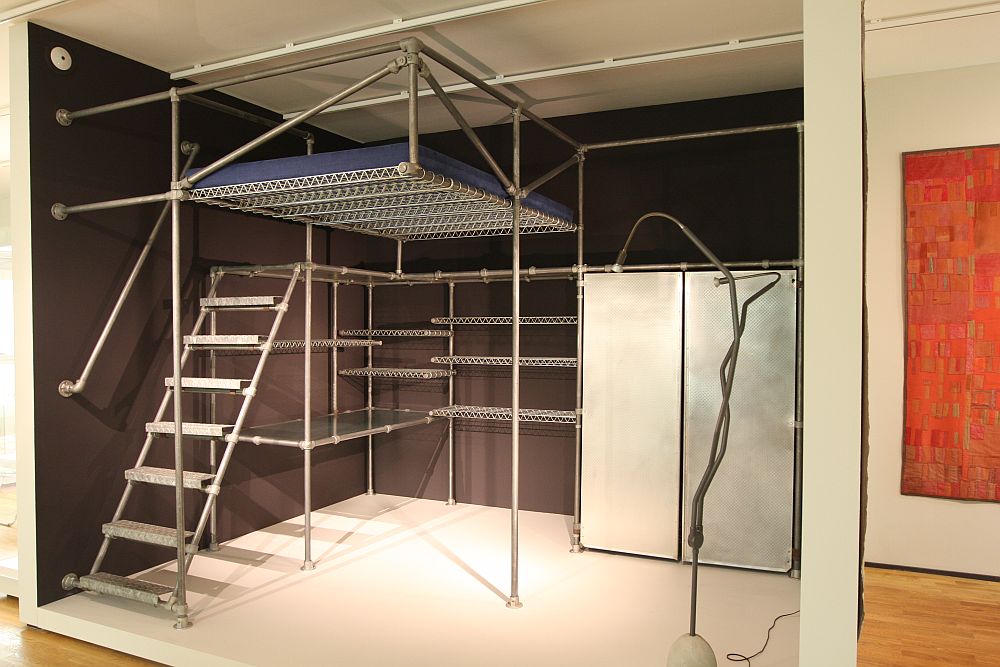 A 1980s bedroom/study ensemble by Ron Arad. As see at the Grassi Museum for Applied Arts Leipzig

As the name tends to imply “Art Nouveau to Present” starts in the late 19th century before continuing over Art Deco and the uncontrolled pomp of the early 20th century until Functionalism, Bauhaus and Modernism rip everything back down to the bare bones.

The second world war is then poetically skipped via the most delightful staircase.

Aside from the collection of porcelain coffee pots, the first thing that attracts your attention on the ground floor is the Charles and Ray Eames‘ RAR. And then a table and chair ensemble by Eero Saarinen, perfectly illuminated as they are by an AJ Royal hanging lamp from AJ. Arne Jacobsen.

The exhibition then continues over the uncontrolled pomp of pop art and post modernism before ending with Sinneslandschaften, a multi-media room installation by Axel Buether and a team of his students from Burg Giebichenstein Halle.

Among the numerous highlights in “Art Nouveau to Present” one real star is the re-creation of Lilly Reich’s display stand for Wilhelm Wagenfeld‘s Vereinigten Lausitzer Glaswerke (VLG) glassware collection as seen at the 1936 Grassimesse. Fascinating as the works themselves unquestionably are, for us the principle interest is how the display beautifully underlines that the principle role of museums is documenting.

In this context a further highlight is the numerous “room set-ups” scattered throughout the exhibition. Although not especially large, they do allow one to view the furniture in situ; a little detail that really helps in understanding the relation of the pieces to one another.

What “Art Nouveau to Present” also does very well is to mix design from “East” and “West” and so one finds, for example, a 1962 vacuum cleaner from VEB Elektrowärme Altenburg sitting next to a Braun SK 5 by Dieter Rams and Hans Gugelot. Or the aforementioned Eames RAR next to Erich Menzel’s “Model 50642” for VEB Sachsenholz Hellerau. A mixture that works. Because it simply ignores the political situation in which the works were created and concentrates fully on the objects and their relevance. 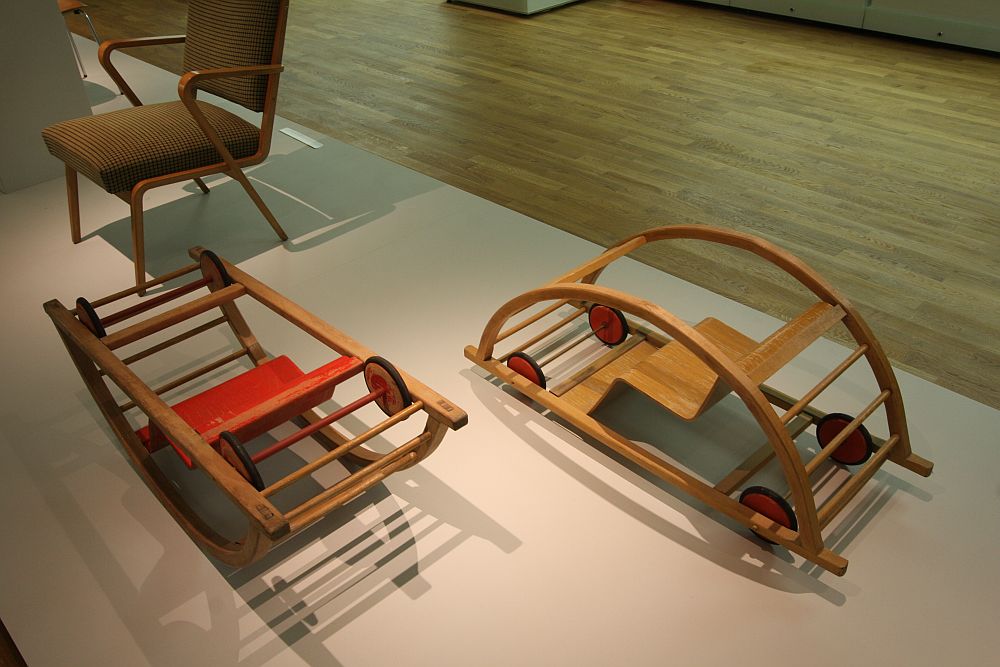 Kinder Schaukelwagen by Hans Brockhage & Erwin Andrä. If you'd been in our office in the past six months you'd understand why this amused this....

Where for us the exhibition does suffer is the curators less than successful attempt to deal with the depth of the subject. The Grassi Museum obviously have a wonderful collection of objects. And equally obviously don’t have the space to display them in a fashion that allows for a dialogue of any real depth.

And so for “Art Nouveau to Present” they have brutally compromised with a very old fashioned exhibition concept that sees the majority of the objects simply placed in a room with a description of what it is. A concept that crams an awful lot into too small a space and as such overpowers the visitor. Even we found our interest occasionally waning on account of the monotity and lack of genuine interaction.

As we said in the context of “From Aalto to Zumthor Furniture by Architects” for a permanent exhibition one can get away with such a concept. The question is of course if one is satisfied with having gotten away it.

Or if as with having gotten away with cheating on your partner, you shouldn’t at least have the decency to feel a permanent twinge of guilt. And possibly eventually admit the error.

It will be interesting to see how the forthcoming special exhibitions redress this situation.

Because aside from the obvious joy at the individual items, it truly does “close” the Grassi Museum’s permanent exhibition in that it allows one to follow the development of design and so to understand where modern design comes from. And how “modern design” is to be understood in the context of “historical design”. 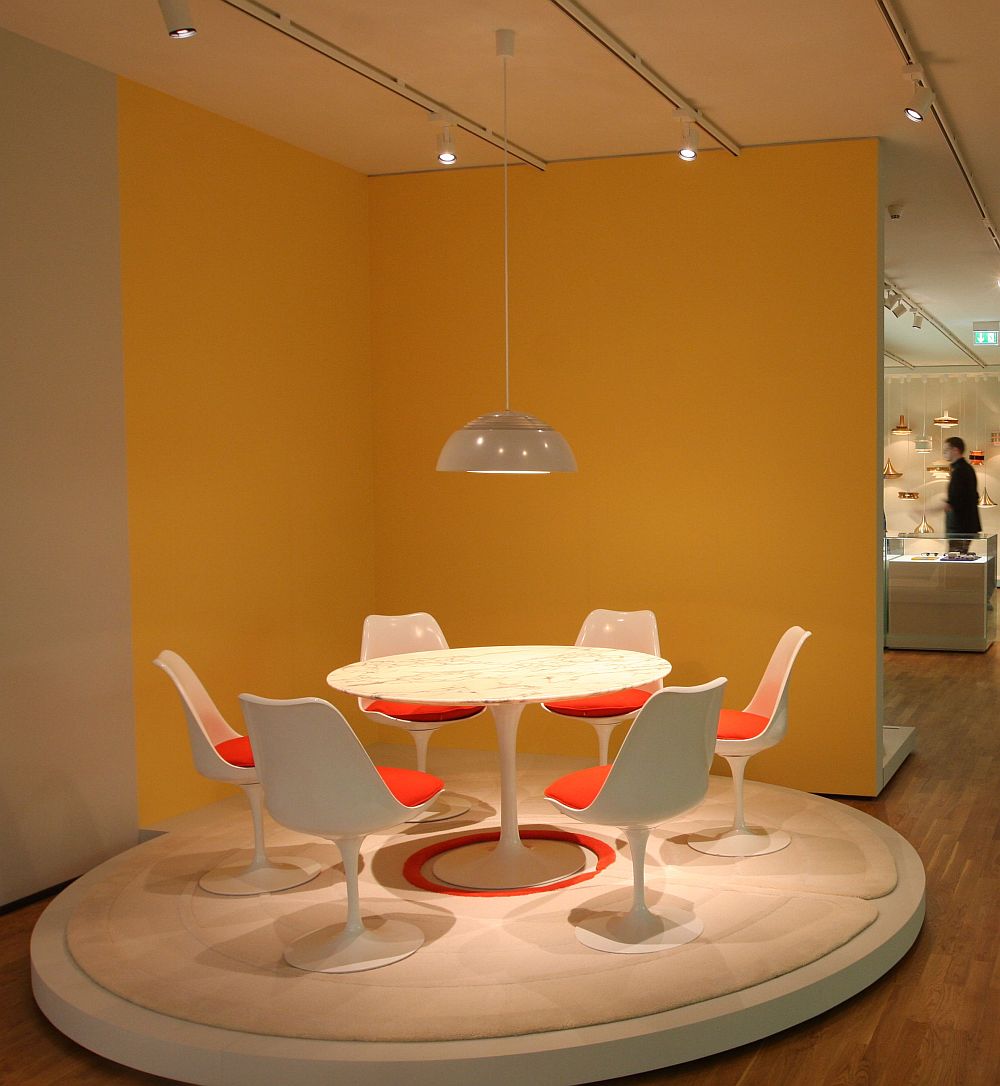