Although we know better, sometimes we could almost believe that this blog is planned.
In our “Belgium is Design” post from Milan we wrote

“Tim Baute from interror was for several years one of the true highlights at Designers Fair in Cologne.”

And a couple of weeks later in pops the information that he will be making his debut at DMY Berlin.

If his new “Stealth” product range will be a highlight remains to be seen. And certainly the competition is tough.

New Zealand designer David Trubridge, whose Kete lamps blew us away at Milan 2009, will be presenting his Mini Grow Seed System kitset lights, the ökay project by Berlin based Philipp Kaefer looks very interesting as does Perspective_s from Poznan which promises an overview of contemporary design in the Wielkopolska region of Poland.

To name just three from a very interesting exhibitor list.

An exhibitor list that features an awful lot of Dutch exhibitors. We’ve not seen any information that Holland is a focus or guest country at DMY Berlin 2012.

But Tempelhof Airport will have a distinct orange glow.

In addition to the “established” range of exhibitions and events, DMY Berlin 2012 will also host the exhibition of all entries for the “Designpreis der Bundesrepublik Deutschland 2012“. We’re looking forward to seeing how they organise that.

As ever we’ll be in Berlin for the festival and will bring you regular updates, photos and interviews here in (smow)blog, on the (smow) facebook page and at smow.posterous.com

Do let us know what you think…… 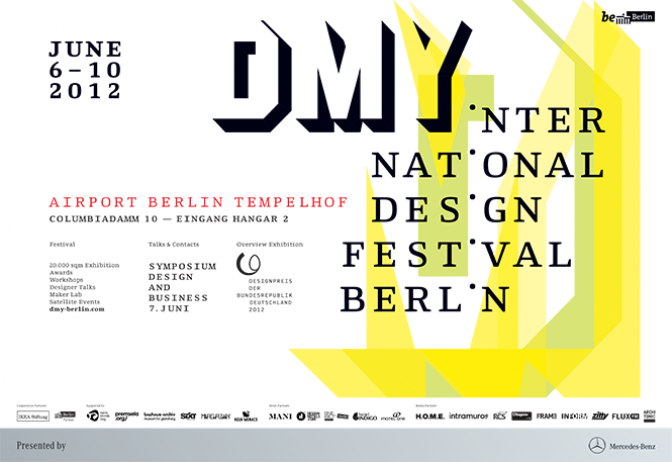