At the same time as he was developing the Ant Chair, Arne Jacobsen created a one-off range of office furniture that arguably represents the first tangible evidence of his move away from the natural materials and traditional handicrafts of his pre-war furniture and onto the mixed media, industrial products that have ultimately come to define his work. And so can truly be considered great lost furniture design classics.

Not least because they really are lost!

In 1951/52 – the records are a little unclear here – Arne Jacobsen was commissioned by the Copenhagen based shipping company Burmeister & Wain to produce a gift for the American Scandinavian Society and designed a desk, coffee table and side chair group.

The highlight of which is without question the desk. Quite aside from its reduced down simplicity there are two features of the desk that, for us, elevate it above the masses of desks available before or since.

Firstly there is the typewriter holder. A device that swivels through 90 degrees meaning that it can either sit in line with the desk – so out of the way. Or be pulled round next to you to be used. Which is just gorgeous. And of course although designed for a typewriter, these days it is perfect for laptop or tablet; thus making the desk just as relevant and functional today as it was then.

And secondly the drawers. Not just the fact that they are there, but much more the simple yet ingenious decision to attach them to the frame with chrome-plated tubes thus giving the whole structure a lightness that a more conventional solution would never have achieved.

The whole composition is just a joy to behold.

A further fascinating aspect of the project is the potential role of a young Verner Panton.

From 1950-1952 Verner Panton worked in Jacobsen’s studio and one of his jobs was developing early prototypes for the Ant Chair. In their monumental Jacobsen biography Carsten Thau and Kjeld Vindum write “Panton, who through PH’s [Poul Henningsen] friendship with the boss had been given a  job in the office began to create a range of steel wire prototypes that quickly grew to a sprightly collection standing on a box next to his desk”1

Could one of these prototypes have then mutated into the American Scandinavian Society chair?

We certainly know that Jacobsen wanted the Ant to be three legged chair, and so be extrapolation Panton must have been told to devise prototypes with 3 legs.

That is the great unknown.

We believe, but cannot prove, that Verner Panton was largely responsible for the chair.

In contrast the desk and coffee table are pure early 1950s Arne Jacobsen.

The group was made, once and once only, by the Copenhagen cabinet makers Rud. Rasmussen and formed part of a series of gifts from numerous companies to the American Scandinavian Society to celebrate their move to new offices in New York.

American Scandinavian Society records show that Burmeister & Wain donated furniture for the publications office, without noting any details of the items.

Or, more importantly, what subsequently became of them.

For in the intervening 60 years desk, chair and coffee table have vanished without trace………. 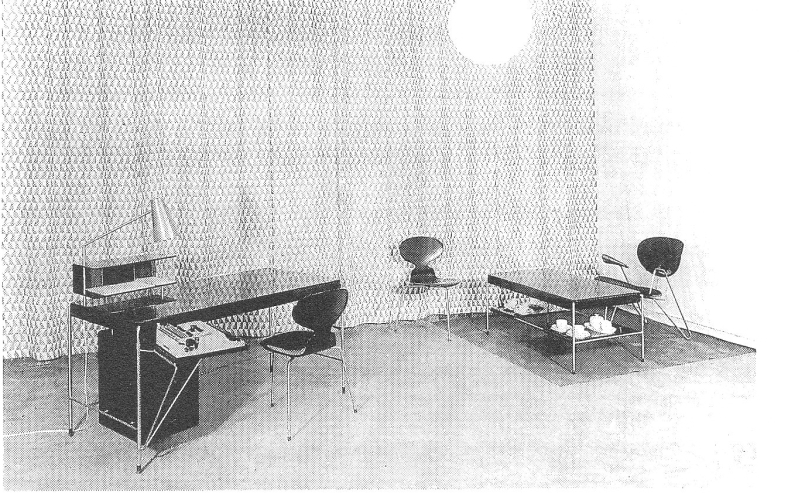 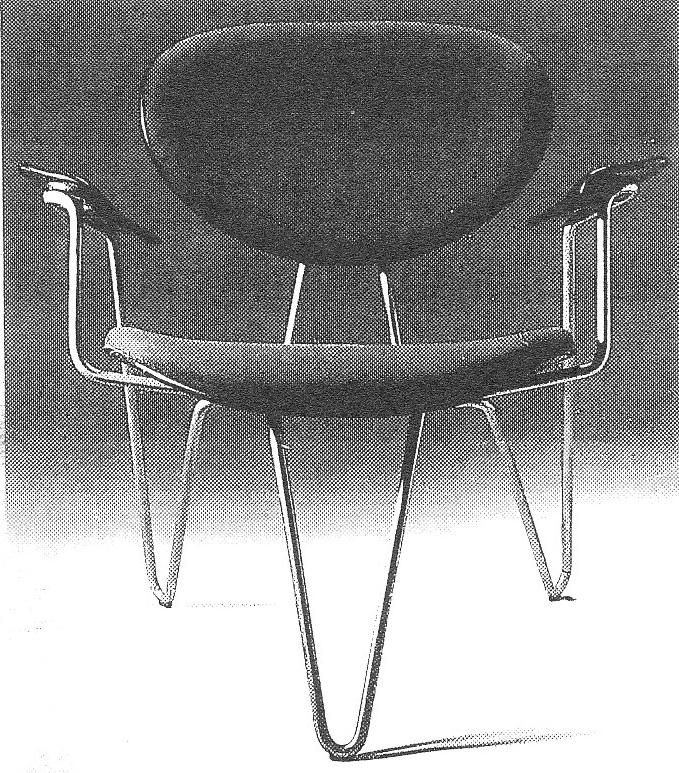 And the chair. For us more Verner Panton than Arne Jacobsen..... (Photo from"Arne Jacobsen" by Carsten Thau and Kjeld Vindum.)