Wandering round the Vitra spaceship at Orgatec there was one product that you simply couldn’t fail to notice.

On every table, in every Workbay, in every Alcove stood a lamp.

Not technically. Technically a lamp from Swiss producer Belux.

However since 2001 Belux has been part of the Vitra family and at Orgatec 2012 they made good use of their family connections to unveil the latest addition to their portfolio, U-Turn by ECAL Lausanne graduate Michel Charlot.

Older readers will remember our complete infatuation with Standing Task Light by Erik Wester, a lamp whose stand and shade can be positioned more or less at will through an innovative ball joint mechanism.

With U-Turn the lamp head is connected to the stand via a magnet and can not only be angled as required but can also be lifted off and flipped over meaning that the light can be directed either up or down.

The result is a lamp that offers true flexibility, can be pointed in literally any direction and consequently can be used to define the atmosphere in a room.

For example, shining directly downwards on your desk while you work and then backwards and upwards to provide a gentle, indirect light for the evening quiescence.

At the moment U-Turn is available as a desk, pendant, wall or standard lamp, 2013 will see the release of a “Clip” lamp and a dimmable version.

To find out a little more we spoke to Michel Charlot and started by asking about the background to the project…….

Michel Charlot: After I established my own studio in Basel I was in contact with Vitra, Belux is part of Vitra, they needed help with a project, and, thankfully, asked me if I could help. They already had the idea of a lamp based around a ball and a magnet, but it wasn’t really working, and they didn’t really know how to develop it further. It’s one thing to have an idea but another to then develop a product family around it and to give it a character and identity of its own.

(smow)blog: Very Nice! And so what was the first thing you did, throw everything out and start from scratch or…

Michel Charlot: Pretty much! The initial object was quite large, had two spots and worked with a different technology. And so yes I changed pretty much everything and what we have now bears no resemblance to what Belux had then. The basic idea of the ball and the magnet is the same but everything else has changed.

(smow)blog: As a young, relatively unknown designer, to turn up at a company like Belux / Vitra and say “It’s all rubbish! We’re starting again”, doesn’t sound like the easiest thing in the world…..

Michel Charlot: It is of course difficult to do such when you’re young and it is also difficult for the people you are working with. Design and design development is a lot about trust and obviously it is easier to trust someone like Antonio Citterio or Jasper Morrison who have more experience. But when you’re young it can be quite difficult to convince people to follow your ideas, especially if they are risky; however, I think in design it is important to take risks, because that’s how you get to interesting new results. And fortunately Belux were very supportive and open to the new ideas I brought into the project.

(smow)blog: And how long did it take to redesign it?

Michel Charlot: Altogether it took about two years. The challenge in the lighting industry is that technology is moving so quickly you can’t afford to spend too long on a project because there is a risk that if you do, for example, the LED technology will be outdated by the time you are finished. And exactly because the technology changes so rapidly we have constructed U-Turn so that in the future we can upgrade the LEDs. The U-Turn that you buy in two or three years will be the same product, but with the most up-to-date LED technology, which is one way of extending the life cycle of the product.

(smow)blog: You took on an existing idea and developed a product. Are you happy with the end result?

Michel Charlot: Yes, I’m very happy with it. The idea is very simple and it is a very coherent object. A goal for me is always to make a product obvious, in the sense of “Of course it’s like that” or “How could it be any other way”. I like it when people look at an object and find it “normal”, but that is something which is quite difficult to achieve and involves a lot of unseen work. For example in order to ensure that the lamp moves smoothly over the ball, but then remains in place and dosen’t slide down, involved an awful lot of development work on the magnet and the coating.

(smow)blog: A project with Belux is a nice start to your own studio, where do you go from here, can we expect to see other projects from yourself in the near future?

Michel Charlot: I’m currently working on a project with the Italian bag manufacturer NAVA which is also an industrial project that involves injection moulding, welding and other industrial processes. My real interest is industrial design. For me the industrial aspect makes it really challenging, but is also what makes it so fascinating and rewarding. Lots of young designers today tend to do more craft based or gallery projects, but that is not really a direction that interests me.

(smow)blog: Our final, inevitable, question. Orgatec is an office furniture trade fair. What does your own office look like?

Michel Charlot: I have an old industrial table that I have refurbished as a desk and some Vitra chairs from Maarten van Severen. And hopefully I will soon have a new desk lamp! 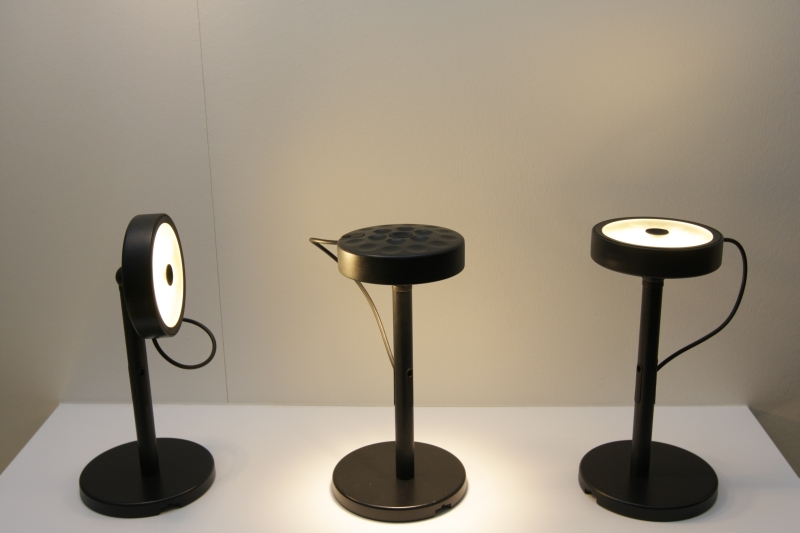 U-Turn by Michel Charlot for Belux. One lamp. A world of possibilities 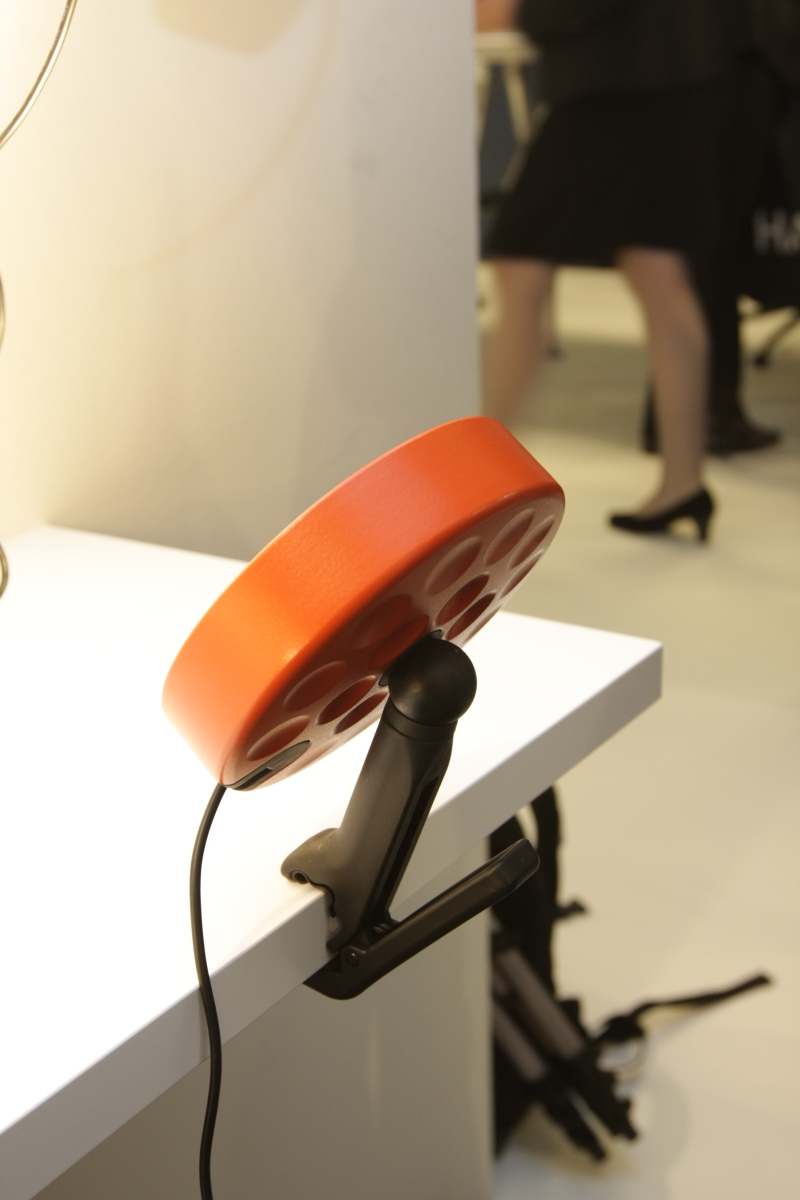 The clip version of U-Turn by Michel Charlot for Belux 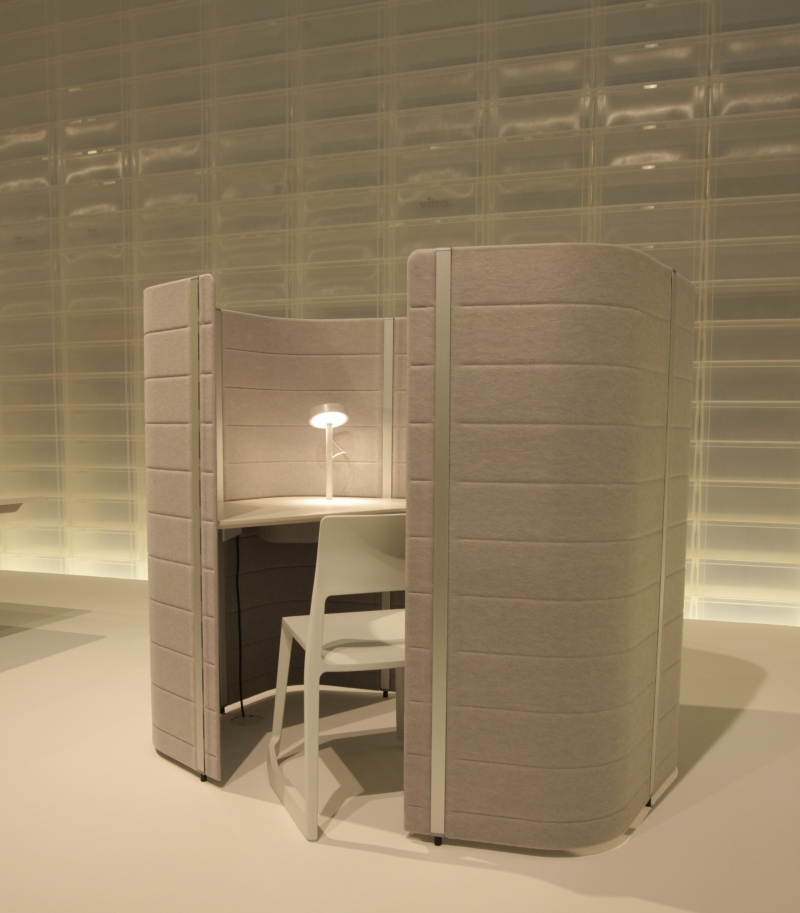 U-Turn by Michel Charlot in action in a Vitra Workbay