Its just the way we rock. Sorry…….

As we’ve noted before Halle should be Vienna. It’s certainly a much more attractive, imposing and interesting city than its near neighbour, and current global media darling, Leipzig.
But Halle is covered by layers of dirt and dust. Untouched, untroubled even, by the investment and hope of German unification. And so is easily, and regularly, ignored.

The one exception is Burg Giebichenstein College, an institution which over the years has cleaned up, renewed, refreshed, dusted itself down and which today is one of the genuinely more interesting design schools in Germany.

As is expected at Burg Giebichenstein the product and industrial design presentations largely concentrated on the results of numerous seminars from the past year, and largely presented “products” in comparison to the much more theoretical and conceptual works seen, for example, at the two Berlin schools.

Bamboo has long been a popular material for designers. Back in the 1940s Charlotte Perriand famously attempted to utilise bamboo to help invigorate the Japanese design industry, while today bamboo with its inherent strength and ease of cultivation is a popular research material for designers looking for new ways to furnish our world. For his final year project thesis Toshiki Yabushita looked at a different aspect of bamboo; namely using bamboo charcoal to absorb odours. That active charcoal can be used to neutralise odours is not new; however, with bamboo charcoal one has, as Toshiki Yabushita’s project charmingly depicts, a readily accessible, sustainable source of charcoal that can be easily added to other materials to create environmentally friendly odour eliminating objects. Among the products on display at the Burg Giebichenstein showcase were, for example, a bin lid and items of clothing with integrated bamboo charcoal. All in all a very nice project and one which offers a lot of room for further development. 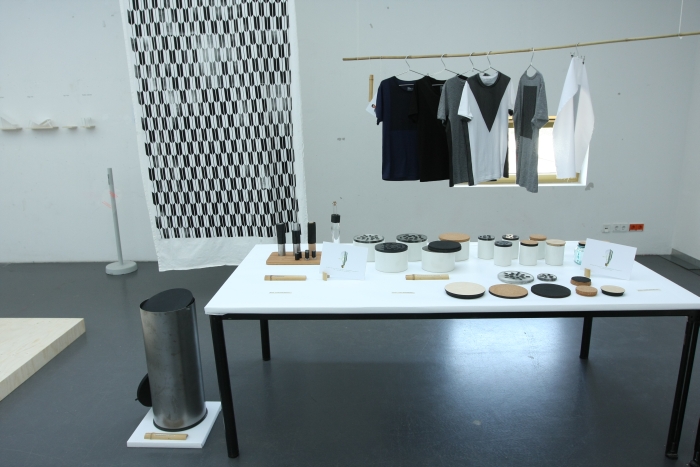 Carry Me by Miriam Bunte

We must have visited the room in which Carry Me by Miriam Bunte was being displayed at least 500 times before ultimately deciding that we really did like it. Initially we thought: just carry your bike! Grab it by the frame and carry it! But that is often easier said than done, or perhaps better put involves more time and effort than the situation requires. Often you just need to quickly negotiate a small step or other irksome hurdle. The simple genius of Carry Me is that it allows anybody to pick up and carry their bike with just one hand. Quick. Painless. Efficient. And presented as it is as a nice leather band it is a feature that adds value to the contemporary bicycle. 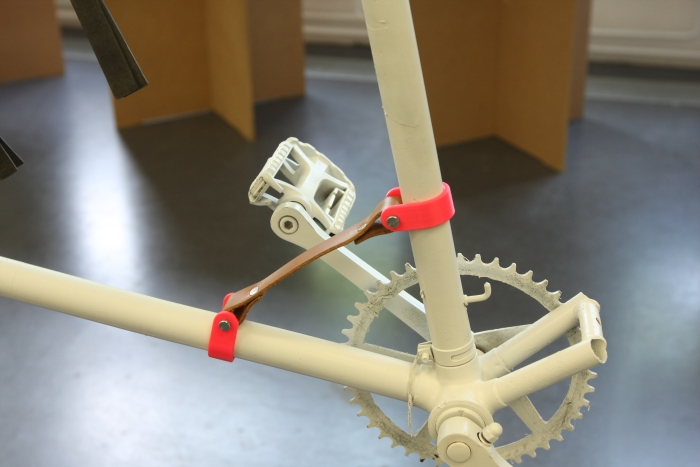 As with Carry Me we spent a lot of time trying to decide if we liked Alexander Köppel’s otherwise unnamed hallway storage unit. Before deciding we did. Our biggest problem with the unit is that it is, in our opinion, too deep, takes up more space than most modern flats and houses can afford. We know why its as deep as it is, understand why it is as deep as it is, just feel it needs to be less deep. And modular. Every owner of such a unit will have different requirements, as such to be a truly useful, interesting and dare we add, successful product it needs to be more modular. Which yes all sounds as if we didn’t and don’t like it. But we do. Very much.

Sadly there are obviously still elements within Burg Giebichenstein who believe that the world is full of evil forces just waiting to steal any design that crosses their path. And so banned photography in the showcase of works from the class Lichtkörper – Objekts mit Light.

Sadly, for two of the projects on display were genuinely fantastic and worthy of a wider audience.
Which they are sadly now denied.

Yes we could describe what they were, of what materials they were made, how they functioned, what the advantages and disadvantages were and present detailed sketches of them. Or we could have taken a photo and expressed our delight at the creativity that led to such results.

Those who steal and copy design steal and copy those ideas with which they can make a profit. Which in the world of product design is, as a general rule, objects for which there is an existing market. There, for example, weren’t any copies of Wilhelm Wagenfeld’s Bauhaus Lamp before Tecnolumen produced it. Now there are thousands. If not millions.

The plagiarists aren’t interested in the quality of the design. Just the insatiable market of customers who have no interest in the quality of the objects they buy, but who simply want to furnish their homes with objects they recognise and associate with possessing a certain quality. A quality they’re not prepared to pay for because its all about the image. Cultural semantics if you will.

I own a Bauhaus lamp therefore I am.

New concepts aren’t interesting because no thief is going to invest money in building up a market for such. Especially not the money required to develop a vaguely functioning student project into a market ready product that, ultimately, may not sell.

That would be stupid. And plagiarists aren’t stupid. Just immoral.

There are however an awful lot of hard-working, honest furniture and lighting manufacturers out there looking for new impetus, new ideas, new talent with whom to co-operate. With whom to develop new projects, markets and genres.

And such people far out number the crooks. 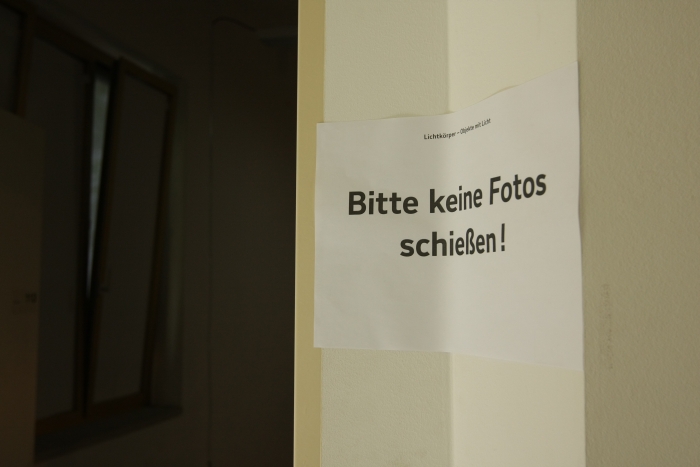