Rudolf Horn at the Grassi Museum for Applied Arts Leipzig

As we noted in our post from the recent Burg Giebichenstein Halle summer exhibition, the institution is currently one of the more interesting design schools in Germany.

That it is is largely on account of the conscientious work done and reputation established during the days of divided Germany, and the way that work has subsequently been carried on through into the unified days.

One of the most interesting, if not influential, members of the Burg Giebichenstein staff during the DDR days was Rudolf Horn, a man who joined the Burg Giebichenstein’s Institute for Furniture and Construction Design in 1966 and who remained at Burg until 1996, a man who, almost single-handedly, furnished East Germany, and a man whose contribution to the story of German design is currently being presented in a very brief, if informative, showcase in the Grassi Museum for Applied Arts Leipzig.

The MDW modular furniture system for VEB Deutsche Werkstätten Hellerau by Rudolf Horn, as seen at the Grassi Museum for Applied Arts Leipzig

Born in Waldheim, Sachsen in 1929 Rudolf Horn trained first as a carpenter and subsequently as an interior designer before taking up a position with the furniture manufacturer VEB Möbelwerke Heidenau. In 1952 Horn moved on to the East German Ministry for Light Industry where he remained until joining the so-called Büro für Entwicklung, Messen und Werbung in der Möbelindustrie in 1958. Parallel to his jobs Rudolf Horn studied part-time at the Ingenieurschule für Holztechnik Dresden – Dresden Technical College for Wood Technology – graduating in 1962. In 1964 Rudolf Horn’s first series of modular furniture, the so-called “Leipzig IV” collection was released, followed in 1965 by an accompanying collection of chairs, tables and associated pieces. Rudolf Horn’s real breakthrough however came in 1967 when the VEB Deutsche Werkstätten Hellerau released his MDW modular furniture system: a system that was to be produced for the next 24 years and which, as far as we can ascertain, graced every single living room in East Germany. We certainly don’t know many East Germans who aren’t familiar with the MDW system. In later years Rudolf Horn developed further furniture designs that were also to become standard in homes and offices across the DDR, including the Temaset modular office furniture system, a variable sofa system and a family of polyurethane wall mounted modules.

In addition to his furniture design work Rudolf Horn was also involved in numerous housing projects, most notably helping develop and construct a series of concepts high rise flat in Berlin, Rostock and Dresden. Utilising modular construction principles the pilot projects enabled the inhabitants to create, and alter, the internal layout of their flats to meet their, invariably changing, requirements.

For Rudolf Horn the fascination with modular systems came from a simple conviction, namely that “consumers must be able to decide. No-one should tell them what they need and what to buy!”

As if seeking to demonstrate the validity of this position, Rudolf Horn developed a habit of visiting customers to see for himself how they were using their MDW system. And regularly discovered situations where customers had cut the boards or otherwise manipulated and adapted the pre-fabricated elements: something that was very much to his liking “that is exactly how such a systems should be used”, he says smiling broadly, “everyone should have exactly that what they want!” An attitude to furniture that far from making him the “Father of IKEA” as the eastern German media refer to him, makes Rudolf Horn for us clearly the “Father of Open Design”.

In addition to this desire to give customers the opportunity to have the furniture and furnishings most appropriate for them, Rudolf Horn was also motivated by the nature of the job in hand.

Post-War East Germany, as with the rest of post-War Europe, had chronic problems in terms of accommodation and furnishings. And a similarly huge problem of alleviating the situation. Decisions had to be made.

“The central question was where are we going, how should this new, post-war, society be organised”, so Horn, “the society we had known before the war, and the one our parents knew was, and with all respect, not that what we wanted. Everything was broken and simply to re-create what had been wasn’t the answer”

Consequently, the remit for Rudolf Horn and his contemporaries was to look for a moment in history where similar conditions had prevailed, to see how the designers and architcets then had reacted, and so see what the new generation could learn.

Their search lead them to Bauhaus, European modernism and formalism in general. A movement that in many ways arose in situations similar to those being experienced in 1950s East Germany. Yet one which through the pre-war Nazi activities and subsequent war years had largely been closed to Rudolf Horn and his contemporaries.

Dumb however that the young designers had discovered formalism at just that period in history when the East German government were busy banning formalism. The so-called Formalism Debate of the early 1950s denouncing everything associated with the classic modern or the inter-war avant garde as “alienated and hostile” if not a “weapon of imperialism”. As we noted in our previous Design Calendar post on the exhibition “Models for industrial design” from the Hochschule für Bildende Künste Dresden, the East German authorities decreed in 1951 that “Formal tendencies are especially strong in architecture and they ignore the real needs of the workers”

But how did a young designer such as Rudolf Horn respond to such debates, to the accusation that his work was ignoring the workers real needs, could one take the authorities seriously?

“Of course we took them seriously”, he responds, “It was all about the workers, the new class, who were now in power, it was about creating something new for the workers so that they realised that they are important. And that was to be demonstrated with richly decorated furnishings, not with simple boxes. And that wasn’t an argument we could ignore out of hand” 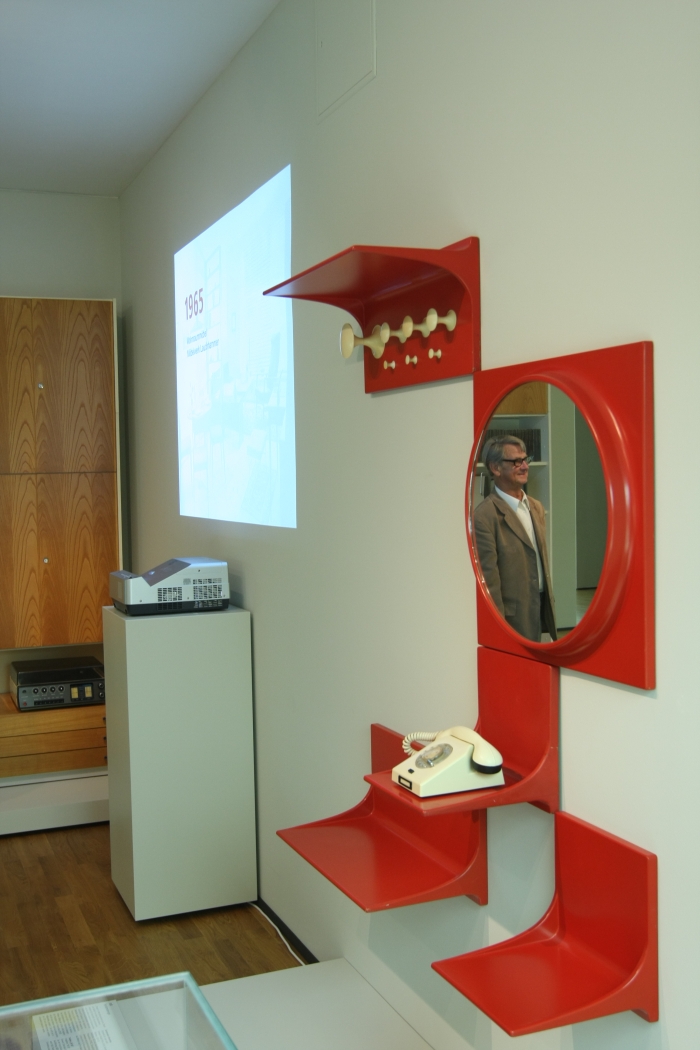 Synthetic modular wall units by, and with, Rudolf Horn, as seen at the Grassi Museum for Applied Arts Leipzig

Government wishes however are famously one thing. Reality another.

And so while the political leadership of the day was advocating solid wood furniture, the East German industry was busying itself with the question of “How?”

Quite aside from the lack of materials, machines and factories was the sheer volume of furniture that was needed to be produced. And that as quickly and efficiently as possible.

Fortunately for the East German furniture industry designers such as Rudolf Horn and his contemporaries – unquestionably motivated by the numerous designers and architects with Bauhaus links still working and teaching in the DDR, including, for example, Friedrich Engemann, Selman Selmanagic or Walter Funkat – were quietly ignoring the wishes of the authorities.

“Once we understood what we wanted and had freed ourselves from the arguments in favour of the historical standards, we simply set to work” explains Horn, “And then came the industry. And they wanted what we were doing.”

And through good contact in the government the industry got just that. And slowly, very slowly, the evils of formalism were forgotten.

Which of course raises the obvious question, why were the likes of Rudolf Horn allowed to work on such projects? Why did no-one intervene to stop them?

The answer is a simple as it is obvious “We were young, no one knew us.”

Many still don’t. The systems Horn and his colleagues developed being marketed and sold in the DDR without a designer’s name. The MDW system may be widely recognized. Rudolf Horn isn’t. The presentation at the Grassi Museum intends to change that.

For a designer of Rudolf Horn’s stature and importance the presentation in the Grassi Museum is far too small, provides an introduction to the man and his oeuvre but little more. And that’s a shame.

If only there was another museum somewhere in whose storerooms the archive of the Hellerau Werkstätten slumbered and who could put on a more detailed exploration…… If only.

That the presentation is taking place in the Grassi Museum however is very apposite, for here began the story of one of Rudolf Horn’s more interesting projects, the somewhat unfortunately named Conferstar lounge chair.  A lounge chair that bears a remarkable resemblance to Mies van der Rohe’s Barcelona Chair.

But then it’s supposed to. That however is a subject for another post…….

The Rudolf Horn presentation can be viewed until December 31st 2014 in the Grassi Museum for Applied Arts Leipzig permanent exhibition, “Art Nouveau to Present” 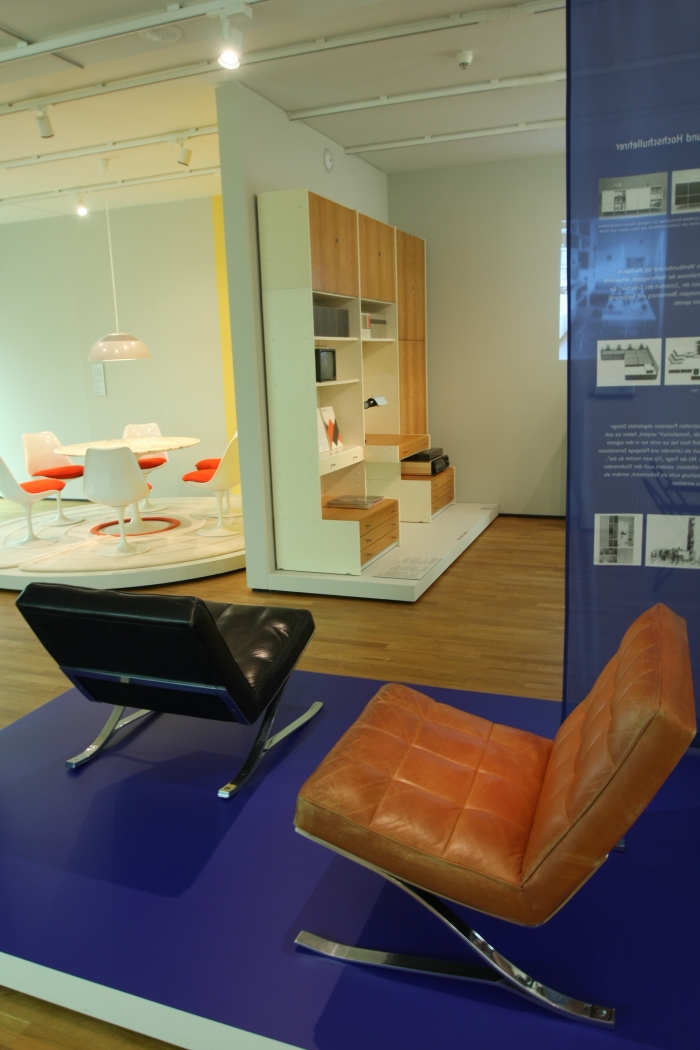 The Conferstar Lounge Chair for Röhl by Rudolf Horn, as seen at the Grassi Museum for Applied Arts Leipzig. Yes we know. But wait, there is a reason.......