Before Fritz Haller achieved international recognition for the USM modular furniture system, he was…….. a steel construction system! 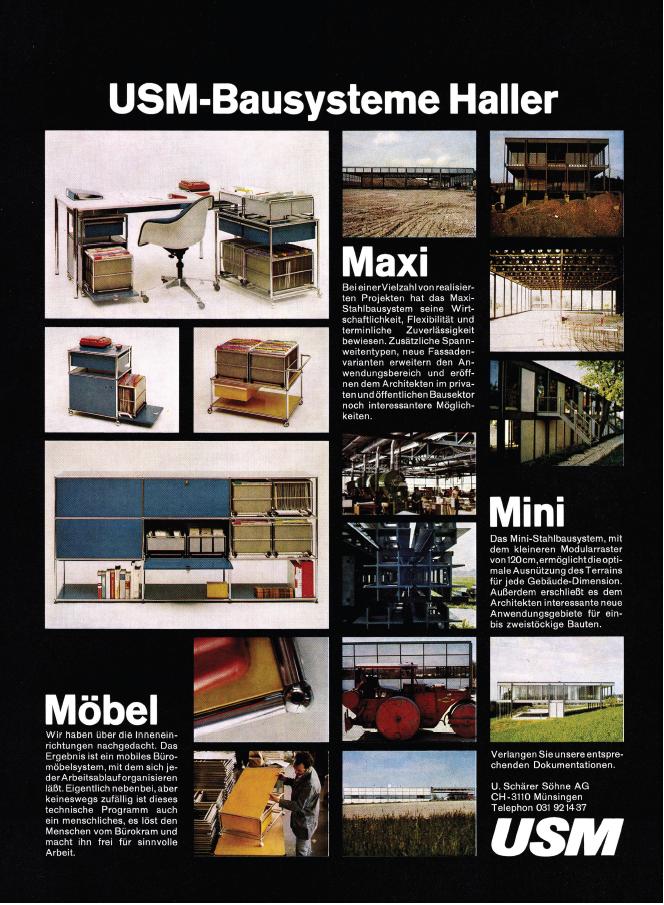 USM Construction System Haller, as represented in a USM advert from 1971

Born in Solothurn, Switzerland on October 23rd 1924, the young Fritz Haller trained as a draughtsman before gaining architectural experience in the offices of various Swiss architects. In 1948 Fritz Haller travelled to Rotterdam where he spent a year working in the office of the Dutch functionalist architects Willem van Tijen and Huig Maaskant: a year during which Haller became fully aware of just how much post-war construction and reconstruction work was required, and of the, for him, inescapable fact that conventional construction techniques and practices were simply not up to the task in hand and that new approaches were required. Upon his return to Solothurn in 1949 Fritz Haller established a joint architectural office with is father Bruno and in 1951 the Hallers won their first competition, for the Wasengenring primary school in Basel; a project that was to be the first of many schools and public buildings realised by Fritz Haller, and a project which introduces many of the themes and approaches which underscore Fritz Haller’s oeuvre.

Always as much an architectural theoretician as a builder per se Fritz Haller spent five years in the 1960s as guest professor at Konrad Wachsmann’s Institute for Bauforschung at the University of Southern California in Watts, Los Angeles where he researched systematic construction principles. A central facet of Haller’s research being how to best integrate water, electricity and similar technical services into buildings in such a manner that should the building need to be extended or reduced the services could be adapted with a minimum of fuss, disruption and cost; research that ultimately led him to develop ARMILLA, a spatial orientation and software system intended to aid the planning of technical service integration in modular buildings. In later years Haller published the books “Integral urban: a model” and “Integral urban: a global model” in which he transferred his ideas on systems and systems thinking from buildings to the built environment and urban planning. Fritz Haller died on October 15th 2012 in his native Solothurn.

The most famous representation of Fritz Haller’s system thinking is without question the USM modular furniture system.

The most important representation of Fritz Haller’s system thinking is without question his MINI MIDI MAXI construction systems.

Fritz Haller and a 1:1 scale model of a MIDI construction system as realised with ARMILLA, as seen at “Fritz Haller. Architect and Researcher”, the Swiss Architecture Museum Basel

Originally developed in the early 1960s the MINI MIDI MAXI systems are modular construction systems based around a simple interlocking principle. Essentially MINI MIDI MAXI features steel beams so designed that, and as with any number of children’s construction systems, they can be simply slotted into one another to create any number of vertical or horizontal construction components and thus allow for variable, flexible, modular structures. The modularity of the MINI MIDI MAXI systems meaning not only that buildings can be extended or reduced as required but also allowing for the, relatively, effortless addition, removal or reorganisation of doors, windows and façades.

The difference in the systems being in terms of scale and the type of constructions which can be realised: The MAXI system being intended for large single storey facilities, principally factories, the best example being the very first MAXI construction – the USM factory in Münsingen, Switzerland; the MIDI system allows the construction of multi-floored buildings with a high level of technical service integration, such as, for example, office buildings or schools; the MINI system allowing for compact one or two storey buildings and thus being most commonly applied for houses, but which has also found use in office pavilions and a bus stop.

The USM Haller furniture system can thus naturally be considered as a further reduction, and functional development, of the MINI MIDI MAXI systems. 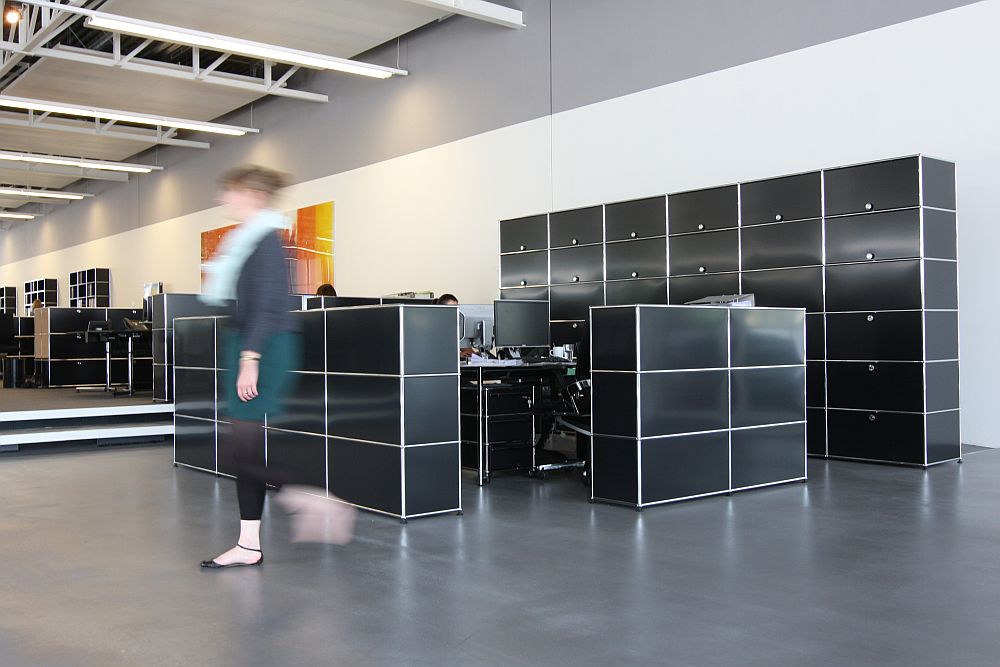 From 1963 onwards USM marketed the MINI MIDI MAXI system as the USM Stahlbausystem Haller – the USM Steel Construction System Haller, and that with a certain degree of success. In addition to Haller’s own works the systems were also employed by other architects: René Gassmann, for example, created a furniture store in Bevaix, Switzerland using the MINI system; Max Schlup used the same system to build a single storey house, idyllically sited overlooking Lake Biel, Switzerland; while Jartschitsch & Cie used the MAXI system to build a printing works in Saalfelden, Austria.

Marketing the USM Steel Construction System Haller in the 1960s and 70s USM noted that the systems offer the “flexibility to expand, reconfigure and to develop in stages”, and that on account of the “ingenious configuration possibilities, high technical standards and well considered proportions” one could achieve “new aesthetic qualities, without need for excess material or expensive additions.” Anyone interested in learning more was encouraged to “experience for yourself – ideally by viewing realized objects – the performance, flexibility and for all the cost effectiveness of this system”

And a modular steel construction system.