It is therefore very fitting that 2016 also sees the city host a retrospective of the English designer Jasper Morrison.

Born in London in 1959 Jasper Morrison initially studied Design at Kingston Polytechnic before completing a Masters degree at the Royal College of Art, London, a course of studies which included a stipendium year at the Hochschule der Künste, HdK, in Berlin.

Jasper Morrison’s decision to follow a career in design, and for all furniture design, goes back however to mid-1970s London and an occasion which on first impressions makes little sense, but on closer consideration is very logical: an exhibition of works by Eileen Gray

“At that time I felt I wanted to do something in the direction of architecture or design, all very vague”, explains Jasper Morrison the thinking of his teenage self, “and when I saw the Eileen Gray exhibition it was a kind of revelation in that I understood what she was doing, I could speak the language, and was so impressed by her work that I decided on a career in furniture design”

And was it the simplicity which so attracted him or the scale, the clarity?

“I think it was the structural arrangements, I could figure them out, knew why she was doing it, appreciated the lines and it all just made perfect sense to me”

That Jasper Morrison saw an Eileen Gray exhibition could be considered an indication of fate’s fickle hand. Until the early 1970s Eileen Gray was one of the great forgotten 20th century designers, only following a 1972 auction of some of her works in Paris was attention in and interest for her works revived, thus motivating a few institutions to present Eileen Gray exhibitions.

In 1982 Fate’s hand intervened again. This time in Milan.

“At that time I had an Italian girlfriend and she knew Bepi Maggiori, an Italian journalist writing for Casa Vogue. During the Milan fair I was at an event one evening in Luna Park, was standing with a group of people and asked if anyone knew where I could find Bepi Maggiori. “That’s me” answered the man standing opposite me.”

At the time Bepi Maggiori was in the processes of co-organising a meeting of European designers, a meeting called “Rastlos, Design on the Border” and to be staged at a roadside restaurant called Rastlos, near the Austrian town of Eisenstadt, close to the Hungarian border.

“In those days I used to carry a Kodak slide box around with me, with slides of my work,” continues Morrison,” I showed Bepi them and he invited me to participate in Rastlos. There were a few cars going from Milan and so I jumped into one, with no physical products, just the slides. There was a feeling of great adventure about the event, there were designers from all over Europe there and that allowed me to start to build a network of contacts throughout Europe.”

Among those who attended were Piero Castiglioni, Stefano Giovannoni, Studio Alchimia and perhaps most importantly Andreas Brandolini, who would later provide the impetus for Morrison’s year in Berlin and with whom Jasper Morrison would go on to develop numerous projects. And the concept of Uselessnism – design for design’s sake rather than any sense, purpose or use.

The question as to just how important the Rastlos meeting was for the future development of the then student Morrison’s career is greeted, somewhat unmorrisonly, with an emphatic response, “Very important. That was my European break! I think if I had stayed in London, and had not had that chance, it would have been a lot more difficult”

London did however prove to be the location of Jasper Morrison’s first commercial success.

Among Jasper Morrison’s first clients were the London based furniture producer SCP and the retailer/gallery Aram: the former being the first to produce and distribute Morrison’s designs, starting with the Slatted Stool in 1983; the latter, aside from providing a nice link back to Eileen Gray – Aram hold the global licenses to all Gray’s work and Zeev Aram was a personal friend of the designer – also displayed and sold the original handmade versions of Morrison’s Thinking Man’s Chair, before Cappellini took up the manufacturing and distribution of the work. The rest, as they say, is history.

And the exhibition Thingness.

Originally presented in 2015 at the Centre d’innovation et de design, CID, Grand-Hornu, Belgium as part of the Mons European Capital of Culture programme, Thingness is arranged chronologically and provides an easily accessible stroll through thirty years of Jasper Morrison design, or at least 30 years of commercially realised Jasper Morrison design. There are, somewhat regrettably, no concepts or discontinued prototypes on display; somewhat regrettably because all creatives are the sum of their successes and the dead ends down which they have naively ambled. Not just the successes. Starting with his ever magnificent Handlebar Table from 1981, a work produced by Morrison himself in an edition of ten, Thingness moves sprightly over objects such as the Plywood Chair for Vitra, Low Pad Chair for Cappellini, Air Chair for Magis or December Chair for Nikari. And so yes, it is mainly chairs. Mainly, but not exclusively, projects such as the Rotary Tray for Vitra, Glo-Ball for Flos, Knife Fork Spoon for Alessi or Scamp Bag for Maharam are also given their place.

The exhibition design is less items on white pedestals as items on raised wooden platforms, a reduced exhibition design concept which is more than eloquently filled by the short texts on the works, short essays on design by Morrison, simple sketches and photos which place the work in context. Written by Morrison the texts allow not only one to understand from where the objects originate, but thanks to Morrison’s light and uncluttered writing style to get closer to the designer Jasper Morrison. A more professional design journalist would no doubt comment at this point that Morrison’s written language is as clear and ornamentation free as his design language.

The nature of the exhibition display, and the fact that some of the texts are taken directly from Morrison’s website, does occasionally give the exhibition the feel of viewing an offline version of Morrison’s online presence, his permanent online retrospective if you will. However as with Okolo Offline at Depot Basel, that is exactly the strength of the exhibition: only through physically observing, comparing and considering design works can we understand them. Product design is physical and can only be truly experienced physically.

In addition to the retrospective of Morrison’s works Thingness also includes a section titled MyCollection which presents 63 objects selected by Jasper Morrison from the Museum für Gestaltung’s collection, each accompanied by a short text by Morrison explaining what appeals to him about the individual works: a short text written in the same direct, uncomplicated language as the Thingness texts. Featuring a mix of furniture, product and graphic design MyCollection presents works by Swiss and international designers such as, for example, Ueli Berger, Jürg Bally Hans Coray or Rex Kralj, and numerous works simply accredited to “anonymous”. An intelligently conceived and well realised showcase, MyCollection is an excellent addition to Thingness as it allows the visitor to get a few steps closer to the designer Jasper Morrison that would have been the case with Thingness alone. And negates part of the disappointment at the lack of concepts and unrealised prototypes.

The exhibition title plays very nicely on the concept of “The Thing”, a concept and term which has accompanied Jasper Morrison through the majority of his career; as Thingness however clearly shows the one “thing” missing from Morrison’s work is any reference to or indication of “Internet of Things”; Jasper Morrison’s work remains resolutely analogue in terms of materials, form and functions, and offers little connection to a digital age, far less a connection to a digital highway of endless possibilities. “I guess I’m just an analogue guy” responds Morrison to our query, a statement we’re sure no one would or could disagree with. This analogue state is however far from an expression of a Luddite tendency much more a reflection on Morrison’s understanding of design, and of his responsibilities “as a designer you want your designs to look good and function forever, not just for two or three years”

And viewing Thingness is he convinced that is the case?

“There are few wobbles along the way, but on the whole I think so yes” 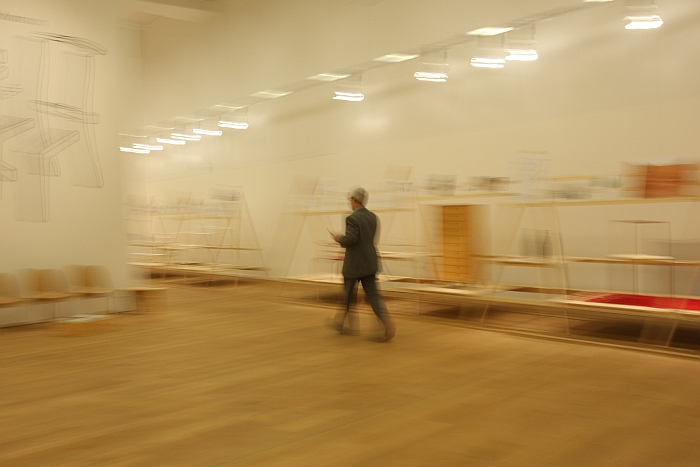 Having started out being inspired by a functionalist such as Eileen Gray before Memphis and the 1980s post-modernists caught his imagination, Jasper Morrison quickly developed a more rational approach, taking the directness of the 1980s and combining it with the reduction of the 1920s and 30s to realise an approach to design which is very much his own. A post-industrial less is more which focuses on the essence of the object and thus endues the works with an accessibility and everyday realism that all too often is missing from some of the more dogmatic examples of both modernist and post-modernist design. But where does Jasper Morrison see the relationship between form and function. Is there one or…….?

“I never bother that much about it”, replies Morrison, “you need to have form and you need to have function but they are interwoven with other things which are just as important, such as material, comfort, economy, durability”

So, we venture, with his work it is more about the development of an idea, or even an ideal, rather than a product per se?

Or put another way if you put the Thinking Man’s Chair next to the Plywood Chair in a room of Jasper Morrison’s designs you get a very good idea of the consistency, rationality and implicitness with which Jasper Morrison has developed his ideas on and understanding of design over the past three decades.

Anyone who has studied the work of Jasper Morrison to any sort of depth will find little new in Thingness, possibly however in MyCollection.

That only very few people have done such, and the majority consequently only know Jasper Morrison through one or the other commercially more successful works, all with a general interest in contemporary design will find a good deal new, surprising, thought provoking and entertaining in Thingness.

But for or all lots of logical structural arrangements, clear lines and an understandable language.

And then there was Dada…….

Quite aside from the connection between Duchamp’s readymades and many of Morrison’s early works including the Flower Pot Table, Laboratory Lamp and the aforementioned Handelbar Table, has Dada, we ask, played a role in Jasper Morrison’s life?

“Yes, yes very much so. While I was studying design at Kingston I had a small sideline as a second-hand book dealer and was particularly focussed on surrealism and Dada, as well as architecture and design, and so it was certainly an interest and an early influence”

Less is more, avant-garde and surreal!

In addition to the exhibition the museum have also organised a supporting fringe programme, full details can be found at www.museum-gestaltung.ch

A seat needn’t be a chair! Bonola by Jasper Morrison for Flaminia, as seen at Thingness, Museum für Gestaltung Zürich