Inaugurated in 2016 state of Design Berlin is a festival which seeks to explore the experimental, critical, social character of design as much as present the industrial and commercial: and by extrapolation explain not only that design is all these things, but that the various aspects of design’s character needn’t be contradictory, far less conflicting or contrary.

Initiated by the German designer Alexandra Klatt and Belgian design critic Max Borka, the inaugural state of Design Berlin was a sprawling, arguably, given the contemporary conditions, over ambitious, event staged at several venues across the German capital. Pleasingly, for 2017 the festival is concentrated in one venue, and not only has the staging been simplified and concentrated, also the programme: the second edition of state of Design Berlin being a much more streamlined event than its predecessor.

Streamlined. Not watered down.

For us one of the most interesting components of state of Design Berlin 2017 promises to be Now and then. How sustainable was my sustainability? As part of his Mapping the Design World project Max Borka published in 2012 a survey of 100 global social design projects. And in 2017 asked them how they were getting on. If they were getting on. Where they were at.

Nobody follows up. Everyone writes about a design project and then moves on to the next one. Everyone should go back. Follow up. Check up. Analyse why it developed as it did, and what can be learned from the experience. It is only logical. But nobody does. Max did.

Sadly not all 100 replied, but all those who did will be presented at state of Design Berlin 2017: the majority as simple text presentations, six however in a more detailed, then and now, context including The Idea of a Tree and Collective Works by Vienna based Mischer’Traxler, Sea Chair 001: Porthtowan by London based Studio Swine, and a presentation detailing the development of Olafur Eliasson’s Little Sun project, including the latest carnation, Little Sun Diamond. An almost world exclusive launch presentation: the formal one having taken place at Design Indaba in Cape Town in March, and Little Sun Diamond itself not being available until September.

The social design perspective of state of Design 2017 is complimented by the Berlin based project CUCULA Refugees Company for Crafts and Design, in which refugees construct and sell objects from Enzo Mari’s 1974 Autoprogettazione project, and Stück für Stück – Piece by Piece – a project by and with students from the Hochschule München under the guidance of Michael Geldmacher and Florian Petri, and which sought to develop furniture for Munich’s Bellevue di Monaco housing and cultural centre: furniture which not only responded to the architectural and practical realities, but also reflected and represented the refugees and their stories. In addition state of Design Berlin 2017 will feature a presentation of the Love School Project which saw students from the Universität der Künste, UdK, Berlin cooperate with pupils from the Love School in Nairobi, Kenya on the development of a range of products to be sold to raise funds for the school. And for all to allow the school to buy land and thus stop their continual, enforced, displacement as their existing site invariably becomes developed. 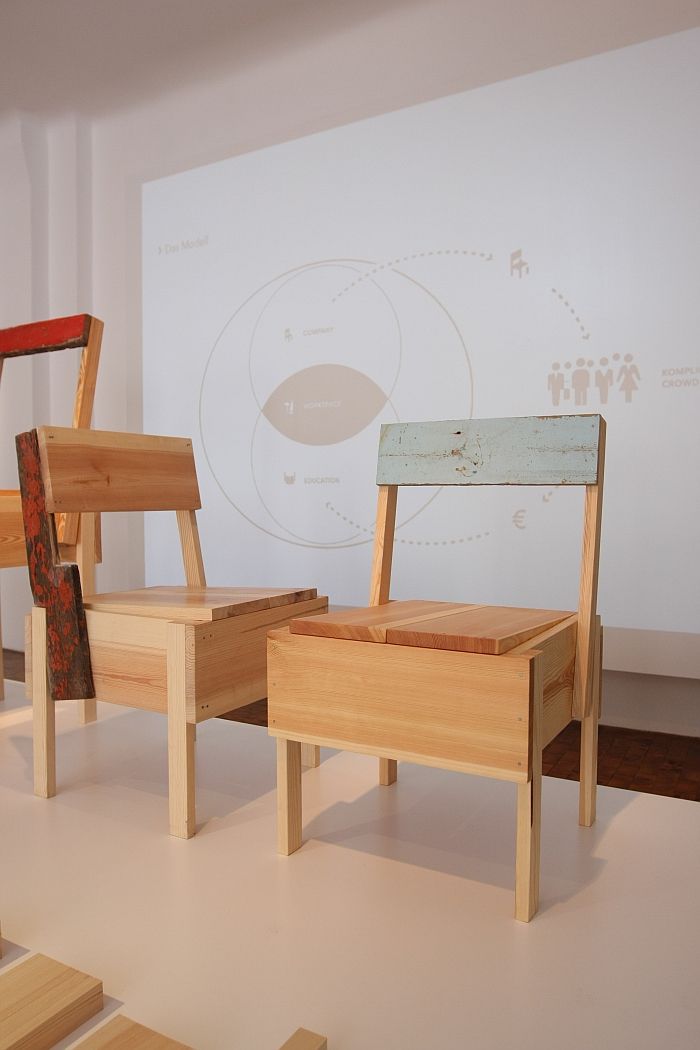 Wood from Lampedusa refugee boats, and its integration into furniture, as seen at CUCULA – Refugees Company for Crafts and Design at the Werkbundarchiv – Museum der Dinge Berlin (2015)

The spirit of sharing, exchange and cooperation is further reflected, albeit in a more cultural creative than social developmental context by the project Here and There. Instigated by Korean born, Berlin based, designer Bora Hong, Here and There seeks to promote a process of international cultural communication and thereby, and as they themselves phrase it, “reflect on contemporary culture and to explore the future of traditions.”

The first Here and There edition was staged in context of the 2016 Chiang Mai Design Week in Thailand, and resulted in 5 projects from Bora and four Dutch studios – Atelier NL, Lucas Maassen & Margriet Craens, Nanu Youttananukorn and Wandschappen. At state of Design Berlin Here and There will not only present a documentary of the Chiang Mai edition and an exhibition of the works realised, but also host two workshops which will take participants out of the festival space and into the city.

Staying with the spirit of cooperation, state of Design Berlin 2017 will also feature a presentation of and discussion around the project Design in the Middle. Initiated in context of a five day workshop hosted by the MAXXI Rome in March 2017, Design in The Middle aims to bring together designers, architects and activists with a middle eastern background to develop design proposals relevant for the contemporary, and the future, middle east; the first workshop exploring subjects such as nomadicity, religious diversity, digitalisation and food/water security, in Berlin the initiators will discuss the results from Rome and how they plan to develop the platform.

The Elephant Factory by Lucas Maassen & Margriet Craens, part of Here and There Editon 1

As a festival which is as much about furthering the dialogue and discourse around design, and by extrapolation society, as is about presenting projects, an important component of the state of Design 2017 concept is the series of films exploring the role cinema can play in design processes, and also the numerous talks, debates and discussions which aim to highlight, deepen and extend upon many of the themes inherent in state of Design.

The central platform for the talks, debates and discussions will be the so-called Folding Chair Arena, a construction of 500 folding chairs conceived and realised by students from the Inside interior architecture masters course at the Royal Academy of Art The Hague.

And an arena which itself is a component of state of Design Berlin: in context of the 2016/2017 academic theme Participate! the Inside students started exploring how, if, the design of space affects debate, discussion and decision making processes – an important consideration in a contemporary world of ever increasing participation and stakeholding, and where public debate will become an increasingly central component of democratic, and pseudo-democratic, processes. As part of this research, throughout the course of the festival the Inside students will run 6 separate Entscheidungslabor – Decision Making Laboratory – workshops in the Folding Chair Arena before presenting their results on Sunday afternoon. 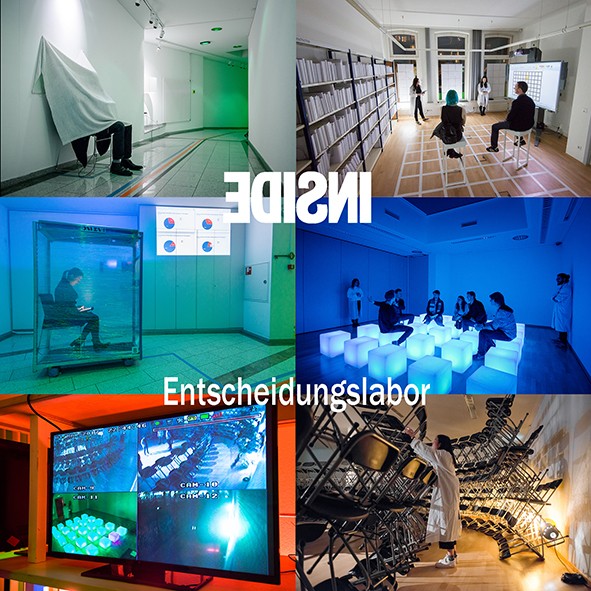 Does design of space affect decision making processes? And thus what we decide?

As one would expect, and we would hope, state of Design Berlin 2017 features the next edition of Nieuwe German Gestaltung, edition #006, an edition promising works by some 30 German designers and an edition presented under the title Alles Neu. A phrase one could translate, and which state of Design have translated, as Total Change: the title, and spirit, of Nieuwe Global Gestaltung #001. As the name implies Nieuwe Global Gestaltung is a new platform for international designers, and the inaugural edition features two foci: Flanders and the Baltic states.

Flanders is represented by Connecties, a presentation of projects by five artists selected and curated by the Leuven based designer Bram Kerkhofs and which sets his design in dialogue with the art: the Baltic states by At the intersection featuring product, textile and jewellery designers from Lithuania and Estonia, predominately recruited through the efforts of Brigitta Ziegler from the Stuttgart based Baltic Design Shop. And thus two very different platforms, and platforms which, when considered alongside the newly initiated state of Design shop which will allow visitors to not only view but purchase, underscore the mix of the cultural and the commercial which is at the heart of state of Design Berlin.

Or as Max Borka phrases it, “Design is multi-layered and it is the dialogue between these levels that makes design so interesting, and which also makes a design event interesting”

With the new, reduced, concentrated, streamlined concept, state of Design Berlin 2017 would appear to have a mix which allows just such an interesting dialogue.

The proof of the pudding is however never in the filtered Instagram, but always in the eating.

We’ll be sure to let yous know once we’ve tasted!

For all in or near Berlin state of Design Berlin runs at Vollgutlager – der Alten Kindl Brauerei, Rollbergstraße 26, 12053 Berlin from Thursday June 1st until Sunday June 4th

Full details, including the timings of talks, films and workshops, can be found at www.stateofdesign.berlin