In our recent interview with the Danish designer and author Thomas Dickson, he discussed the relevance of 1968 as a year of revolution in Danish design. Founded in 1967 Design School Kolding grew up against the background of that revolution.

An indication as to if that spirit lives on as the institution celebrates its 50th could be found at the 2017 Design School Kolding graduation exhibition. 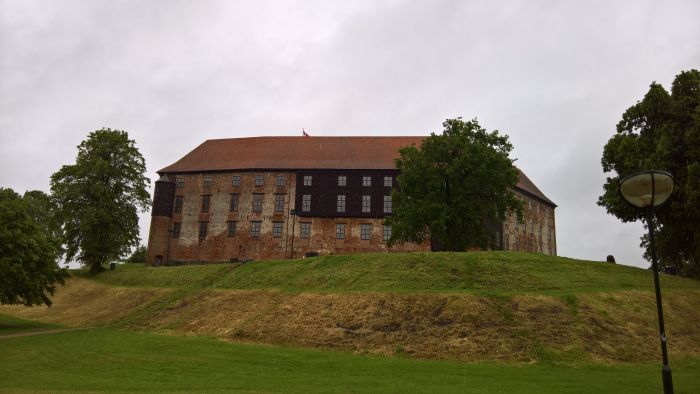 Established as a Kunsthåndværkerskolen, a school of applied crafts, under the auspices of Kolding Technical College, Design School Kolding originally had a focus on ceramics, textiles and advertising: and no, we don’t really understand the latter as fitting into the Kunsthåndværk concept. But are happy to accept it did.

Following three decades as part of the Technical College, Design School Kolding, finally, flew the family nest in 1996 and was formally established as an autonomous institution: the intervening years having seen Advertising become Visual Communication, and the new department of Industrial Design signalling a move away from the traditional craft origins to more contemporary crafts. A move further underscored by the closure of the ceramics department in 2007. Certified as a University in 2010, Design School Kolding currently offers Bachelor and Master studies programmes in Industrial Design, Communication Design, Accessory Design, Fashion & Textiles, and from autumn 2017 a new Masters in Design for Play, a programme of study realised in cooperation with LEGO.

And yes, we do really appreciate that way the word “fashion” isn’t followed by “design” 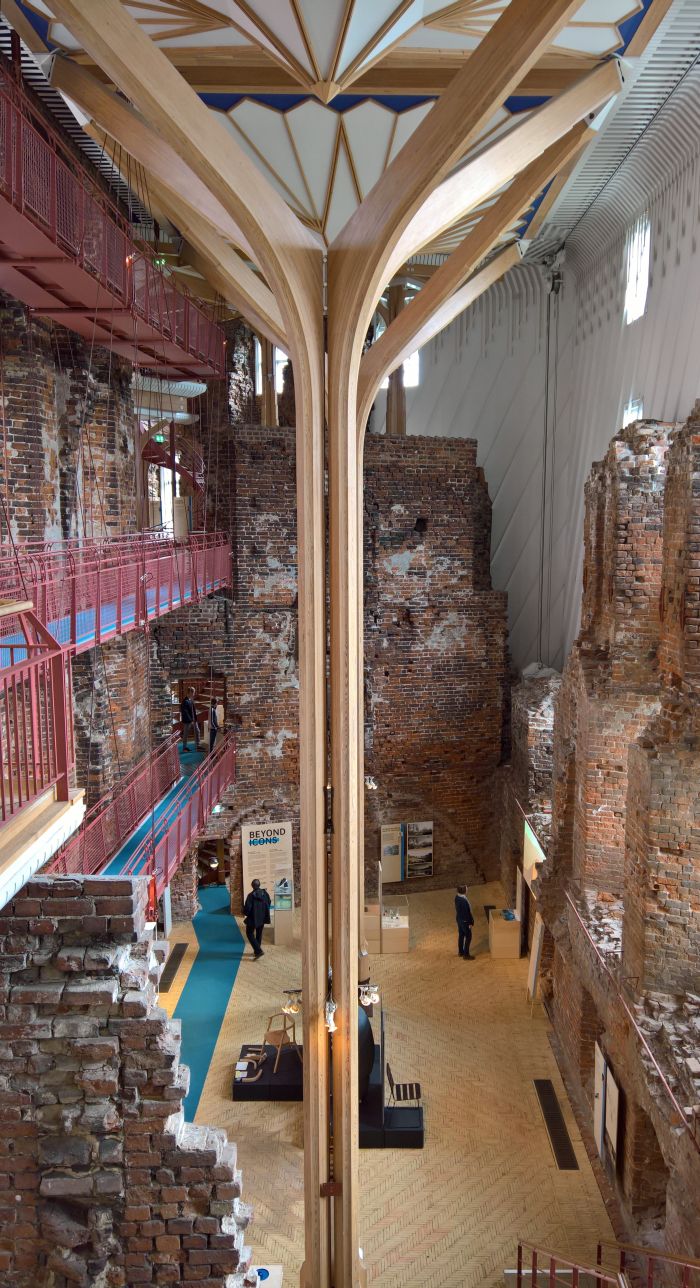 By way of celebrating their 50th anniversary Design School Kolding are staging a wide ranging design exhibition under the title Beyond Icons – of which more later – and have very pleasingly woven the 2017 Graduate exhibition through Beyond Icons. Pleasingly, not least, because the juxtapose of established design with the graduation projects allows for the consideration of the students’ projects in a much wider context than is normally the case with graduation exhibitions.

Staged in the medieval grandeur of the Ruin Hall at Koldinghus – the thirteenth century castle established to defend the fledgling customs and trading post – you are at first somewhat overwhelmed by the scale of the exhibition. Take your time however, walk around, get a feeling for things and very quickly you’ll get your bearings and realise the exhibition isn’t large, but expansive. The confusion arising from the scale, and grandeur, of the exhibition space.

Particularly pleasing is the nicely considered exhibition design: a carpet in the style of the blue Copenhagen bike path guiding you around and through, while the scenography effortlessly differentiates between graduation projects and Beyond Icons exhibits. And although all the project descriptions are in Danish, a comprehensive exhibition catalogue provides English translations: even if the order in which the projects are presented in the catalogue would appear to owe more to chaos of the 13th century than the logic of the 21st. There seemed for us neither rhyme nor reason in the chosen order. But, and as ever, that may just have been us……. 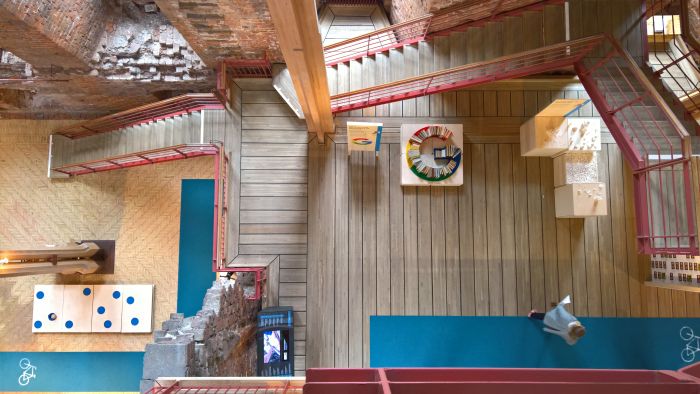 Presenting a mix of communication, textile and industrial design projects a couple of factors are quickly clear; firstly the number of social design projects, and for all those which appear to have been motivated by the influx of migrants and refugees to Denmark in recent years. Projects which, one would assume, tackle problems considered as being inadequately, or just not, solved by existing solutions and for which new approaches are/were urgently needed. And which thus represent a very nice demonstration of the fact that just as “scientific” universities are places of real time research, so to are design schools. Similarly, the success, or otherwise, of such projects can only be measured over time.

The second inescapable is that all the projects have been realised with a commercial or civil/NGO partner; as we noted in Lund, while that in itself is no bad thing, it is important that the nature of the relationship doesn’t unduly constrain the student. Amongst the commercial partners names which particularly stood out included, Carl Hansen & Søn, TON, Nomess Copenhagen and Skagerak, and for our part we’re looking forward to seeing to see how many of the projects, or at least the thinking inherent therein, evolve into commercial projects. Watch this space…… 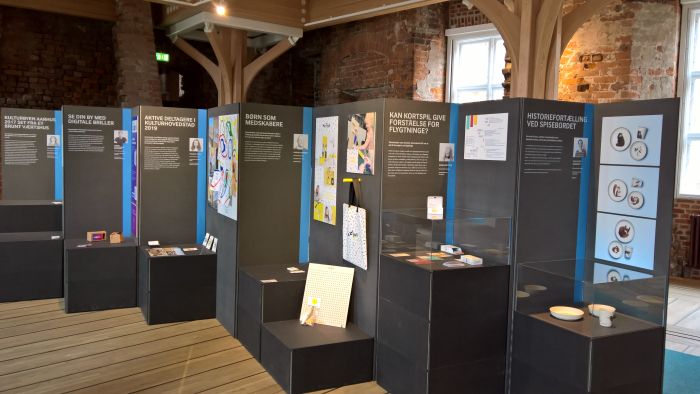 Among the projects a few naturally attracted our attention and focussed our thoughts more than others, whereby the decision to present them through descriptions rather than names does kinda complicate telling you which, but…….. The project “Chinese Chairs” by Zejun Yan seeks to bring what he refers to as “Nordic-style chairs” to China. Why you’d want to that is for us the key question, and one which becomes all the more tantalising when one considers the influence a “Chinese chair” had on a young Hans J. Wegner, and the relevance that has for “Nordic-style chairs.” However, regardless of such considerations the solution Zejun Yan developed was not un-interesting, if arguably more on account of the construction system than object per se.

With their Menstrual Cup project Iga Slowik and Paul Lequay seek to tackle not just the stigma of menstruation in context of homeless women, but also the practical problems, and while the practical success of the project can only be measured through application, there is/was something very pleasing about the way they approached the brief, and for all the way in which the project eloquently highlights that in “product design” the emphasis must always be on “design” not “product”; while with, what we’re calling, “Brown Pubs”, Maria Molbech appears to offer an alternative view on Aarhus’s tenure as European City of Culture 2017, if not a more general criticism of gentrification in the name of culture. But we’re not 100% sure. There wasn’t that much accompanying information. Our “field notes” from Kolding simply say of Brown Pubs, “don’t really understand, but sounds very interesting. Czech up” Which we fully intend to do. (And no “Czech” is not a spelling mistake, rather an idiosyncrasy) 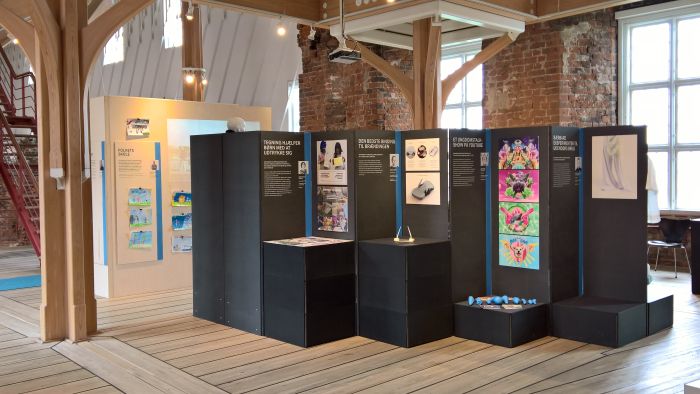 A popular theme at the moment is explorations of urban food production, and for all of increased domestic food production, whereby a great many systems rely on hydroponic solutions: solutions which for us are often too clinical, too far removed from the natural environment we have to understand if we are to stop destroying it. Or put another way, that which can be synthetically replaced is perceived as being of little value. For us the best, simplest, and by far most elegant solutions are natural, soil based systems. Systems which will invariably need fertilising. With her “Future Composting” concept Ghazaleh Akhavan offers a system that allows for simple and elegant domestic composting without the need for a garden. In short: food waste in the top, compost out the bottom. What’s not to like!

We don’t need Apps for everything. Surely as a species we’ve not, yet, lost the ability to achieve things without the assistance of our telephones. Surely? We fully appreciate Ghazaleh’s comments about “educating consumers about sustainability and food wastage”; however, if you’ve bought such a device, you understand, if you have one forced upon by the local authority, you’re never, ever, going to use it. The education needs to lead to the acquisition of such. Not ex post facto. The well designed, aesthetically pleasing, energy efficient, user friendly home composter owned by your more enlightened neighbour/sister/lover being the best way to spread the message. And, and although at a very, very early stage, Ghazaleh’s project appears to be moving in that direction. 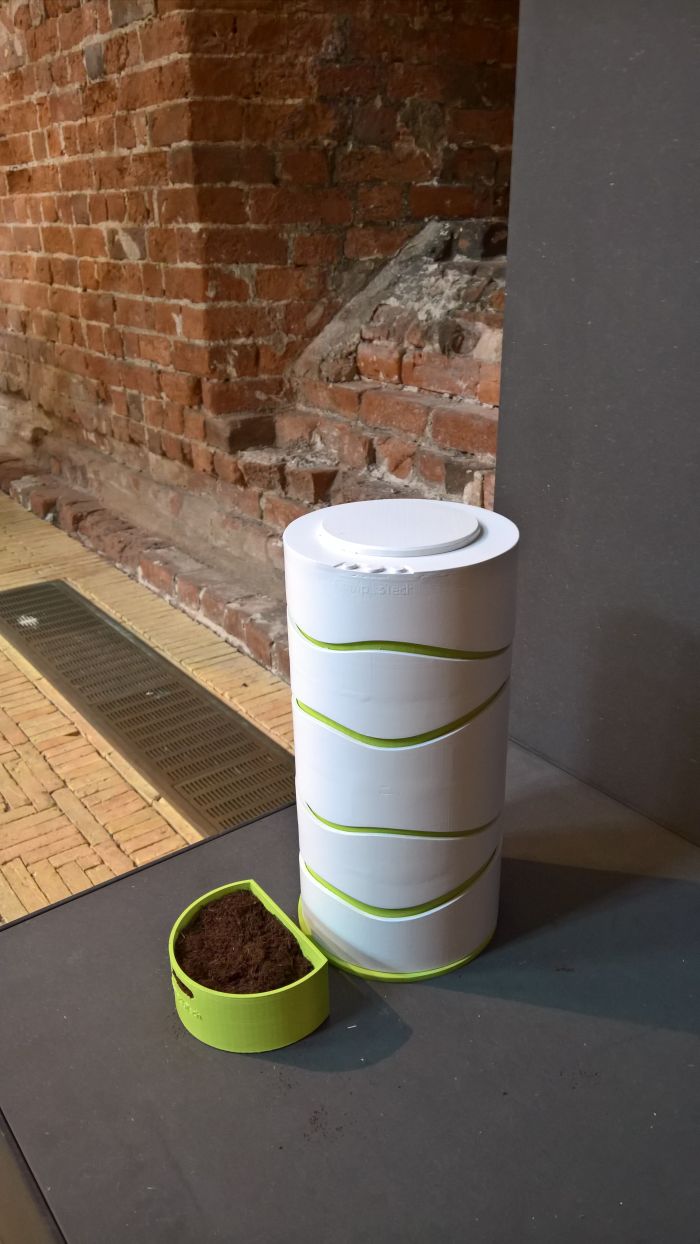 The Danish lighting company Le Klint was founded in 1943, principally as a platform for distributing the lighting designs of the Danish architect Peder Vilhelm Jensen-Klint. In addition to designs by various Klints, including Peder’s son Klaare, the current Le Klint portfolio also includes works by the likes of, and amongst many others, Harrit-Sørensen + Samson, Hvidt & Mølgaard and Øivind Slaatto.

In context of their graduation project Marie Hesseldahl and Nanna Neergaard went, in effect, back to the company’s origins, namely the architecture of Peder Vilhelm Jensen-Klint, and used the curve of the arches inside his Grundtvigskirken in Copenhagen as the formal basis for a collection of lamps. An excellent piece of context and location based design, and an equally excellent family of lamps, from which we’d have to say the floor and pendant version struck us as being the most complete. More competent design journalists would relate that to that fact that in both versions the arches in the lamp shades hang as confidently and naturally in space as those stone arches in the Grundtvigskirken. We liked the fact they were arches. The other versions transforming the arches into oblique rings, which got a bit too Art Deco for our sensibilities. But all in all a most endearing family of lamps. 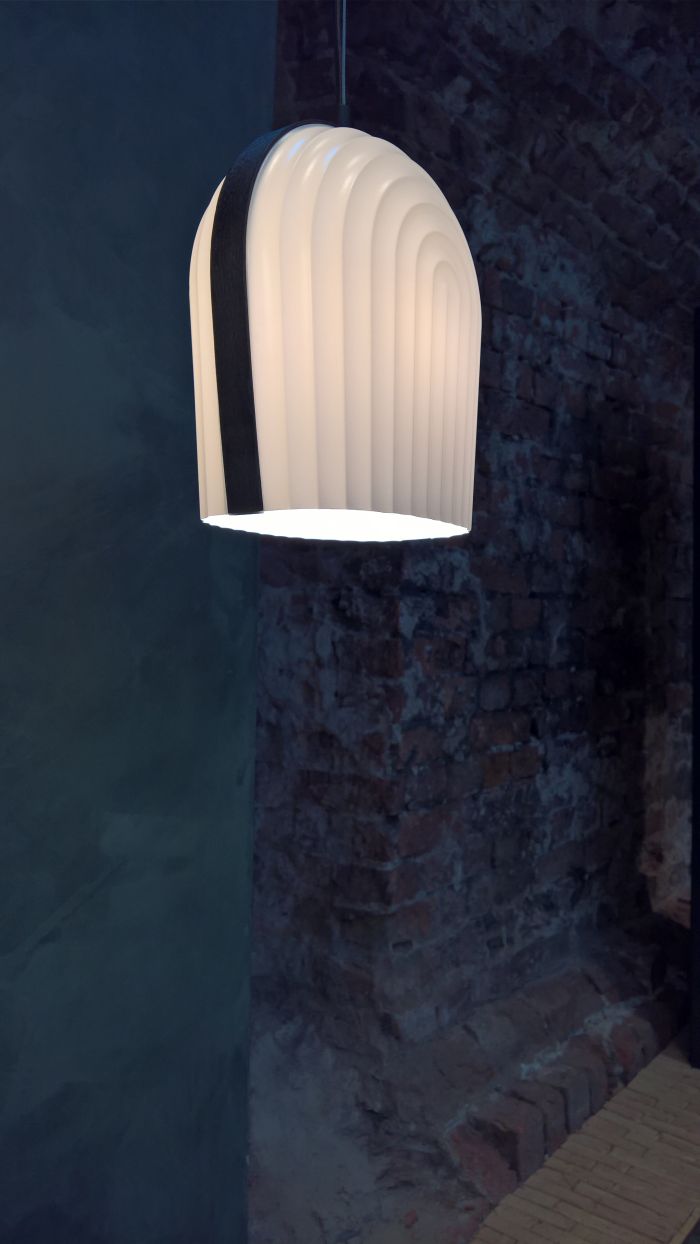 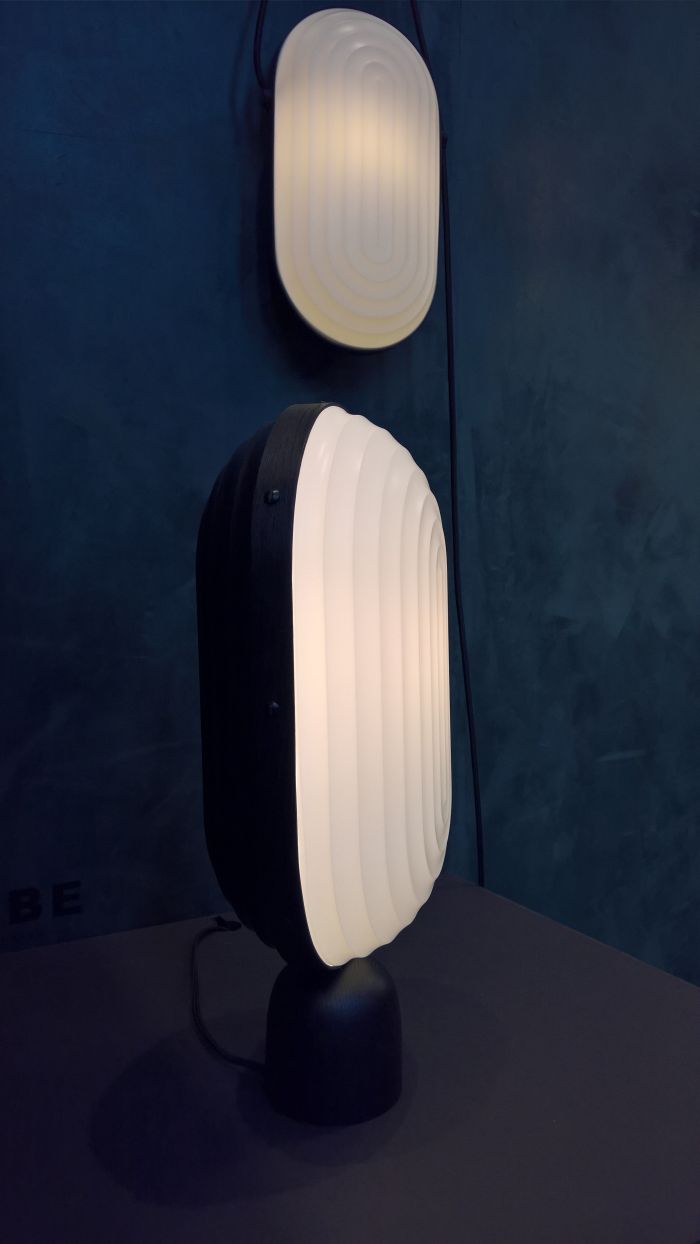 It would be very easy to class Giulia Pesce and Ruggero Bastita’s solution for shared living spaces in reception centres for refugees and the homeless as social design. Indeed the exhibition catalogue does. For us however the secret of the project lies in its universal applicability. For while as a system it arose from the problems specific in such extreme situations, the development process has clearly seen it move on to become a system whose dignity and reduction mean it is location unspecific.

It could work in a shared living space. Could also work in our hall. Or office.

Presenting a cupboard attached to a tripartite, hinged, screen, what is particularly pleasing is that the screen is at no point fully closed, rather remains open and thus implies privacy while both maintaining contact with the space and bequeathing the object a visual lightness. And that the three panels offer different functionalities. Functionalities which can be extended through simple accessories. Thus making it not only a universally applicable system, but an endlessly adaptable one.

The Design School Kolding Graduate Exhibition 2017 can be viewed, along with Beyond Icons, at Koldinghus, Koldinghus 1, 6000 Kolding until Monday October 22nd

Further information on Design School Kolding can be found at www.designskolenkolding.dk 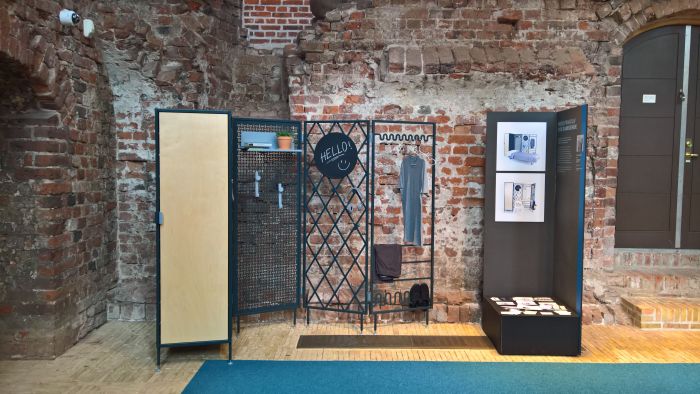 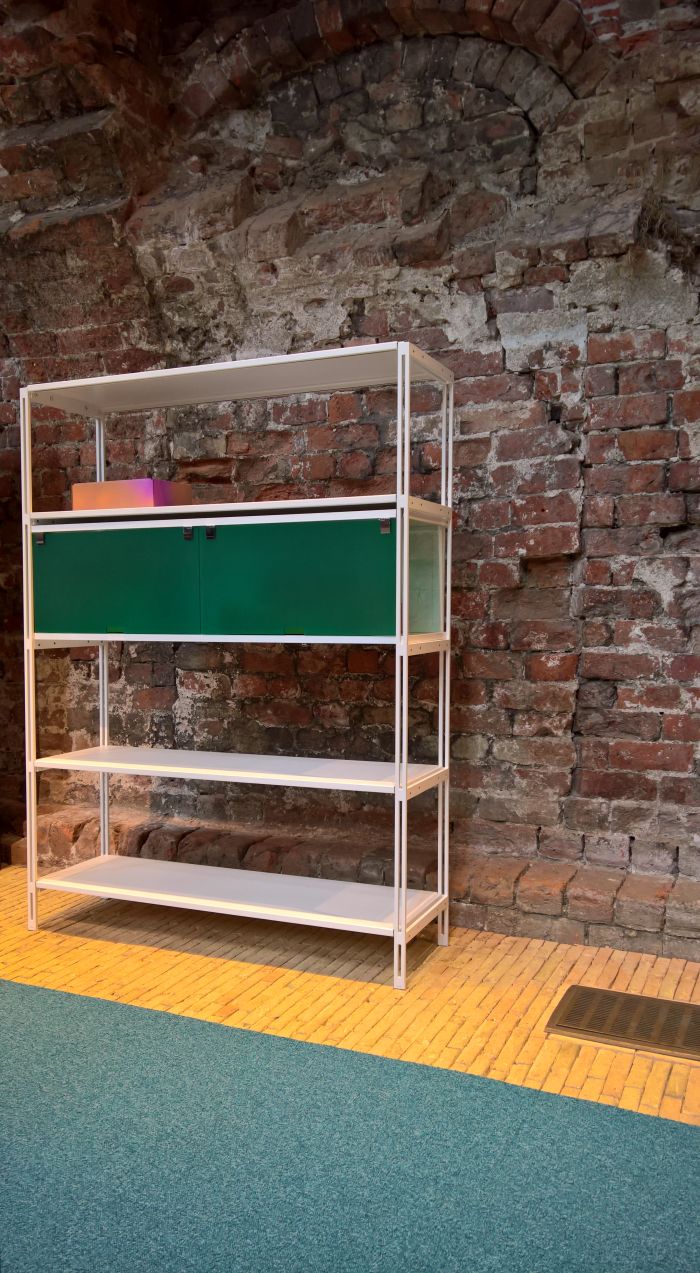 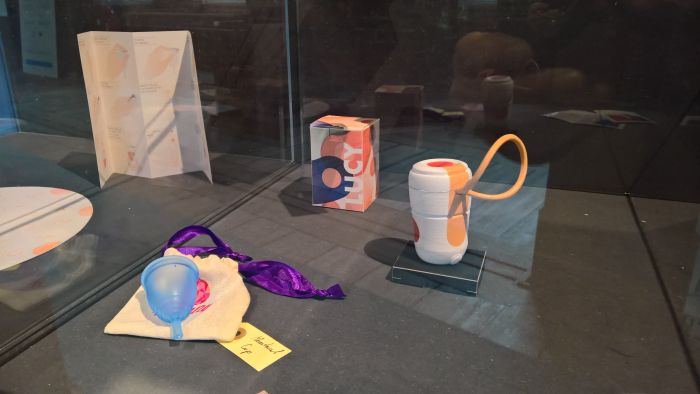 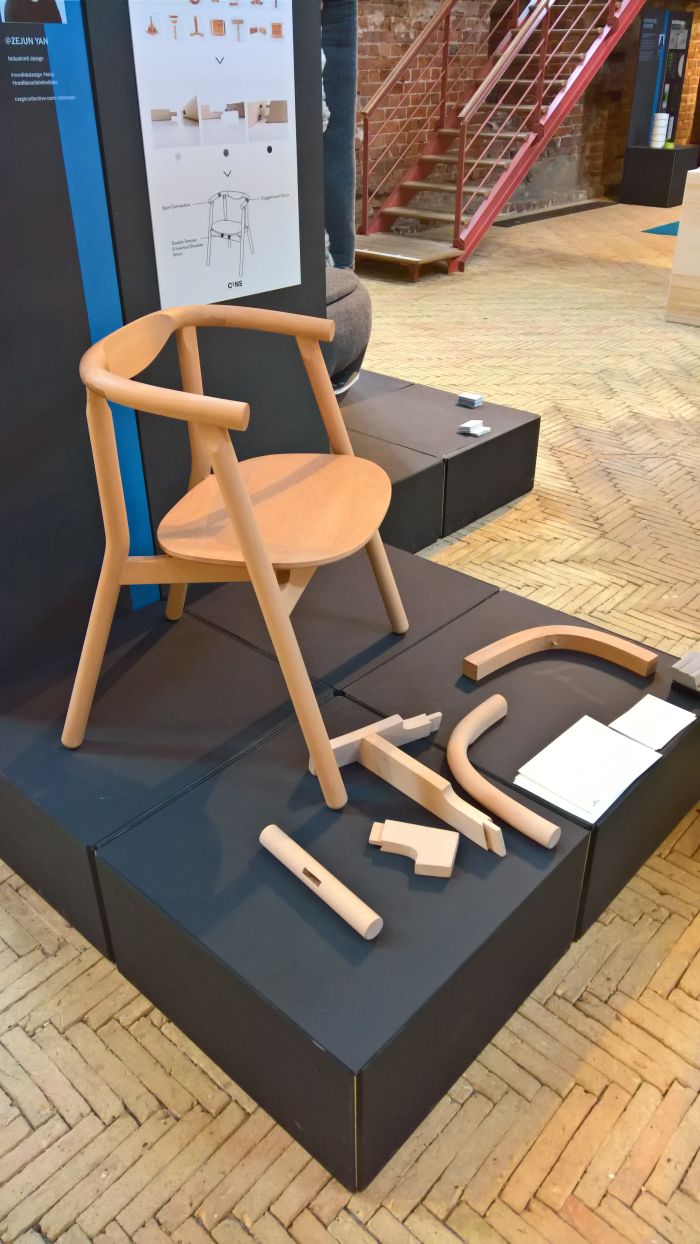 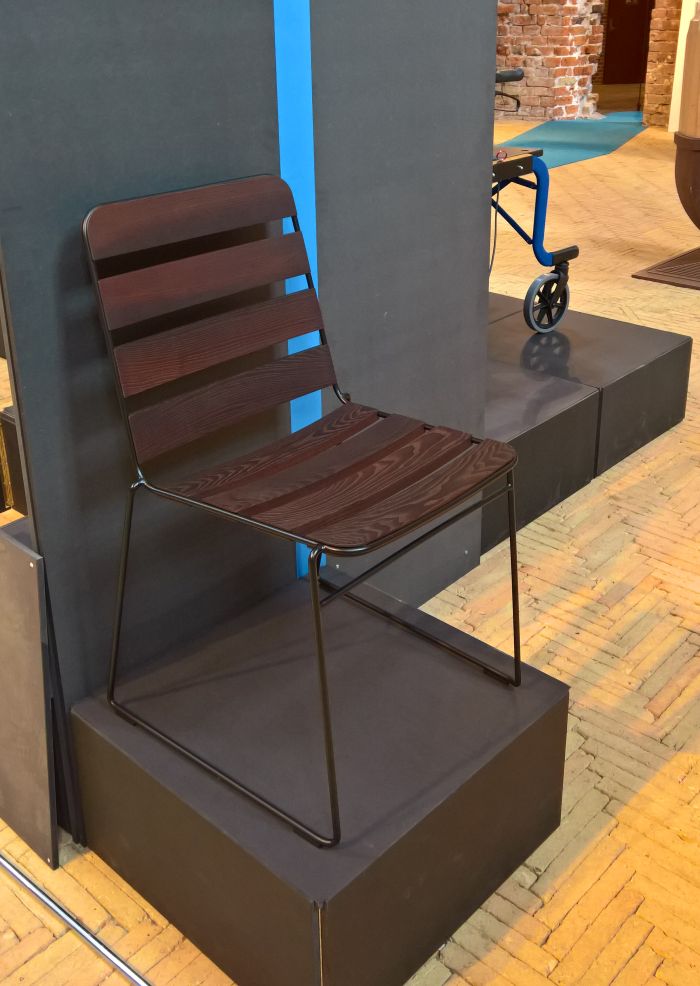 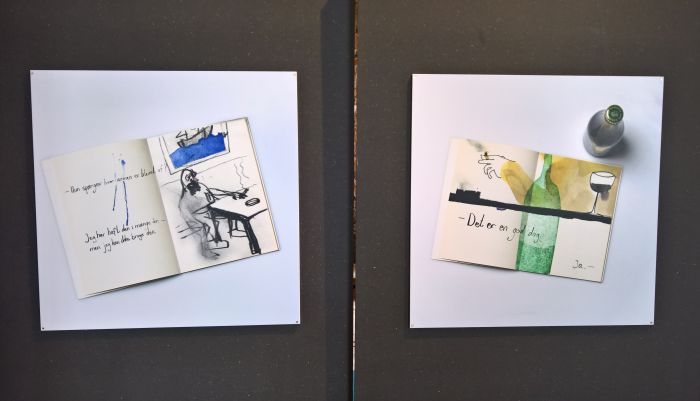