Oui Fireplace by Ronan and Erwan Bouroullec at Kunsthal Aarhus

Established in 1917 by the KA Friends association as a permanent exhibition space in Aarhus, one which should “inspire and promote a general knowledge of the fine arts”, the intervening 100 years have seen the original Kunsthal expand in three phases into a 1000 sqm multi-gallery exhibition space, a space which today seeks to inspire and promote through a dynamic programme of exhibitions and installations by international contemporary artists.

In context of the Kunsthal’s centenary, and as part of a wider programme aimed at presenting contemporary art outwith the Kunsthal’s galleries, a programme which includes, amongst other initiatives, creating a 600 sqm installation featuring 6 international artists at the 2017 Roskilde Music Festival and the sculpture A Real Danish Family by Gillian Wearing, a work to be unveiled in October at the National Gallery of Denmark, SMK, Copenhagen, and which aims to explore what “family” means in contemporary Denmark, the institute’s Artistic Director Jacob Fabricius and Administrative Director Iben Mosbæk Hofstede decided to open up, better utilise, the garden area around the Kunsthal.

In addition to re-landscaping the garden to create a more open space, a central component of the project is Oui by Ronan & Erwan Bouroullec, an installation/intervention which presents the brother’s design not only in an unfamiliar context but at an unfamiliar scale.

In many respects Oui has its origins in 2006 at the Centre national édition art image, CNEAI, on the île des Impressionnistes to the west of Paris, where, and when, Jacob Fabricius was curating the exhibition Old News and Ronan And Erwan Bouroullec’s La Maison Flottante house boat project was, well, launched: a house boat on which Jacob stayed and through which he became acquainted not only with Ronan and Erwan, but with their work.

In 2015 Jacob returned to CNEAI as a freelance curator and spent some eight months living on La Maison Flottante: thus while many may own Bouroullec objects, Jacob Fabricius is one of the few people who can claim to have lived in a Bouroullec object. A position which gives him a very personal insight into the brother’s work, “I still remember the first time I sat in one of their chairs and being overwhelmed by both the elegance and the comfort”, he recalls, with an obvious warmth, “and since then I have followed them closely. Aside from the elegance and very clean aesthetic of their design, I really appreciate the way their works look classic, but at the same time through, for example, their ways of dealing with textiles and shapes are very contemporary objects.”

The impetus to explore bringing this contemporary elegance and clean aesthetic to the new Kunsthal garden arising from the original presentation of Rêveries Urbaines in Rennes in spring 2016, “I already had some ideas about what I thought could work in the garden, and the models the Bouroullecs presented in Rennes served as the basis for exploring what could be possible”, explains Jacob the genesis of Oui. “Initially I proposed a non-permanent structure, a tent like structure, and the Bouroullecs came back with something completely different, and then a dialogue began, and that for me is the great thing about working with artists, this discussion led development process. In the course of those discussions the concept changed several times before becoming this very simple, though very poetic, gesture, a circle”

Realised in a cooperation between the Kunsthal Aarhus and the Danish textile manufacturer Kvadrat, Oui is, in effect, three concepts: two circles around trees, one around a fire and one under a lamp, yet all which in one way or another are primarily about providing fixed points, islands if you will, in the otherwise undefined openness of the Kunsthal garden.

Arguably, îles des Postimpressionnistes, in the otherwise undefined openness of the Kunsthal garden. 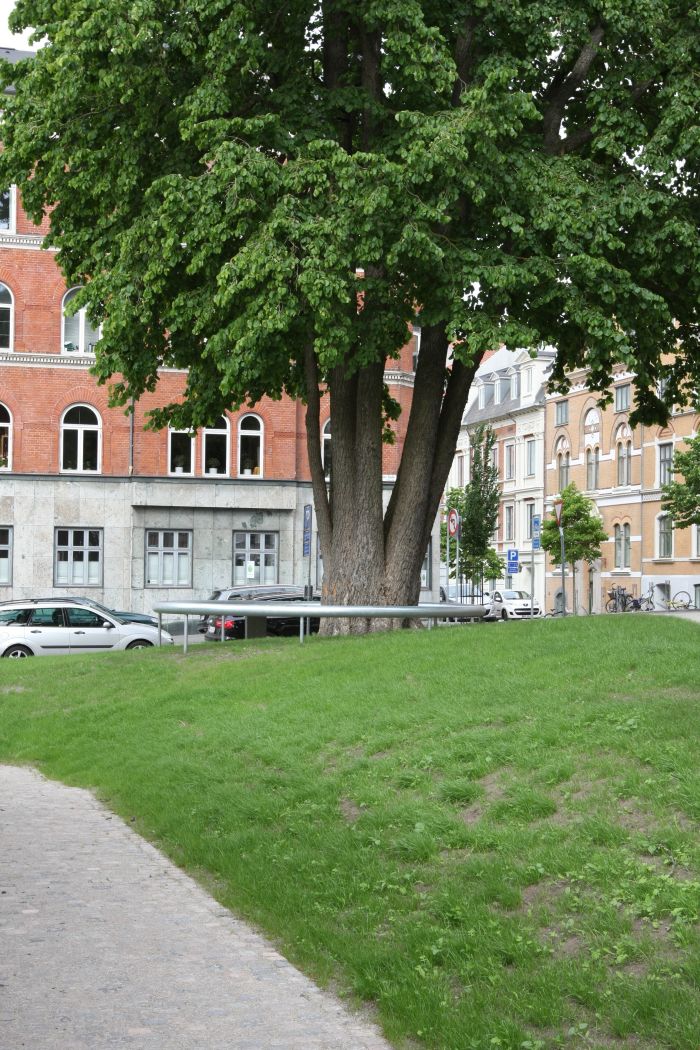 The Swiss sociologist Lucius Burckhardt once bemoaned that in what he refers to as malerisch gardens – scenic, picturesque gardens in the romantic tradition – “the bases of the trees are always skirted by bushes, an attempt to represent pseudo-natural forest edges.”1 The result, according to Burckhardt, is that the garden visitor is denied an agreeable place to rest, for all in summer when the shade of the tree offers natural respite from the sun.

While admittedly not 100% certain if Lucius Burckhardt would fully approve of Oui, the project does very elegantly provide for agreeable under tree sitting.

Not least because of the extra space and possibilities created. Regardless of how old the tree was under which our romantic gardener was stopping Lucius Burckhardt wiling away his summer afternoon, were he to be joined by many more than four fellow shade-seekers, it would start to become a little crowded. By expanding the tree through the ring one increases not only the number who can enjoy the shade of the canopy, but also the range of sitting options and levels of interaction. You can not only sit on the ring, facing in or out, literally as well as philosophically; but if you prefer you can sit on the ground, using the ring as backrest, or ignore it altogether, lean against the tree and face those sitting on the ring. Thus rather than being just a place to rest and escape the sun, the space under the tree becomes a meeting point, a place of potential interaction.

A functionality, and spirit of togetherness, which is perhaps more instantly demonstrated by the Fireplace. 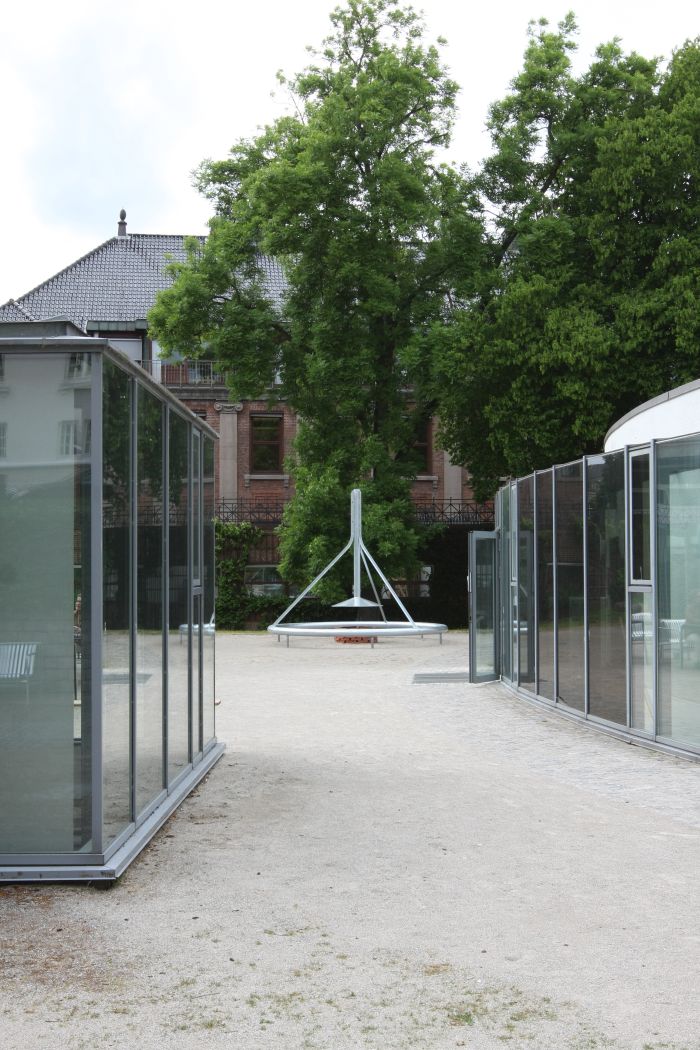 Oui Fireplace by Ronan and Erwan Bouroullec at Kunsthal Aarhus

Back in the day every village had a central oven for baking bread, a village oven that was also by default a central meeting and communication point. In our more enlightened times when we gather round a fire it tends to be in small private groups around a camp fire or a backyard firebowl. With the Bouroullec’s Fireplace the Kunsthal Aarhus reintroduces the opportunity for communal, public, gatherings round an open fire. They even provide the firewood. You just have to bring your own Snobrød, agreeable red and good humour. In addition to allowing the public to benefit from the Fireplace, the Kunsthal plan to light a fire at every exhibition opening, come snow or shine, thus creating a natural meeting point away from the exhibition, and so enable a different form of interaction to that which occurs inside the galleries.

Far less opulent than that vision presented in Rêveries Urbaines, the Aarhus Fireplace is a much more paired-down state of affairs: thankfully, the large disc atop the Rêveries Urbaines Cheminee would have been way out keeping with the space in which it now stands.

Which brings us neatly back to what we noted in Weil am Rhein: with Rêveries Urbaines the Bouroullec’s have created a basic grammar for urban furniture, one which can be adapted to suit the specific location. Or put another way, while the four objects have no direct relation to the Kunsthal Aarhus, as objects they make perfect sense there. 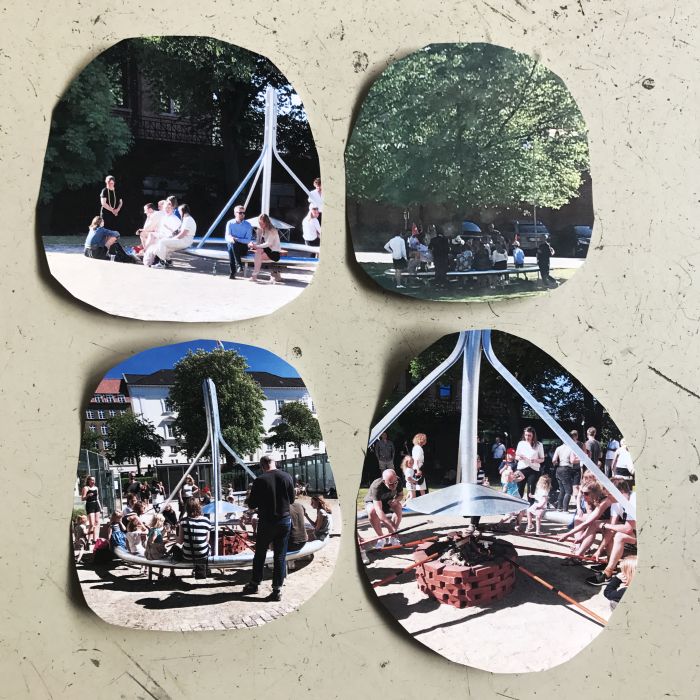 An important feature of Oui is illumination. Not only does one of the rings feature an integrated light, but the two under tree rings are complimented by spotlights high in the chestnut above them.

Sadly we are unable to make any comment on the illumination, for although we were in Aarhus overnight, we were in Aarhus over a thunderstorm and torrential rain night. While great for the new grass, it was no weather for considering the finer aspects of garden illumination. But let’s just assume the lighting works: the Bouroullecs have long experience in working with light, and when an experienced curator such as Jacob Fabricius describes it as “a beautiful, almost magical light, as if a UFO has landed” we really see no reason to doubt him. But we haven’t actually seen it. We will however be back in Aarhus later this summer, when it will hopefully be dry. Or at least drier.

What the lighting does however neatly highlight – sorry – is that the rings are artificial, something also underscored by the decision for the rawness of galvanised steel as a material and the coarseness of the construction.

It would have been very easy to have finished them in wood, with invisible joints, and thereby present a very simple segue from ring to tree to garden. Or perhaps better put, and to return to Lucius Burckhardt, present a “pseudo-natural” segue from ring to tree to garden. The decision for exposed galvanised steel is much more pleasing, reminding us as it does that we are very much in an artificial situation, we’re in a landscaped space in a city. Not an untamed forest. We’ll leave each of you individually to extrapolate the symbolism as far as you personally feel comfortable……

Equally pleasing is that the rings contain neither plug nor USB socket; again it would have been very easy to include such, would however have been most, most Un-bouroullec 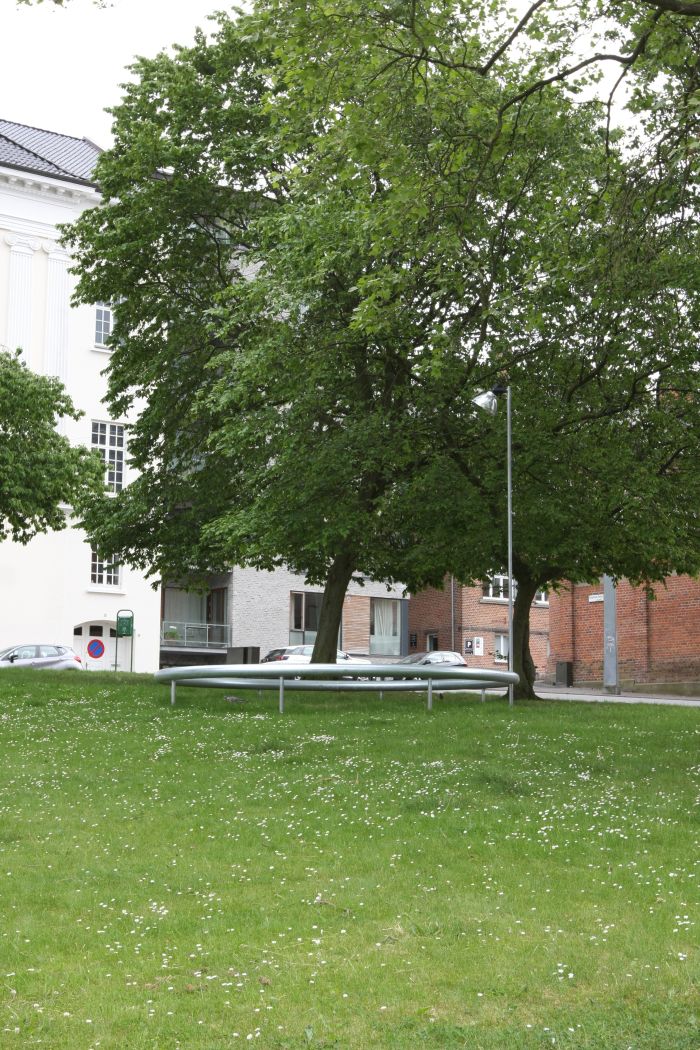 When we first read about Oui we feared the objects would be locked inside the garden and thus only available when the museum is open. We needn’t have feared. Not only is the garden a bijou affair, but it is not enclosed, and thus the structures are accessible 24/7: for museum visitors to either regroup or sit and reflect on what they have just viewed, or anyone in Aarhus at anytime of the day or night.

As we noted previously, with projects such as Oui no one is claiming that Ronan and Erwan Bouroullec are now our leading contemporary landscape architects. They’re not. Much more we see such a project as being about transferring the Bouroullec’s ideas on functionality, materials and construction into public spaces, about exploring those ideas in a new context, and seeing what, if, can be learned from the experience. And specifically we see the Aarhus project as an extension of the Bouroullec’s focus on connections and connectors. Oui. We. Vi.

Full details can be found at http://kunsthal.dk/ 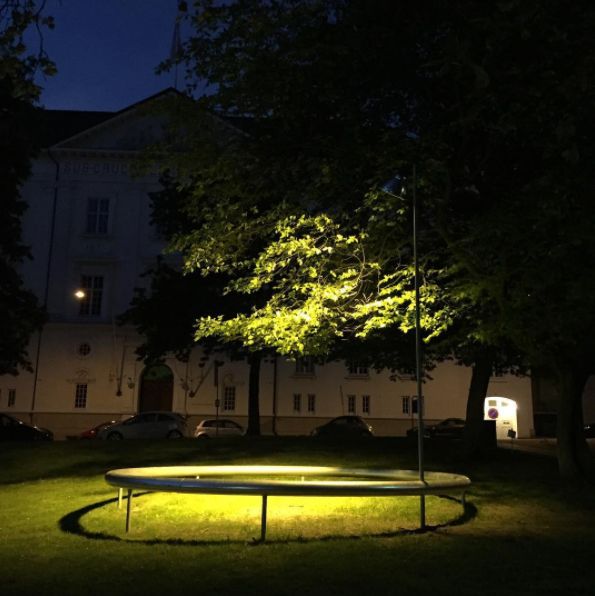 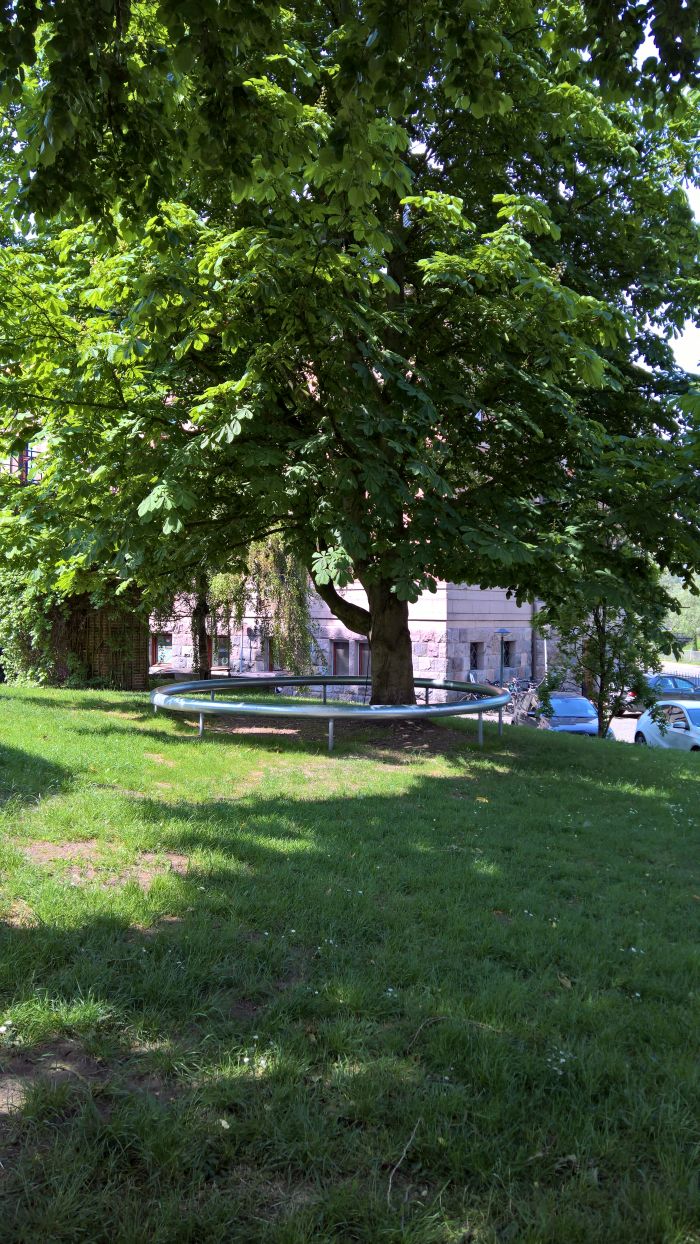 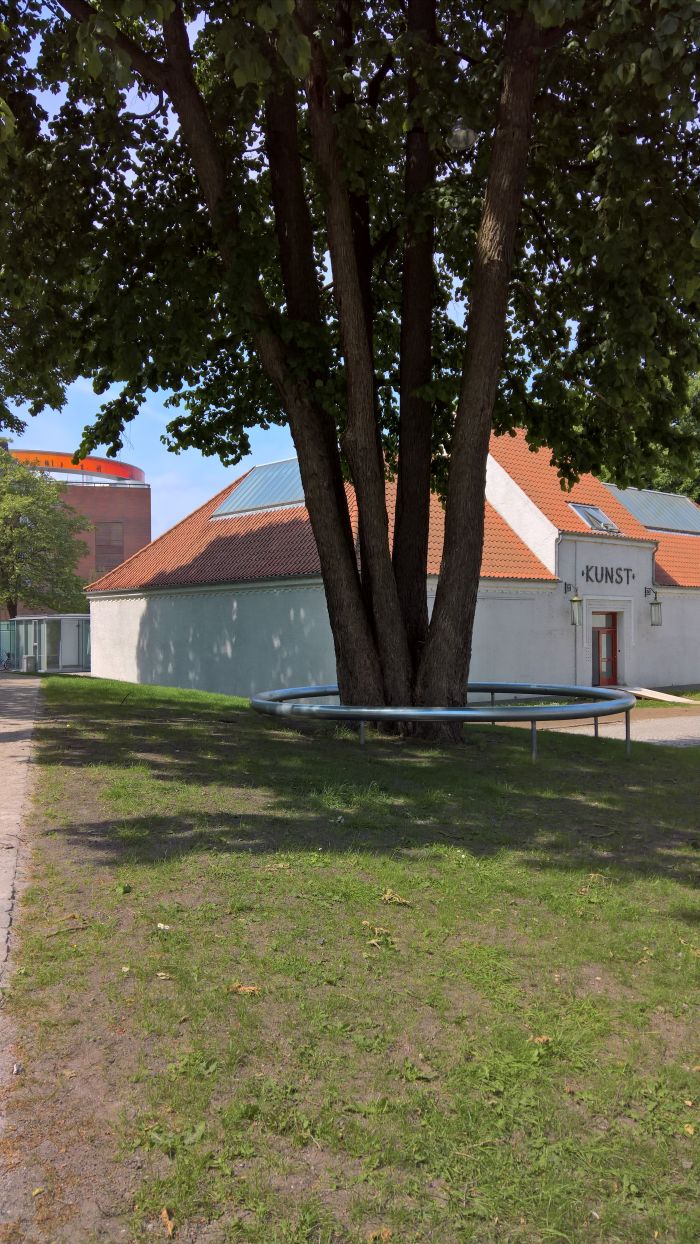 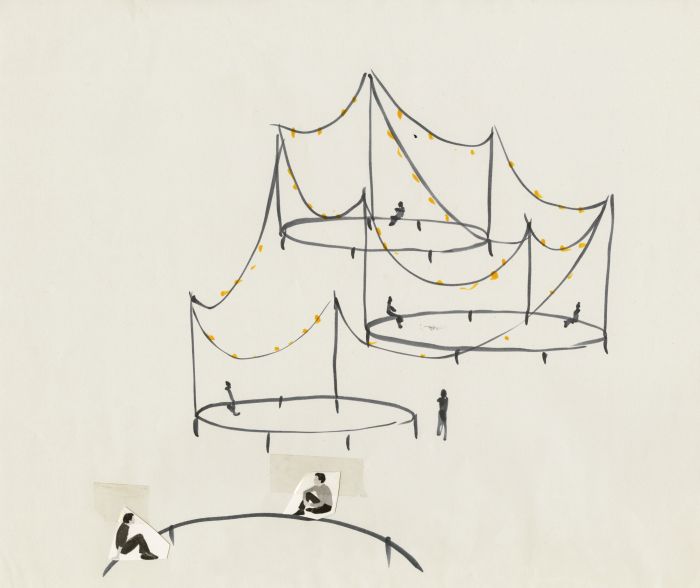 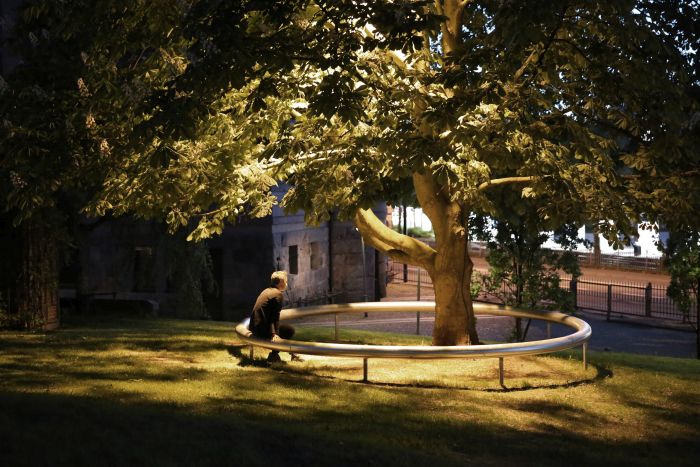