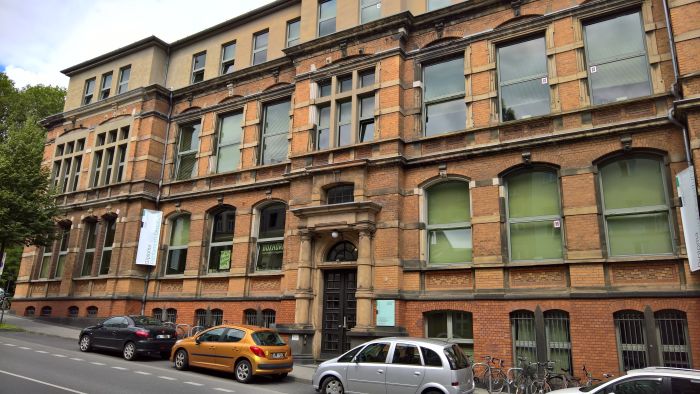 In what is becoming a popular, almost ubiquitous, sentence in these pages, and one we suspect we will return to at a later date, the Fachhochschule Aachen was formed in 1971 from the fusion of five existing higher education institutions: Aachen Textile College, Construction College, Mechanical Engineering College and the Werkkunstschule Aachen, plus the engineering college in the nearby town of Jülich. Maintaining campuses in both Aachen and Jülich the Fachhochschule Aachen became FH Aachen in 2009 and today offers a variety of courses across a wide range of scientific, technical and business disciplines, in addition to studies in architecture and design.

The Design Department in Aachen is, more or less, a direct descendant of the city’s 1904 Draughting and Applied Arts college, an institution which over the subsequent decades took on numerous guises, and at the time of the fusion was the aforementioned Werkkunstschule Aachen offering instruction in a range of artistic and craft disciplines. 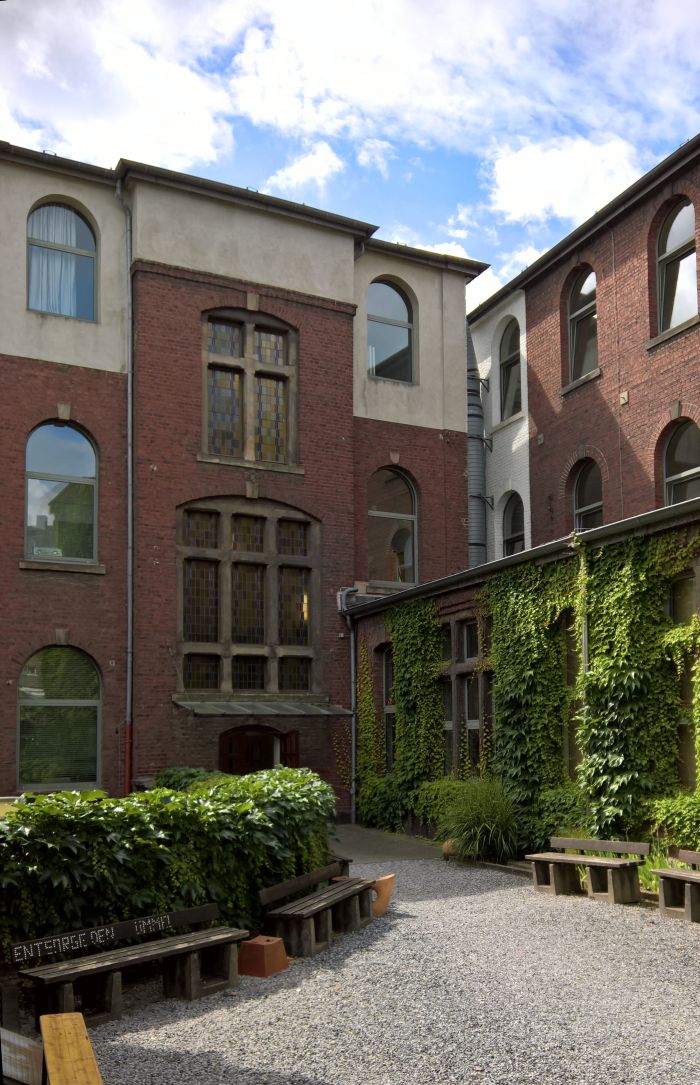 The FH Aachen represents a third type: two exhibitions, one of semester projects and one of graduation projects. A week apart. Which is fine if you live in Aachen. Ever so slightly irritating if you live close enough to Aachen to visit, but far too far away to visit twice in seven days.

We’re not picking on the FH Aachen, there are a couple of other design schools who do the same, but knowing that there was another exhibition you haven’t seen and which compliments that which you have seen, does leave one with the feeling of a chance missed. Regardless of how good that which you did see was, there is always what might have….. But then that is, more or less, our permanent state.

For logistic reasons we only attended the Diploma graduation exhibition, which we have to say was without question the best catered exhibition we are at all summer. Not that we partook of the various canapés, pastries or snackettes on offer, even if the the smell of the popcorn on the communication design corridor was one of the real highlights of our #campustour, no, our focus was much more those delicacies to be found on the Smörgåsbord of graduation projects…… 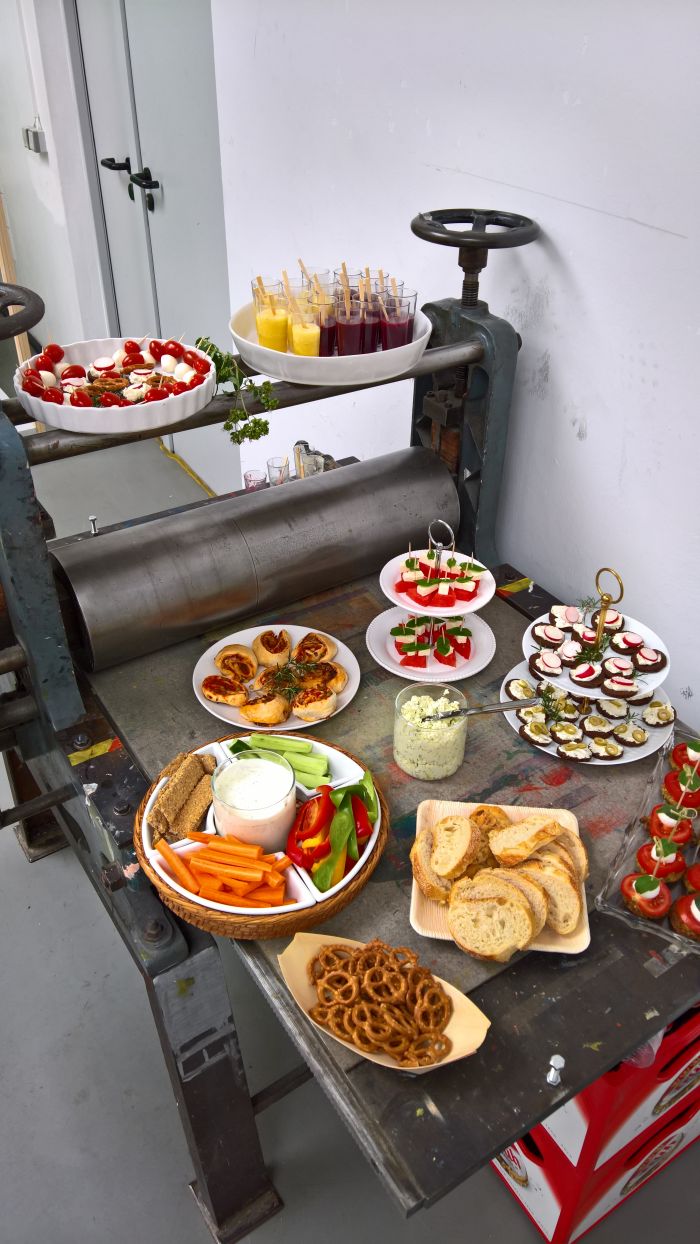 Thank you, but we didn’t partake… we’re not a food blog!

The brain not only processes visual input but interprets it, including filling in the gaps of anything it understands as incomplete. It’s why optical illusions work, why you can’t find Wally and allows you to appreciate landscapes. Lina Fischer has neatly employed this innate brain function to reduce her sofa Alma: passing the arms/legs through the backrest and seat disrupts the line, confuses our sense of logic, forces the brain to complete the image as best it can. The result is an object with the most delightful visual lightness. Which almost vanishes into itself.

Based on an elegantly simple construction principle and combining familiar materials in a neatly proportioned, intelligently formed and very accessible object, Alma is a lot more sofa than it looks, without being more than it need be. 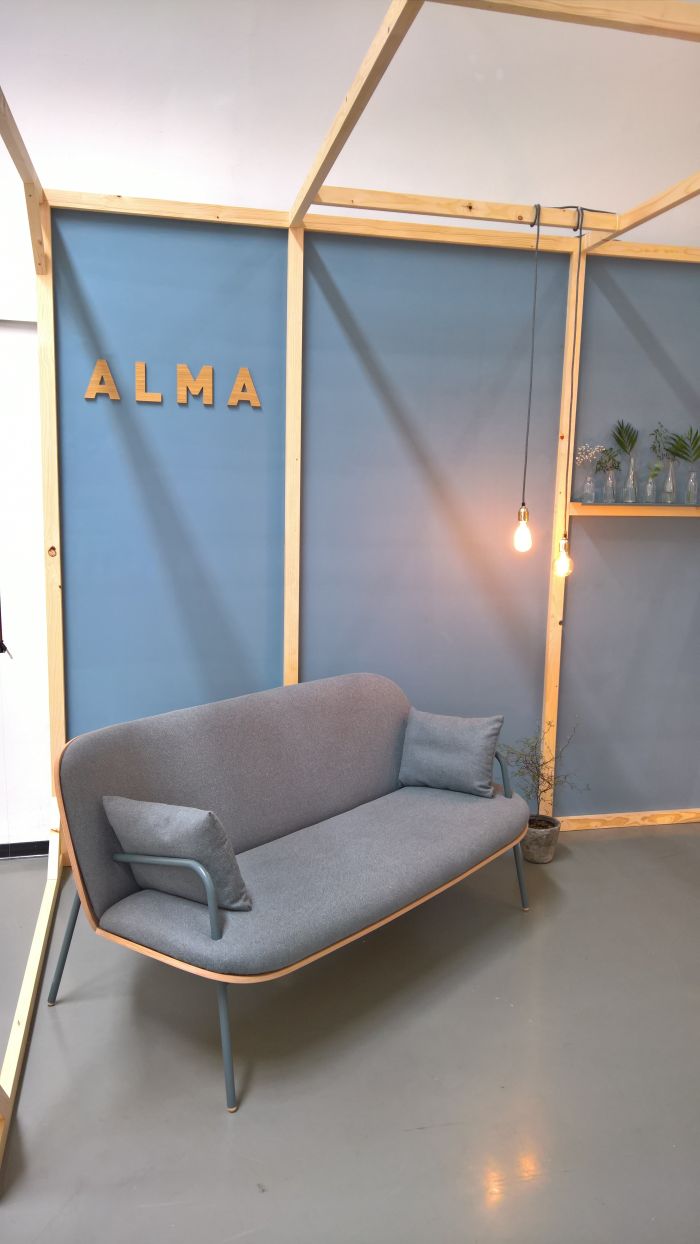 Alma by Lina Fischer, as seen at Diploma 2017, FH Aachen 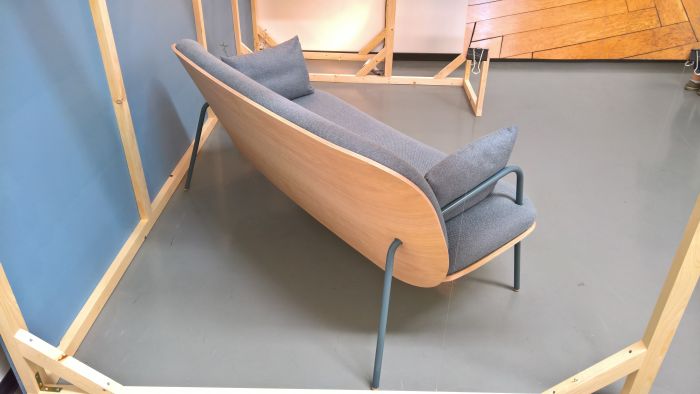 Alma by Lina Fischer, as seen at Diploma 2017, FH Aachen

Tape takes its name from the band of textile wound around the frame to create the seat. Yet for us the defining feature is the modularity. Essentially composed of a few repeating elements Tape can, theoretically, be reconfigured and altered as and when required, for example switching between the wood, plastic or textile band backrest as the situation demands, whereby we’d recommend not so much exchanging the textile band backrest as losing it. For us there is simply a little too much of the self-righteous teenage white Rasta going on there, formally and in the lack of anything approaching authenticity or seriousness.

While beyond backrests we are certain that as a system there a few other modular elements still to be developed which could/would allow for a wider frame of use.

Flat pack chair shipping isn’t new, it’s what Michael Thonet did in the late 19th century: 36 Chair 14s + a one square meter box = global success. However, with the rise and rise of online shopping and the associated increase in package distribution, smaller, lighter packages are the only responsible solution for the furniture industry, and must be a goal for all involved. If realised as such Tape wouldn’t the first contemporary flat pack chair, but through its production, construction and modularity is a very intelligent and interesting proposition. Apart obviously from the textile backrest….. Sorry! 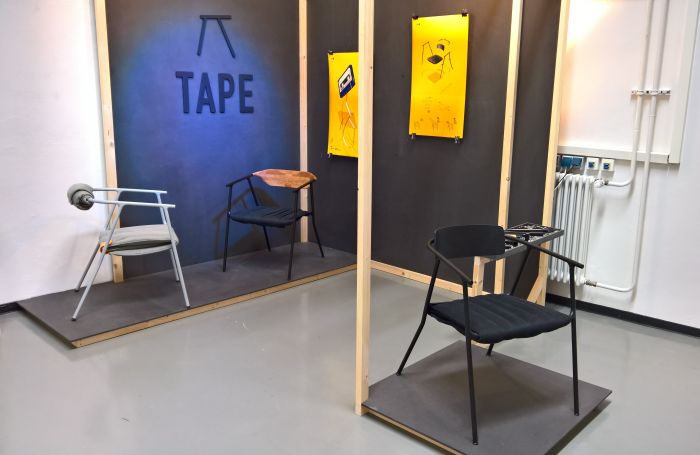 Tape by Julian Gerullis, as seen at Diploma 2017, FH Aachen 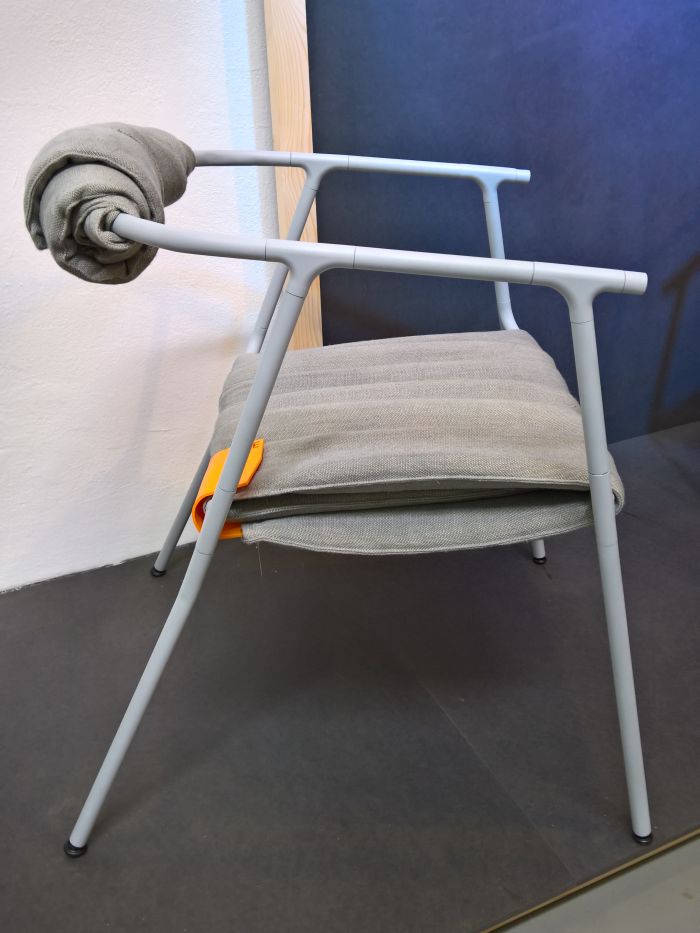 Tape by Julian Gerullis, as seen at Diploma 2017, FH Aachen

We’ve often noted that the side table with integrated lamp is an eminently sensible genre. Particularly in terms of bedside tables, why cede table space to something which is in effect an essential component? Integrate it, you need it.

If Noa is the answer? We’re not 100% sure. Formally we’re not feeling it as much as we assume we should be, but for all we need convincing that the field of illumination will be appropriate in real world situations to allow, for example, reading in bed. Are however fully convinced that in a child’s room as a lamp-on-timer which dims slowly as the child dozes, possibly at altering hues, it is a very interesting proposition.

And although realised in context of a project looking at encouraging and supporting healthier sleep patterns, and thus specifically conceived as a bedside table, we can well imagine Noa working just as well in a living room, or in a longer, thinner version as a hallway table, for all hallways which have no/limited natural light. As such we see a lot of potential in the concept and are already looking forward to rechristening Noa Yesa.

Full details on the FH Aachen can be found at www.fh-aachen.de, and all FH Aachen Diploma projects at www.diploma-ac.de 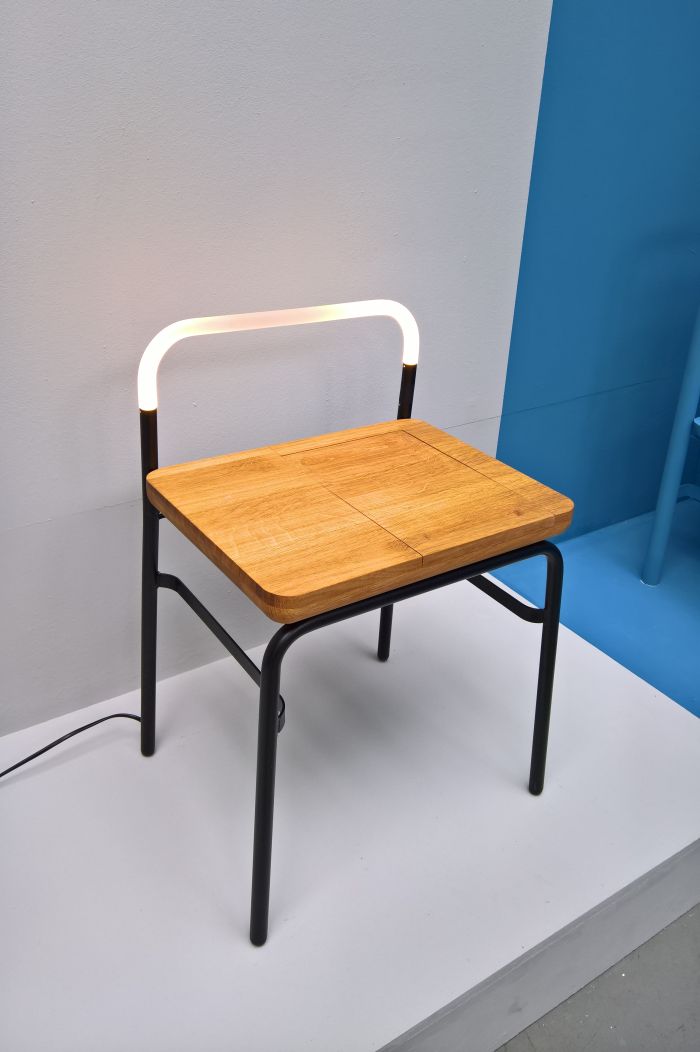 Noa by Christina Radermacher, as seen at Diploma 2017, FH Aachen 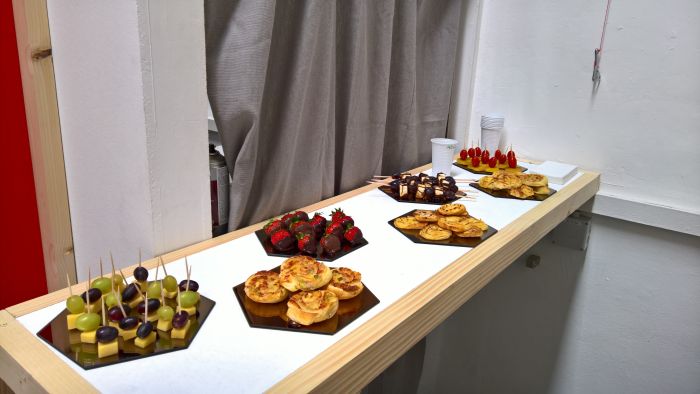 …..you’re not making saying no any easier!. But thank you.