On our recent #campustour we didn’t only view the students’ works, and chat to students about their works, we also spoke to members of the design schools’ teaching staff about their motivations, methods, experiences and views on contemporary design eduction.

Whereby one of the peculiarities of design eduction is that any given school’s staff is a mix of full time staff members and practising designers who teach selected courses, or in the case of designer Peter Marigold a whole Studio, the central teaching concept at the Sir John Cass School of Art, Architecture and Design, or the Cass London as it more familiarly known. 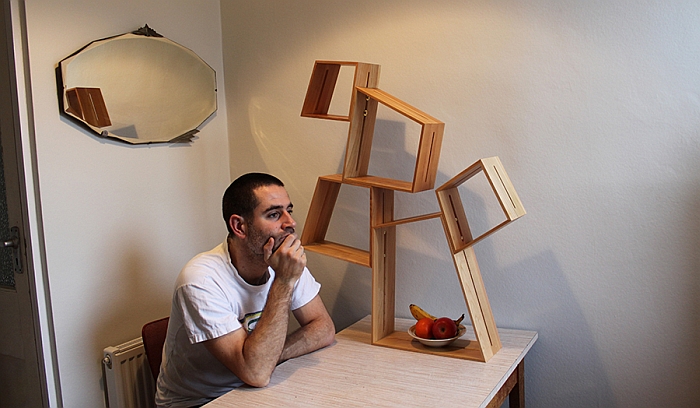 Born in London Peter Marigold initially completed a Bachelor of Arts in Sculpture at the city’s Central St Martins College, something he describes as “an absolute red herring”, before finding his way to design via the Design Products Master’s course at the Royal College of Art where he studied under, amongst others, Ron Arad. A founding member of the very, very loose OKAY Studio “collective”, in addition to numerous cooperations with international galleries and manufacturers, Peter also produces and distributes his work himself, his most recent project being FORMcard, a mouldable bioplastic that comes in a handy credit card form and which was realised through Kickstarter. A recipient of numerous awards Peter is currently on the shortlist for the BBC Radio 4 Woman’s Hour Craft Prize, run in conjunction with the Crafts Council and the Victoria & Albert Museum London.

Since 2014 Peter Marigold has been a tutor at the Cass London, leading one of the two furniture and product design Studios, and thereby responsible for setting semester projects and working with those students in his studio. In context of our 2017 #campustour visit to the Cass Summer Show we spoke with Peter Marigold about Cass, Kickstarter and the contemporary design industry, but began, as ever, by asking him why the decision for a career in design, or perhaps better put, why eventually the decision for a career in design…..

Peter Marigold: I have always liked objects, be that toothbrushes, pop-up books, handles, I have always been fascinated by objects, and for all engaging with the object world, and the way you engage with the object world is through designing it. Which was something I initially didn’t understand, and so I studied sculpture, which was an absolute red herring: I really don’t enjoy art and if I’m honest don’t see the point in most of it, find a lot of it just unintelligible. After graduating I worked in various, related, fields, scenography, model building, costume design and then I visited an RCA summer show and realised that design was what I enjoyed, what I was interested in and for all what I should have studied, and so I enrolled for the Design Products Master which was the best decision of my life! This is where I am meant to be!

smow Blog: And now you’re at Cass London. You’ve been here since 2014, how did the position here arise?

Peter Marigold: Assa Ashuach and Tomoko Azumi, two designers who used to work as tutors here, asked me to come and give a talk, the students responded very well and so I was invited back to give some tutorials, which was an experience I very much enjoyed. Subsequently I was asked if I wanted to run a Studio and my immediate reaction was, yes I would!

smow Blog: Which brings us nicely to the Studios, the central, defining, feature at the Cass. Is the idea with the Studios that the students work together as a team……

Peter Marigold: ….they don’t work together as a team, but work in the same space, and can cooperate, and that is a teaching method I very much approve of, not least because I’ve never been a team player, have always hated being told to work in a group, therefore I am quite sensitive about setting group projects, we do do them, but when we do, they are then generally very short, so one day or one week projects. For me it is much more important to create a sense of community within the Studio, an environment where ideas are bouncing around, and when that occurs you can really see there is an energy going through Studio, that ideas are cross pollinating and that is when the best, most interesting, works arise, from this communal energy, and that is also when I enjoy it the most.

smow Blog: Aside from creating such a community feeling, what do you see as your role at Cass?

Peter Marigold: On the one level I want to help my students get the best they can out of a particular project, through discussing what a particular object is, encouraging them to always challenge why they are doing something a particular way, to question if there is an alternative, if it could be done differently. And on another level I want, through my experiences, to give them relevant food for thought and show them what is there for them and where they can go with their careers, which includes giving them the most realistic impression of the design industry they will ever get, because no one ever told me! Even at the RCA my tutors didn’t tell me about all the tricks, underhand cheating, the thieving that is out there! I tell them all the horror stories I have been through, be it at the hands of manufacturers or galleries, and so make sure my students leave here with a very realistic impression of what awaits them!

smow Blog: Which kind off saves us asking if business aspects are taught at Cass! But is that also the reason for the Cass Starters Kickstarter project you had last year, where the students crowdfunded projects……..

Peter Marigold: In a way yes. When I launched my FORMcard project on Kickstarter that was like a door opening to the alternative universe where everything is how it should be! You design something interesting, you believe in it, you show it to people, they buy it. And that was just when I was starting at the college, and I thought, I have to show the students! I have to show them there is another way, that there is not only this traditional nightmare that most colleges train their students to enter, and I strongly believe that it is important to show students that there is this other world, that there are alternatives.

smow Blog: And generally do you see Kickstarter as a way forward for designers…..?

Peter Marigold: Very much so. What can possibly go wrong? The worst that happens is you lose time and money in producing a film, and may, vaguely, look a bit of a failure. But it is also the ultimate in micro-research, if no one’s interested it means you don’t waste your time developing an uninteresting idea, and so you’re gaining that experience. And if it’s a success it means people are buying it directly from you, which is the best route. I still work with companies, but I am now a lot more conscious of what that means and what that entails, and I know that no matter which company it is, you as a designer have to be actively involved in the project, in pushing the project, if it is to be a success.

smow Blog: To be successful with Kickstarter you have to be visible online, is social and online media something you actively teach……….?

Peter Marigold: We do talk about, for example, Facebook advertising, viral marketing, the potential of design blogs and generally how to disseminate your work, but only in context of crowdfunding and Kickstarter, and not in a wider context. And not that you’ve asked, I’m not sure why not, except that, possibly, because everything here is so workshop based and the projects I give the students are generally quite physical, very quickly the focus is on a materialand on developing an object from that. In contrast I spent a year working at a college in America which was much more computer orientated, and the students there were totally paralysed by the design world, and as soon as you gave them a project they would invariably start researching through design blogs and terrifying themselves with what was already out there. But here we haven’t yet felt the curse of the design blog, but maybe that is something we should discuss!

smow Blog: Changing tact slightly, understandings of design and the role of the designer are changing, does design education also have to change, or is it a question of focussing on, lets say,  traditional ground principles……?

Peter Marigold: I think design education does have to take into account that realities are changing, but what I’ve understood from my time here is that a lot of young people know a lot more about what is currently going on in the world than many of us older generations, that they view things from different perspectives and are much more open for trying new things. And so I don’t think we need to necessarily teach new things as ensure there is space for new ideas and new perspectives in the teaching and not get too caught up in traditional concepts, patterns and processes.

smow Blog: And briefly to end what would be your advice for any young designer or recent graduate?

Peter Marigold: Always be at your exhibitions. You never know who’ll come round the corner! Pretty much all of the opportunities I have had, have come from meeting someone at an exhibition. But most importantly, only do what you enjoy. If it’s not enjoyable, just stop doing it!

Full details on the Cass London can be found at www.londonmet.ac.uk/the-cass, and on Peter Marigold and his work at http://petermarigold.com/