If you compare our claim to have visited 27 design schools on our 2017 #campustour with the number of semester exhibition posts published, you’ll find a small discrepancy. There aren’t quite 27 posts.

We did visit 27 design schools, did plan to post from all schools visited, but then didn’t. The reasons for the non-inclusions are varied, some technical, some practical, some conceptual, the Hochschule Hannover’s absence is particularly interesting as it neatly underscores one of the major traps that awaits anyone undertaking such a tour: misinformation.

Although not opposed to student presentations, for us it is very much the case of either you sit through them all or none; time constraints meant that sitting through all wasn’t an option, we did however decide to spend a few minutes in the lecture theatre just to say we had been there. Before undertaking our #campustour interview with Hochschule Hannover Assistant Professor Patrick Frey, heading to the Hochschule für Bildende Künste Braunschweig, who did have an exhibition, and ultimately leaving Niedersachsen.

The five minutes we spent in the lecture theatre were at that point when Jan Christian Schulz was presenting his graduation project, and more precisely, the last five minutes of his presentation; consequently, we couldn’t really join the dots, couldn’t really grasp what was going on, decipher what he’d actually done. But knew we’d like to.

And that we thought was that. Until Milan 2018 where Moorwerk by Jan Christian Schulz is/was one of the nominees in the competition ein&zwanzig organised by the Rat für Formgebung [German Design Council] 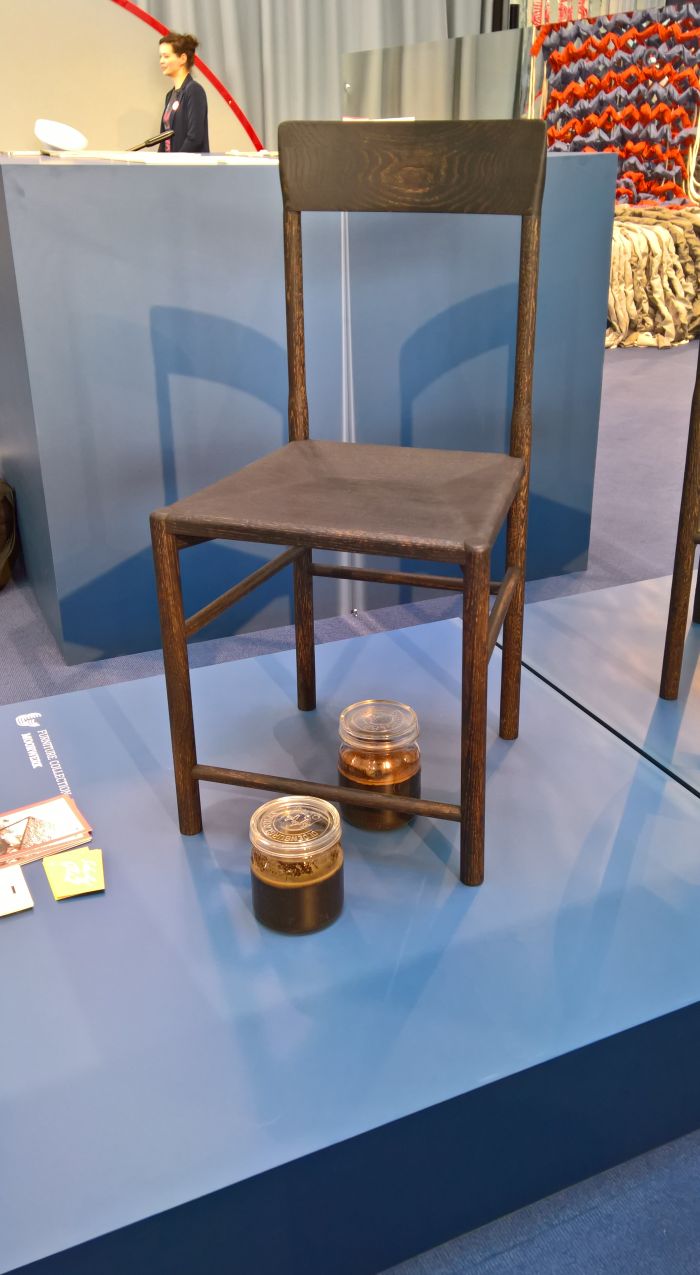 The result is two fold: wooden furniture objects based on historical, potentially vernacular, models, and a wood surface treatment process rooted, literally, in the region and its environment.

In context of the ein&zwanzig exhibition Jan presented his chair, a work which takes the formal, structural and constructive basics of an historical model and re-interprets them, reducing, clarifying them to create an object which both highlights the essentials of the original and also creates a much simpler, less involved, more rational object. Characteristic of the chair, and something taken over directly from the original, is the high back; it’s not quite the full ladder chair back, this is no Charles Rennie Mackintosh/Shaker construction, but it is higher than most contemporary wooden chairs, and a height which through the proportions of the supports and backrest, and also the relationship between the wood and the void, appears logical and natural, while also adding to the overall sitting comfort.

A particularly nice touch is the milling of the seat to reflect the form of the woven reed seats of yore. Yes, Jan could add a reed seat, but the intimation set in wood is not only practical and comfortable, but much more in keeping with the spirit of the concept.

Aside from its form the defining feature of the chair is its colour, an unassuming black. Black as peat one could say. Or more technically, black as Mooreiche – Bog Oak.

A variation not a variety of oak, bog oak arises when oak trunks are submerged in peaty bogs over a prolonged period, the tannic acids within the wood reacting in the sulphurous, low oxygen environment with iron salts in the peat to cause physiological and chemical changes in the wood. And colouring the oak a range of hues from blueish grey to black black.

By its very nature bog oak is, relatively, rare, while the peculiarities of the drying process mean that bog oak suitable for furniture production is an even rarer, and much sought after, commodity. And consequently expensive. In contrast to centuries past, when although, relatively, rare, bog oak would have been a commonish material in the marshlands of Niedersachsen.

Questioning if there was an alternative which would allow his contemporary moorland furniture to reflect this “native” wood variation without being a costly unicum, Jan began researching bog oak and ultimately developed a process for creating bog oak, essentially, in vitro; as with his chair Jan’s “bog oaking” takes the basics of the original process, reduces it down to the essentials and thereby allows for a much simpler, more rational, if every bit as natural, process.

Yes, we hear you at the back, you could just stain the oak black. But, and as usual, you are missing the point. Jan’s “bog oaking” process is not only a sustainable bio-chemical process which darkens the oak via the same natural, durable, if much accelerated, process as that achieved through leaving a tree in a bog for 800 years, but one which allows for the creation of much more cost effective, semi-industrial, bog oaked furniture objects. And a natural bog oak shines with a charm and honesty far removed from a black stained piece of oak.

Clearly not a mass market process, not least because such would create the same social and ecological stresses that are caused where industrialists try to exploit farmland to make a quick buck from quinoa, aloe vera, cherry tomatoes et al; however as a small scale local production process, combined with locally rooted and produced furniture, “bog oaking” is certainly an interesting proposition. And not alone in Niedersachsen, but anywhere with a preponderance of suitable bogland.

But for all Moorwerk is a very, very nice piece of design research.

More information on Moorwerk can be found at http://moorwerk.com and for all in or near Milan the Moorwerk chair can be viewed as part of the ein&zwanzig exhibition, Via Tortona, 31, 20144 Milan until Sunday April 22nd, an exhibition which features a further 20 student/graduation projects including overall winner Gradient by Sofia Souidi and smowblog regular KOR by Martin Tony Häußler. A project we did first meet at a semester exhibition….. 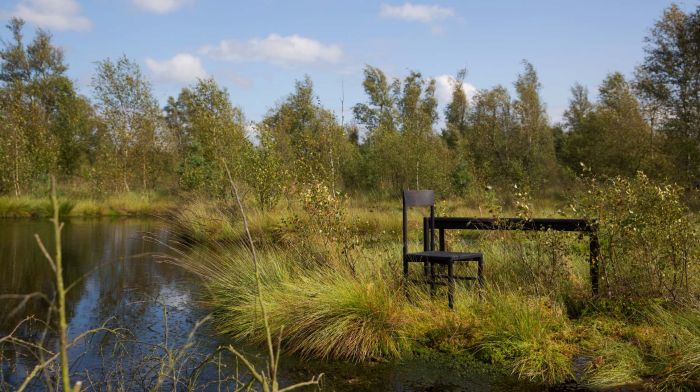