Our visit to the 2017 Royal College of Art London Graduate Show was one of the more sobering moments of our 2017 #campustour.

Or as we wrote then, “…in a world controlled by RCA graduates every, but every, aspect of our lives will be controlled by autonomous smart technology. We will literally lose the ability to think for ourselves. The human brain will become the appendix of the 21st century.”

Donning a hat fashioned from aluminium foil and an old metal sieve, we headed once more to South Kensington…… 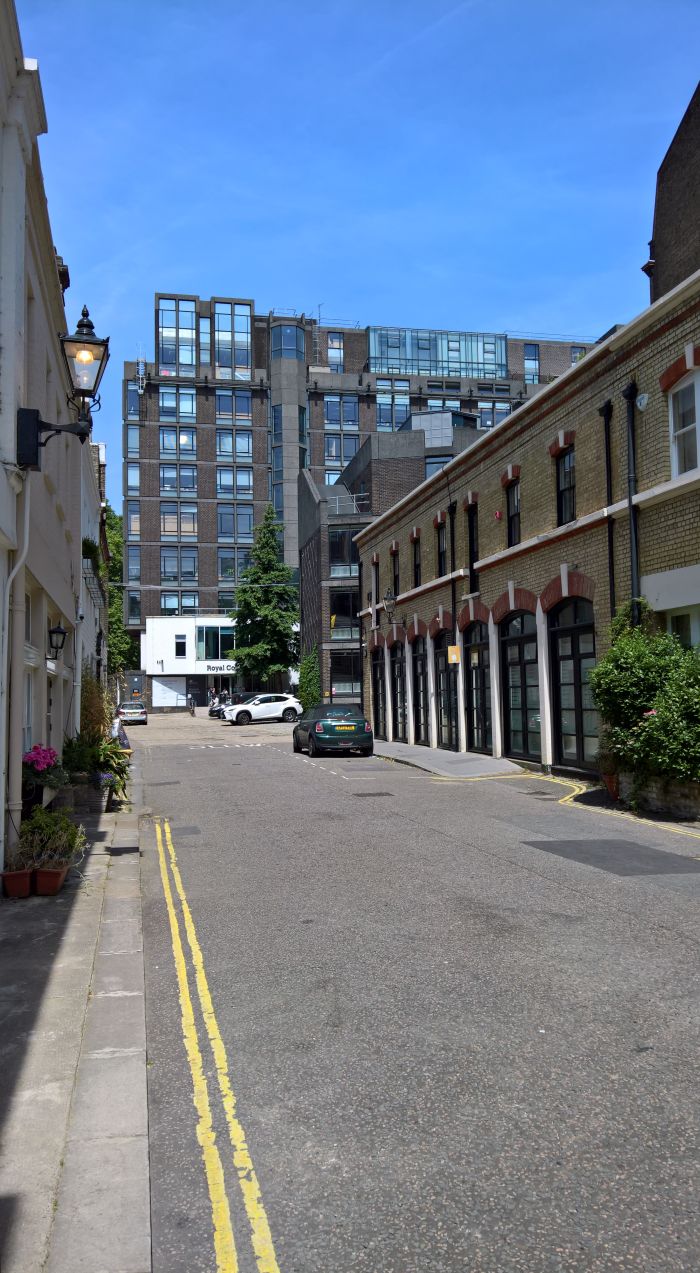 Founded in 1837 as the original Government Design School with a mandate to support and promote the UK’s fledgling industry, we discussed the background to the Royal College of Art, RCA, and its journey to its current status in our 2017 #campustour post, where we also, as indicated above, expressed our, let’s say, unease, at the direction many of the graduation projects were proposing society should take.

In many regards forewarned it came as no surprise that the 2018 RCA graduation exhibition also featured a goodly number of projects which happily proposed delivering us over wholesale to the infallibility of autonomous smart systems and benevolence of algorithms; however, there were also signs that a higher proportion of students had been more discerning in the consultation of their socio-cultural atlases, arguably had consulted an atlas rather than relying on a smart sat-nav to plan society’s future journey.

Not, we hasten to add, that we are principally against smart autonomous systems or the application of new technology to provide future solutions, far from it, we’re huge fans, for example, of Mr Watt’s latest thinking on the steam engine and see enormous potential in it; but the question is one of where, when and how one applies technology, and in terms of that we’d argue that we all have a lot to learn, as a species we’re not half as clever as we like to think we are and really should analyse and extrapolate the mistakes made in generations past before we repeat them in generations future. That many of the questions posed by RCA graduates in context of our relationship to emerging digital technology are also posed, in different forms, by graduates elsewhere, we’ll save the wider discussion of such for a post-#campustour post.

We know it could be construed that we are including Subsonic here to demonstrate that we aren’t Luddites, that’s a risk we’re prepared to take; and in any case we believe even Luddites would approve of Subsonic, helping, as it could, to maintain food security without taking work away from anyone.

Phytoplasma are plant pathogens and are (generally) spread by sap feeding insects, including leafhoppers. Owing to the biology and modus operandi of phytoplasma, control is primarily focussed on the use of insecticides against the vectors, including leafhoppers, and thereby a control strategy that requires accurate information as to the current risk; something which currently relies on visually checking crops for signs of, for example, leafhoppers.

Through the development of a piezoelectric sensor, a sensor which detects electrical charge generated by biomechanical stress, coupled to a machine learning algorithm, Filippo allows farmers to “listen” to their crops, and to “hear” when there is a risk of a phytoplasma infection, thereby allowing for timeous, targeted remedial action.

While still a long way from being proven as a meaningful pest control strategy, Subsonic does very neatly demonstrate how new technology can be used to augment good husbandry in improving pest control/crop production, while particularly pleasing is that Filippo has made his sensor available as an open source project meaning that it can be used by farmers globally, and, potentially, adapted to allow farmers to listen out for other, locally relevant, pathogens/pests. 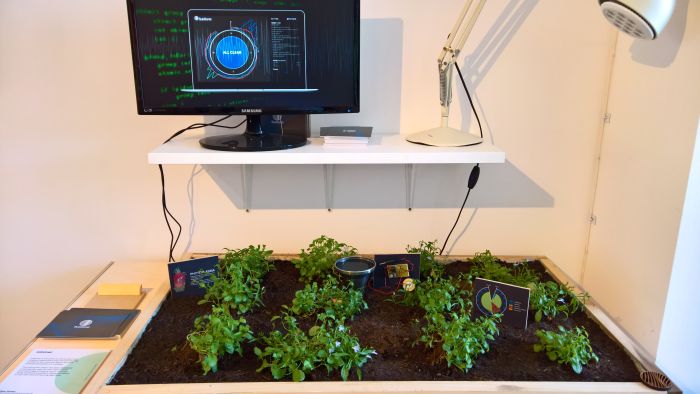 Subsonic by Filippo Sanzeni, as seen at the 2018 Royal College of Art London Graduate Show

As we’ve oft noted in these pages, there are a great many everyday objects out there which everyone knows aren’t optimally designed, which hinder as much as help, or formally are just plain ugly, yet which no-one feels motivated to improve: arguably because the objects aren’t “sexy” enough. Take, for example, the shopping trolley so popularly associated with senior citizens heading to/from the shops. Who would re-imagine such a shopping trolley when there are cars, coffee machines and beard oil packaging to re-imagine? Megan Wang, that’s who. And with Zeroll she has produced a very interesting position, and one that neatly tackles many of the problems of the conventional shopping trolley.

Proposing an object whose “basket” can be positioned both vertically and horizontally, Zeroll can be used in place of a conventional shopping trolley while out shopping, thus allowing for a realistic assessment of how much you are buying/avoiding over-filling and subsequently lowered down for the journey home – the interior dividing walls maintaining the necessary order during transport. And then once you get home it can be flipped up again and thereby brought into a more convenient position for putting things away: certainly more useful than the blindly, hopefully, feeling around in the bottom for the jar of peanut butter and only finding the squashed peach, that conventional shopping trolley’s offer.

Key for us with such an object is going to be, we would imagine, the ease with which a fully laden basket can be brought into, and secured, in the upright position. A principle market for such an object is the senior citizen, and if flipping it up is too awkward or requires a strength associated with a viking, then it has no function; however, assuming, as we do, that Megan has carefully considered such, then as we say a most interesting proposal. 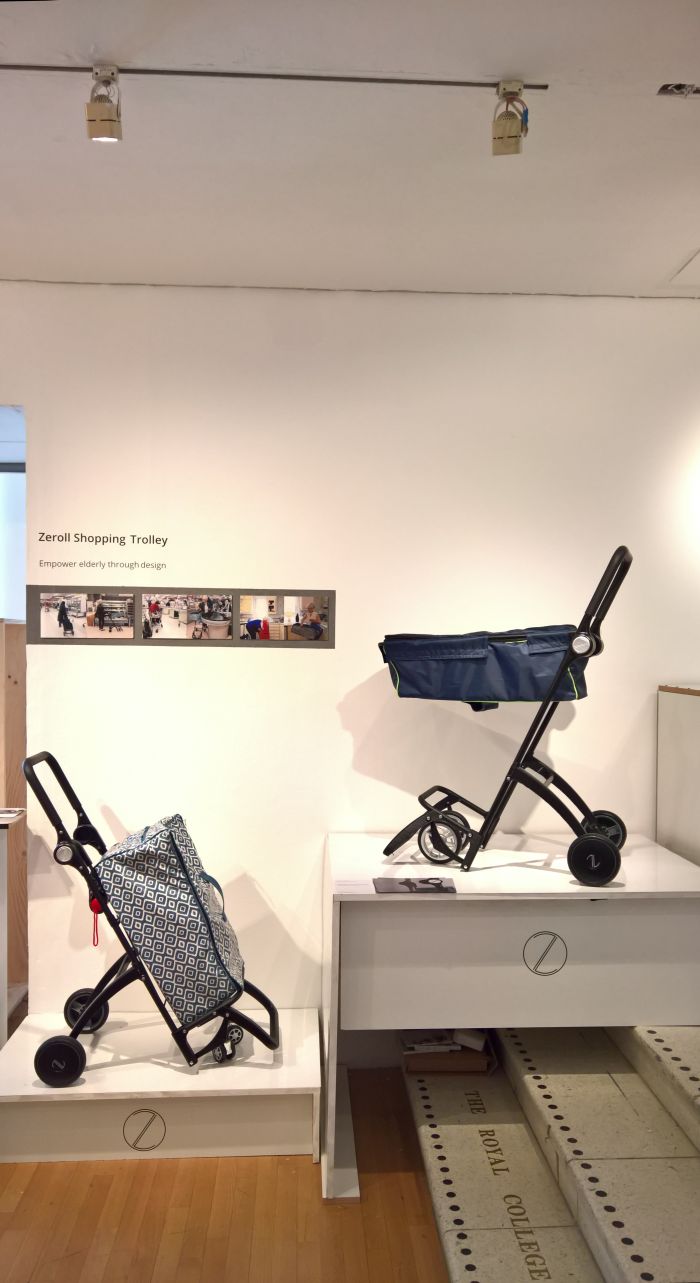 One of the more ridiculous fads of our age is without question the addition of active charcoal to food; not just in itself the most ridiculous nonsense, but proof, were it needed, that as a species our ability to independently judge information remains as under-evolved as ever, and we as gullible as ever. And that the inventiveness of the snake oil sellers remains as imaginative and as cynical as ever.

Which isn’t to say active charcoal isn’t without its useful properties, it has many: including properties which can also be beneficial in conjunction with food, not least its relatively high absorptivity.

Adapting the traditional Japanese Yakisugi wood scorching principle, a process often used in construction to waterproof and protect wood, Yung-Chuan Lin has created a series of food storage containers where the active charcoal surfaces have a positive effect on that food which come into their vicinity, including a fruit bowl which absorbs ethylene, the simple alkene that promotes ripening of fruit, and thereby delaying the ripening process and extending the lifetime of fruit; or storage vessels for dry foods where the moisture absorption through the active charcoal helps reduce the likelihood of spoiling/growth of pathogens.

Admittedly we only have Yung-Chuan Lin’s word for it that that objects function as promised, see however absolutely no reason to doubt him; and while, yes, the aesthetics of the objects created is still very much open for discussion, in all other aspects, as an application of a natural principle it stands as a most appealing proposal. Appetising one could say…..

Full details on the Royal College of Art London can be found at www.rca.ac.uk 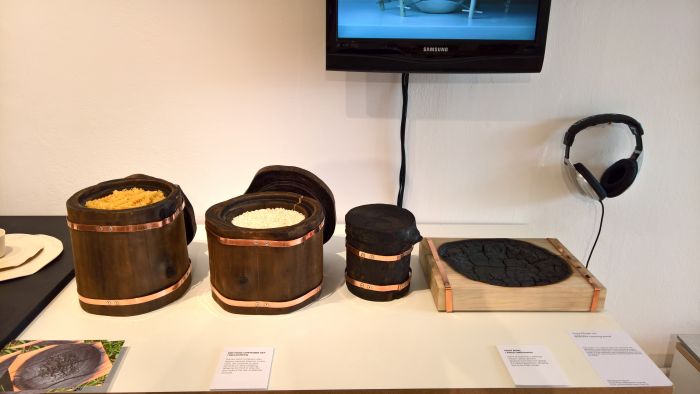