Much like the doubled “A” in Aachen the FH Aachen Design Department double up their summer exhibitions, presenting two: a Semester exhibition featuring the numerous undergraduate projects of the months past, and a Diploma graduation exhibition. Two summer exhibitions separated by a week. Thereby necessitating two visits to Aachen.

And never ones to knowingly refuse an invitation…… or indeed fail to understand the relevance of the double in Aachen.

As noted in context of our 2017 #campustour visit to Aachen, the FH Aachen was formally established in 1971, the Design Department however tracing its history back to 1904, that we don’t believe that to have changed since last year, we refer you to last year’s post for more information; what has changed since our 2017 #campustour visit to Aachen is the personnel, Prof. Clemens Stübner having succeeded Prof. Helmut Jakobs as Dean of the Design Department, the focus of which remains Communication and Product Design. 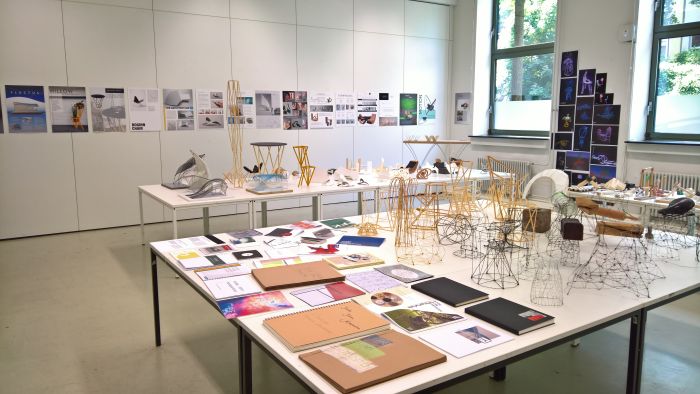 Starting, if you will, from the very basics, the Product Design section of the FH Aachen’s Summer Semester exhibition presented the results of classes from the introductory Design Fundamentals Course including Colour Form Composition which featured projects such as  Folding > Molding which involved creating a folded form that should serve as a mo(u)ld or Sketching Basics, which focussed on, well, the basics of sketching, and a course complimented by one in Life Drawing, making, as far as we are aware, Aachen one of the few design schools which have remained true to the study of the nude. Not the only one. But certainly one of few.

With Design for Neom students were challenged to develop a project for the new Saudi Arabian city of Neom, if you will to develop a project for a city with no established structures, a blank canvas, while the Material and Productions Technology classes by and with Prof Clemens Stübner included the projects Sports Assistance which posed the question “Which piece of equipment could support, simplify, revolutionise a sport?” The answers of many of the students, somewhat inevitably, involving a digital application, and Essen Ergonomics which considered ergonomics in context of eating/food preparation and which amongst other projects saw Thore Blumenbecker develop a self-contained system for preparing, rolling and packaging kebabs. Arguably also for preparing, rolling and packaging falafel. A, in our opinion, much more appetising consideration.

Keeping it technical, in the class Industrial Product Design, IPD, with Prof Christian Scholz students were asked to critically analyse, and subsequently optimise, an existing object, a task that essentially involved taking an object apart and considering each piece, each function, each relationship, while, and moving up to students in the 6th semester, Present-Past-Future placed the factor “time” at the centre of the process and asked the students to realise a project set in the present, past or future. Which most of them did, and which resulted in some interesting proposals including Beach Lifeguard by David Abshof, a rescue drone for beaches complete with an inflatable rescue ring for those in trouble in the sea, and an autonomous tram concept by Johannes Döring which took the visuals of the horse drawn double decker trolley bus of our youth and developed a very nicely considered project which not only featured an intelligent organisation of the internal space but also a stroke of genius in terms of how passengers board and disembark. Yes the autonomous aspect caused and causes us a few headaches, less on account of the autonomy as on the lack of a contact person for passengers, the future needn’t be impersonal. But more on that in a later post. 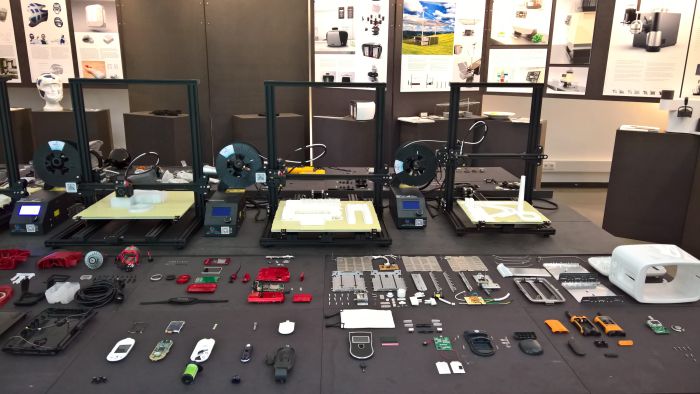 Amongst the varied Communication Design projects on display, Fundamentals of Typography concerned itself with that with which you would, hopefully, imagine; Universal Knowledge – Make the complex clear considered the many questions posed in the presentation of, at times, highly complex scientific research; and Fotoradar by and with Prof. Lorenz Gaiser allowed for a theoretical discourse on the contemporary value of photography, and thereby of a medium which, arguably, more than any other has not only helped allow for information dissemination in the past couple of centuries and thereby contributed to the development, but also revolutionised classic, fine, art; but whose relevance in the future looks much less essential.

Returning briefly, if relevantly, to Product Design, in the 4th-6th semester class Table + Ware the students were asked to develop less a Table and more the Ware: an “add on” which extended a tables functionality. And which resulted in a number of interesting, if not necessarily, 100%, convincing solutions, something perhaps best encapsulated by a re-imagining of the familiar Eiermann table frame in a width adjustable version, and which sounds a lot more interesting than the practicality would imply. However, and as ever, such semester projects are not about developing market ready products, but about the students developing their understanding of and position on design, what they produce is largely, thoroughly?, irrelevant, how they got there, what they learned on the way, and how they employ the experiences of that journey in their next project is what is important

And indeed how that then flows into their final graduation project. 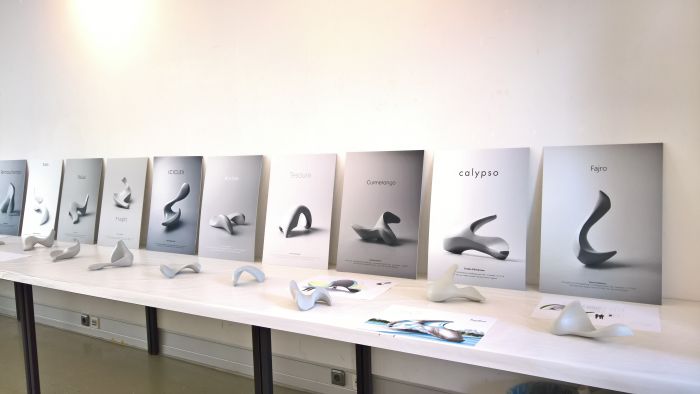 A week after the undergraduates it was the turn of the new, fresh, graduates, who presented a wide variety of projects including a first aid kit concept from André Groffy which through a series of simple yes/no questions guides and supports you until professional help arrives; keeping it medical, Valentina Gross re-imagined the dentist chair with a concept allowing for, in addition to improved patient security and comfort, improvements in dentist’s workflows; while with Moto Mark Geisel develop a (partially) height adjustable table, and although we admittedly didn’t really get what he was doing formally, our ears pricked up when the discussion turned to it providing for a high table section for a more relaxed atmosphere at social gatherings, for example, offering sitting and standing options at a family gathering with individuals of mixed age/fitness. We admittedly didn’t pay enough attention to understand for which space Mark intended his table to be used, specifically if he meant it for indoors or out. One space makes a lot more sense to us than the other…….

Similarly there were/are a few questions open for us in context of Vita by Vera Firmbach: a bed that can be freely converted in its width, for example, from a single to double and back, and back, and back, etc. While we understand it as a bed for life concept, and very much approve of it as such, for us the nature of the extension system, akin in many regards to the extendable dining table, somehow strikes us as being an awful lot of technology, mechanism and material for something that is, in all probability, only going to be used on a couple of occasions during its/your lifetime. Certainly less often than an extendable dining table. Even considering it from the perspective of an extendable guest bed in a spare room didn’t really help, if you’ve got room for a double bed in your spare room, you put a double bed in. And then it occurred to us! Maybe Vera hasn’t developed an extendable bed-bed for life, maybe she has developed an extendable…..

Full details on the FH Aachen can be found at www.fh-aachen.de

And all 2018 FH Aachen design department graduation projects can be found at https://diploma-ac.de 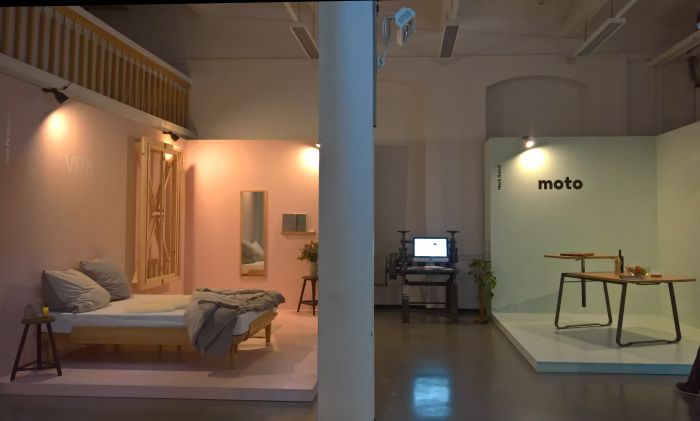 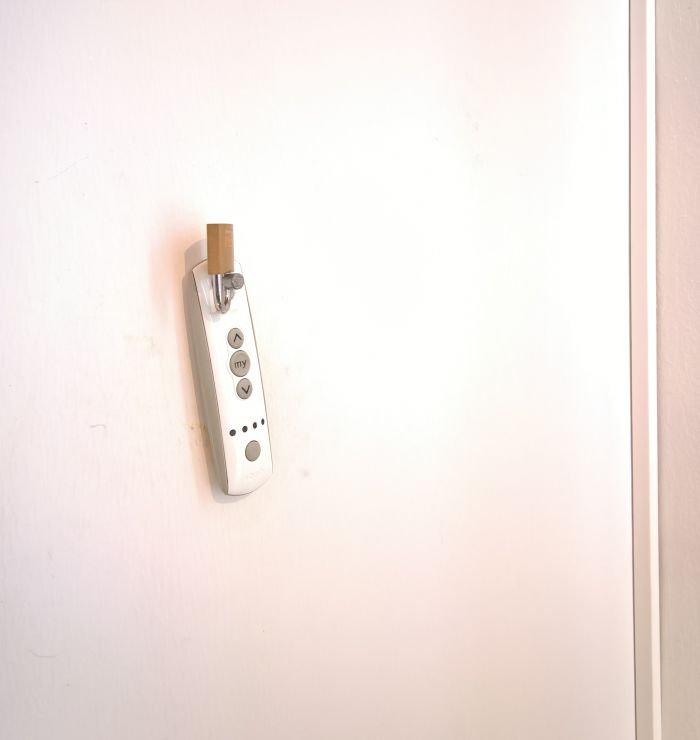 The remote control for the FH Aachen sun blinds. The question is, is it a nice piece of design thinking, or an appeal for a new storage solution……..? 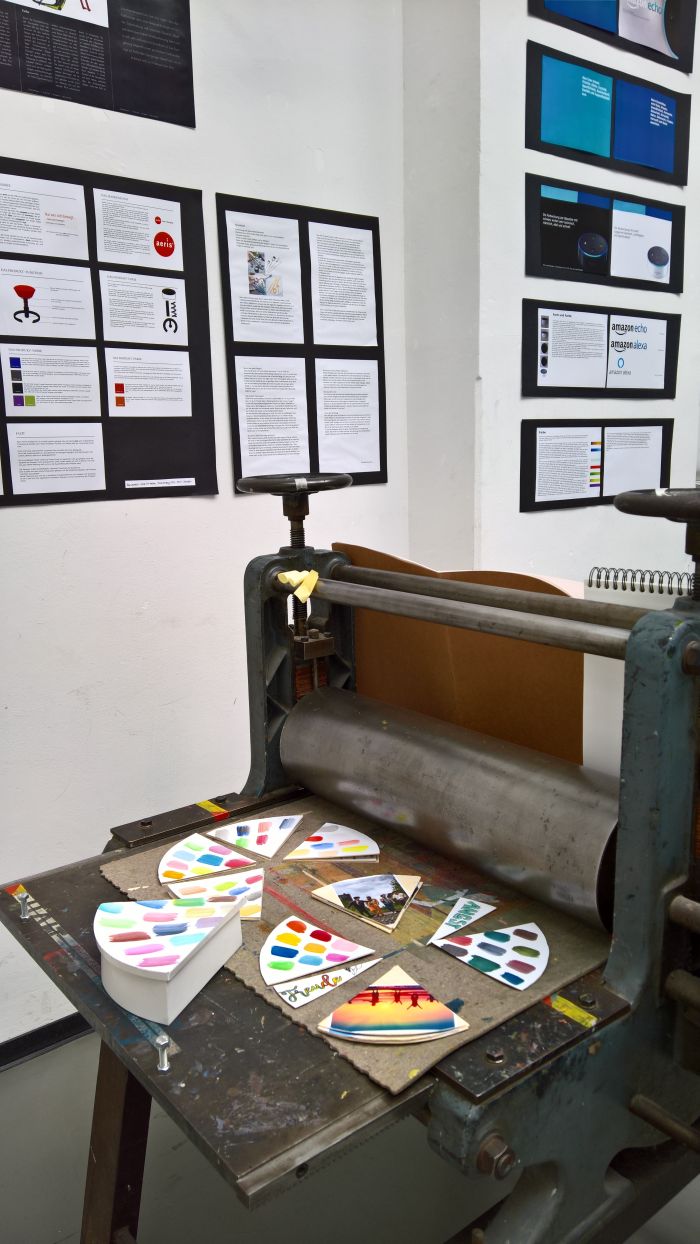 Colour Pizza! That’s the way to get students interested in colour theory….