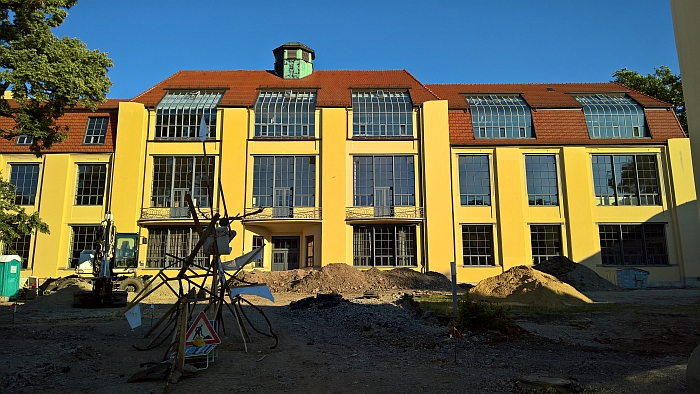 Although the “Bauhaus” in “Bauhaus University Weimar” only arrived in 1995, the institution can trace its story back to, and beyond, the fabled Gropius school, something we discussed in context of Summaery 2017. Our jokes about the weather at Summaery not being very, go back even further, and in 2018 were obviously superfluous. It was über-summaery.

Presenting the familiar mix of semester and graduation projects from across the university’s wide range of programmes, our principle focus was the design projects, principle but not exclusive focus.

Bauhaus Weimar famously never had an architecture department, Bauhaus University Weimar does and among the myriad projects presented in context of Summaery 2018 were, Eurometropole Frankfurt am Main which considered alternative options for empty office space in Frankfurt; In my back yard?! which explored how/if public participation could be positively employed in context of the development of the so-called Kleinen Grasbrook area of Hamburg; Potsdam Speicherstadt which although we understood as being a well meant attempt to develop a, relatively, pollution free quarter in Potsdam, in reality, and on account of its original thesis, would only make the situation for those looking for affordable accommodation in Potsdam even more intolerable, and sustainable urban planning must always be as socially responsible as environmentally; while, and keeping it pleasingly old-skool, there was a presentation of the results of a trip to Brno where the students sketched buildings and thereby searched for the vestiges of functionalism. 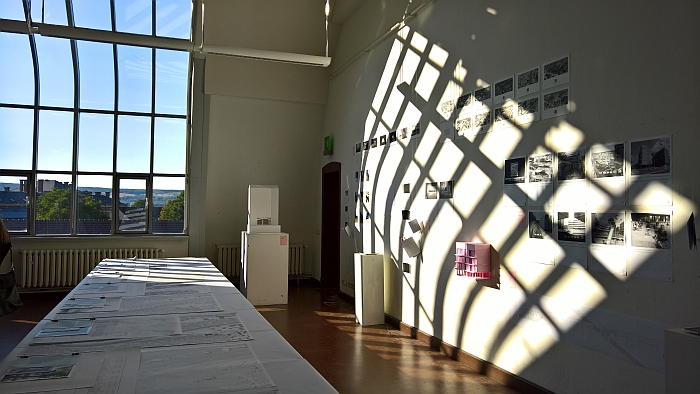 An architecture atelier, as seen at Summaery 2018, Bauhaus University Weimar

In terms of design classes, R/E/Motions Tools and Toys in Reaction to Parkinson, did pretty much what it said on the label, saw the students develop tools and toys for Parkinson disease sufferers, and that critically in conjunction and cooperation with sufferers and their families; Care-robot searched for digital solutions in healthcare, solutions which both help patients but also support healthcare professionals; Rotoblock saw the participating students experiment with rotational moulding processes and materials, a class less about the results as about understanding processes and materials; while in the class Hochstapler, the focus was self-presentation skills and the development of a portfolio to promote the student, their capabilities and talents. And thereby a nice bit of careers advice as part of the study programme. Assuming that is the project name [Hochstapler = Impostor] wasn’t also indicative of the content.

Under the guidance of Prof Gerrit Babtist and Meike Langer Cope? asked students to first study a company/brand and subsequently design a product for them. Which is, in effect, exactly what a great many of the students will aim to do upon graduating; and is one of those tasks which sounds easier than it is, ask the head of any company’s design department and their faces will contort with pain as they recount just how regularly they receive proposals which are completely foreign to everything the company is, does, stands for and wants to be.

We’re not saying all the projects realised in context of Cope? necessarily achieved the stated aim, not that we are qualified to do such even if we did, only the companies involved can do that; however, amongst those realised we were particularly taken by hang On, a bowl concept developed by Clara Ellguth and Justus Hilfenhaus for porcelain manufacturer KAHLA and which re-imagined the company’s own Magic Grip silicon coating process to create an object that can not only be safely stacked but safely carried and held by those with a limited grab/grasp function; with Pendler Urs Winandy and Stephanie Vatamanu developed a tool bag for Finnish garden equipment manufacturer Fiskars, which attaches to a standard garden pail and thus provides for the convenient storage and transportation of hand tools and accessories when doing regular garden chores; while for Stuttgart based lighting manufacturer Nimbus Eileen Krüger developed tatendrang which features a series of removable lamps/torches which all hang on the same charging station, and when doing so exist as a pendant lamp. A pendant lamp that, logically, can be used as four separate task/desk/torch lamps.

Although we’re admittedly not a 100% sure of the practicality, would you take a lamp from the pendant? When? Why? Really? You sure? We did really like the concept of a divisible lamp. Not only does it strike us as an eminently sensible solution but there is also something poetically romantic about the idea, reminiscent of back in the day when all who sat around a fire would light their individual candles before retiring for the night, each taking their own part of the fire, and thus the warmth of the evening’s companionship to bed.

tatendrang by Eileen Krüger, realised in context of Cope?, as seen at Summaery 2018, Bauhaus University Weimar

An established class in the Bauhaus University Weimar syllabus, and an established favourite in our Summaery visits, is the second semester “design a desk” class, this year called We Work, run under the leadership/supervision of Uli Budde and Susan Paduch and partnered, as ever, by the annual, “design an office accessory” class, this year titled Toolbox II, led by Timm Burkhardt, Niklas Hamann and Meike Langer and requiring the development of an interactive object.

One of the joys of the Weimar Desk Project is the unending variety of new desk design concepts the students develop every year, an unending variety which every year serves to underscore for us just how little variation, imagination and consideration there is amongst commercially available desks, and a tradition pleasingly continued by We Work.

Among the projects which particularly caught our attention were, D27 by Hannes Hüttner, Rodrigo Alonso Pereyra & Till Hintesorf which featured a nice height-adjustment “mechanism”, even if we were less taken by the visuals, but that aside a very pleasing piece of work. And as ever, it’s a student project, it’s about developing an understanding of design, a relationship to form, materials, functionalities, gaining experience with materials, processes, technology, not about creating an object that should be market ready in a week. Far less about keeping us happy.

Similarly presenting an interesting concept, if one in need of further development and refinement was XI von FAF. Developed by Friedrich Gerlach, Anna Vock, & Franca Bloch and sounding more like a champion showjumper than a desk, XI von FAF is/was a collapsible table that allows for an enclosed workspace offering light from either above or below i.e. as an illuminated desk or as light table for those tasks which require such. As we say, as presented in Weimar it was a little ungainly, but the idea would certainly appear to be one worth pursuing.

And then there was Oliver, a small robotic character developed by Giwon Min, Mariya Kaplunenko & Michael Mahle and who slowly droops and fades as the air quality in the office decreases, as it invariably does over time. And thereby reminding you to open a window and let in some fresh air.

Full details on the Bauhaus-University Weimar can be found at www.uni-weimar.de 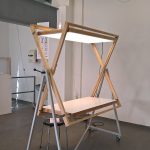 D27 by Hannes Hüttner, Rodrigo Alonso Pereyra Till Hintesorf, realised in context of We work, as seen at Summaery 2018, Bauhaus University Weimar 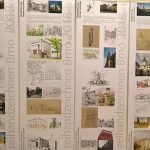 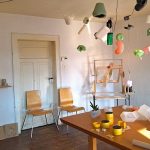 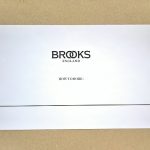 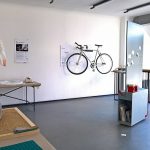 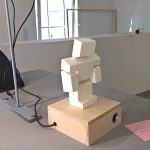