“Ghost” by Philippe Starck for Kartell

One of the classic rules of furniture design is the product must look good, must look appealing.

What, however, if you can’t see the product.

If it doesn’t have a visual presence.

That would make no sense. 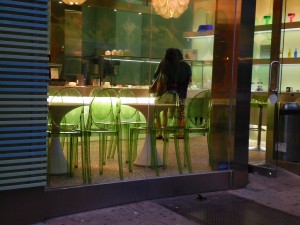 Victoria Ghost by Philippe Starck for Kartell in New York

Which is probably why it took Philippe Starck to come up with the “Ghost” range of chairs and stools for Kartell.

Very few other designers could create a range of chairs that regularly vanish in the light.

Starck’s motivation was of course somewhat different. With his Louis Ghost, Victoria Ghost and Charles Ghost for Kartell, Philippe Starck is playing with the “ghosts” of long since dead design styles. Awakening the past in a modern setting where it no longer plays a role yet is not forgotten.

Which is all well and good. That’s his job. 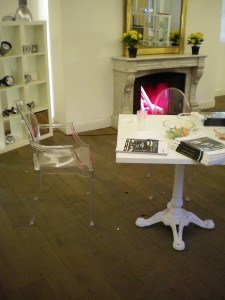 Louis Ghost Chairs in Milan... seen the one behind the table? Didn't think so

What he’s also achieved is a line of furniture that belong to most distinctive of the last 20 years.

Louis Ghost is a play on the period furniture from time of Louis XV’s regin, moving forward a century the Charles Ghost is reminiscent of the stools of 19th century Europe and with Victoria Ghost Starck completes his tour through three centuries of European furniture design.

The real magic of the series, however, is only really apparent – or better put not apparent – when the chairs are in use. With their transparent plastic frames the chairs genuinely merge in with the background allowing other objects in a room to take precedence.

It is truly an affect that needs to be seen to be appreciated, the photographs added here can only offer an idea of the beauty that is Ghost series.