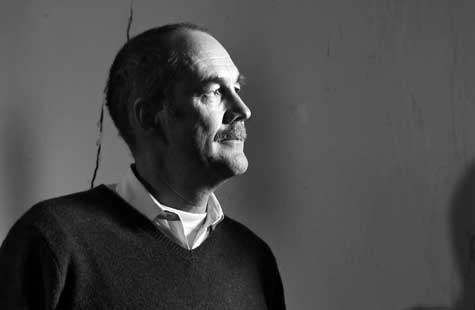 At Fuori Salone Milano 2011 we helped Moormann construct their stand. And of course took the opportunity to chew the fat a little with company founder and eponym Nils Holger Moormann.

Variously described as being an autodidact, pioneer or provocateur, for us Nils Holger Moormann is simply pleasant company and the guarantee of well considered and soundly opinionated discussion.

In the course of the Milan interview we covered the new products, the current state of the furniture industry and, appropriately enough given what awaits us in October, the point of trade fairs.

smow: As a furniture producer does one have to go to trade fairs and, in particular, is it worth coming to Milan?

Nils Holger Moormann: That is always the central question; however, for us Milan is always worth it because we have a lot of export business and so here we can meet those customers who we otherwise perhaps wouldn’t get a chance to meet in the course of the year. The main problem is that it is very difficult to get a space in Milan, and we only have this tiny stand. Every year we fight to get a bigger stand, and every year we don’t ….

smow: … but you’ve never considered moving from the fair grounds into the city?

Nils Holger Moormann: … no not really because interesting as Milan is, it is currently on the verge of lunacy, with so many fringe events that a normal person can’t see them all. And when we undertake such a project then with heart and soul. Every detail here has been considered in great detail; it looks very simple, but isn’t, and every detail needs to be perfect. And then to potentially only have very few visitors would be tragic, but here at the fair you have the guarantee that both visitors and the international press will be here.

smow: How much Nils Holger Moormann exists in such a stand. Do you take a personal interest, or …

Nils Holger Moormann: Every year we have the same problem; Finding a theme. Personally I think it is especially important to tell a good story that links the stand with the company. And developing this story is the most difficult part because it must have some relation to us, it can’t just be “show” And, this year as with every year we were absolutely convinced that we would be given a larger stand, and planned the concept accordingly. And then came the information – no once again the smaller. And that was a shock.

And so we needed a new idea and that did indeed come from me. I was inspired by the fact that everyone is only interested in new products – which I find interesting but also idiotic, because furniture needs time. It must be refined and gradually perfected. Furniture design involves a lot of thought and consideration. And with this quick, quick, new, new one has the risk that we become like the fashion industry with two, three, four collections per year. And that can’t be. And so we thought OK we can play along and so we’re presenting 12 new products here but the majority sadly can’t be seen because they are from 2028 or “undefined future” or so. What I like is to create unfamiliar situations where visitors stare, aren’t sure if its serious or not. And that for me is just as important as good products. 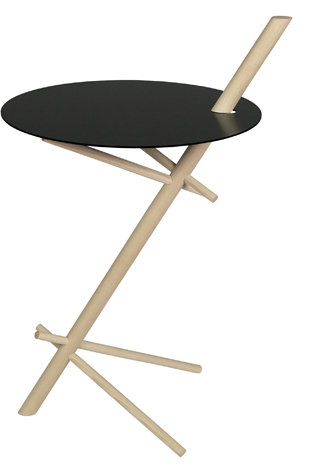 smow: But there are 2 real new products.

Nils Holger Moormann: Yes, or at least one and a half. We have a small side table called Minimato which was relatively simple to bring to production, and so our principle focus now is a, for us, very unconventional piece. For the past couple of years I wanted to do more sheet metal furniture. Most people have probably forgotten but 15 years ago we basically only made sheet metal furniture. I find the material very interesting and we  were introduced to a piece called Pressed Chair by Harry Thaler, a young Südtiroler who studied in London, that fascinates not only me but the whole company – although we all know that the risk involved is gargantuan. There is so much technical engineering involved that one is working at the limits.

But we all want it to work and we have organised a network of eccentrics to help us; because to work on such project you can’t think within normal constraints. Its not a contract where we can go to someone and say “Make us the chair” rather you need someone who says “It’ll never work, but we can for a beer if you want!” And money isn’t involved, just lots of socialising, and then one starts trying to gently talk them round. And eventually they also become infected by the project. And that makes it a lot more fun when one approaches such things in an unconventional way rather than simply taking some money and paying a producer. With us its like an insane mountaineering expedition. But that’s the fun.

smow: And are you personally regularly in the workshop….

Nils Holger Moormann: …permanently. It’s the only option. The person working on it is friend of mine who has a very, very small company but a wonderful network of specialists who help out.  And it is with all things that you do because you are fascinated and interested by, it becomes more like a hobby and then you start working through the night because you don’t realise any more what time it is.

Which is the difference to when you only work for money, where you eventually start wanting to do other things.

But until now its all gone very well, but let’s wait and see! I actually phoned him yesterday because I got a little nervous. There’s always new problems! Its a bit like climbing Mount Everest with two crates of beer and no oxygen…. 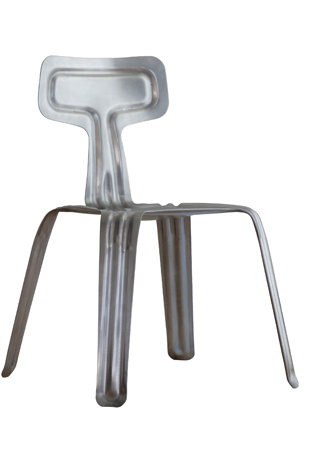 smow: … but that’s probably easier because then you don’t notice you’ve no oxygen…

Nils Holger Moormann:.. That could be true.

smow: And when the risk doesn’t pay off…

Nils Holger Moormann: Then so be it! I believe that one of the reasons that furniture firms are so boring today is because they only do “show” and let the world know how wonderful, colourful and crazy they are. And here we find the chair, absolutely, indisputably … basic. For us it’s important. There’s no “show”

And yes there is a risk that you fail. But that’s the kick.

If everybody could produce such a chair, it wouldn’t be any fun!

And I don’t want to give up is this feeling of undertaking an unconventional tour, with unconventional methods, but then still arriving at our destination.

But in this case we are as certain as we can be that we’ll make it.