Back in the 80s there was nothing Hannibal Smith liked more than when a plan came together.

Obviously we don’t know such a feeling, but nothing gets us reaching for a hand-rolled Havana and grinning somewhat malevolently as much as when Lady Luck binds the various strands of our Blog together to give the impression of a coherent plan.

Back at Norm=Form, Timo de Rijk argued that all modern design is simply a recreation of older standards – because the public expect a product to have a specific form. And designers give them that. Albeit with their own signature and interpretation.

Ettore Sottsass and his Memphis Group may have tried to rectify this with objects such as the Carlton Cabinet; but ultimately it remains true.

The exhibition Global Village at the WAGNER:WERK Museum in Vienna explores the theme a little further by placing modern design in the context of “traditional” objects from non-European civilizations.

Some of the comparisons are just uncanny.

And so we see that the Eames Stools are simply an extrapolation of handcrafted stools from Burkina Faso or that Karim Rashid’s lounger Surf is actually from East Java.

Obviously no-one is accusing anyone of copying. What Global Village however does is to wonderfully underline just how dependent designers are on established and well practiced forms.

The spade has existed since time immemorial. All we can do is change the materials and ergonomics.

We do feel they have over-extended themselves by comparing Nils Holger Moormann‘s Easy Reader to a children’s wheelbarrow from Indonesia.  But the visual comparison is very good.

Global Village at WAGNER:WERK Museum runs until November 4th. Full details can be found at www.ottowagner.com 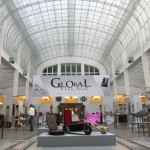 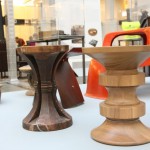 Eames Stools next to a stool from Burkina Faso 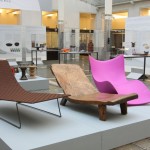 Surf by Karim Rashid next to a wooden lounger from Indonesia 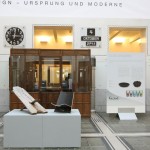 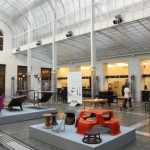 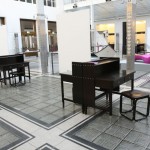 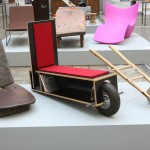 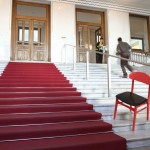