As already stated, DMY Berlin 2012 is hosting not only the Designpreis der Bundesrepublik Deutschland 2012 exhibition but also the jury meeting to decide which entries should be nominated – and as such go forward to the short list from which the winners will be selected.

The  jury have done their work and until June 10th we all have the chance to not only view all submitted entries. But also disagree with the jury’s decisions.

The first thing to say is that the exhibition does resemble in certain respects a car park – the “air side” of the hangar being taken up by a continuous string of automobiles and motorbikes. German engineering in its most universally recognisable form.

Yet judging from what else is on show Germany isn’t too sluggish when it comes to producing taps and shower heads either.

But it’s not all high end industrial design.

There are some wonderful examples of graphic design, small, playful items intended to make our daily life that little bit easier. And a stuffed felt rhino and elephant called Ronny and Peggy.

The problem however with displaying shower heads, notebooks and stuffed animals in a space such as Tempelhof, is that they are tiny.

The exhibition hanger isn’t particularly well filled as it is, and the large number of smaller objects means that if one isn’t careful one runs the risk of drowning in space.

Understandably keen as the organisers are to use the whole hangar – they may have been better advised to have only used 75% or so of the room. Or maybe they are just expecting an awful lot of visitors.

The section that most interested us was of course the furniture; and there we must say there wasn’t a great deal that caught our attention. Bao by EOOS for Walter Knoll still rocks our boat and, in our opinion, has rightly been nominated.

What for us was also missing from the exhibition was the entries from younger design studios and producers.

Part of the DMY concept for the Designpreis is and was that through the reduced entry price more younger studios and producers should be motivated to participate.

We didn’t see them. Or at least not any where near as many as one would have expected.

It was admittedly quite dark in the hangar when we were there.

But we still managed to see all the products from Germany’s industrial elite.

But not those from the next generation.

This may however not be DMY’s fault alone. The condition that all submissions must have been awarded a prize by a regional design award of course means that if the young studios aren’t entering – and winning – design competitions in Bavaria, Sachsen or Saarland; then entry to the Bundespreis can be free. They still couldn’t enter.

And so maybe the time is rife to take a closer look at the regional contests and make a sober judgment as to how fair and democratic they are.

Design and innovation are after all a major economic factor in Germany.

As we say the hall did seem quite empty.

While this may have been to do with the vast scale of the hangar, we feel to suggest this as the main reason would be over generous to the organisers.

We’ve not seen any official figures as to how many entries were submitted, but we’ve got unofficial figures that seem confirmed by a quick look around the exhibition. And they all suggest the number of received entries is well below the expected.

As in “well below”

But as we say we’ve not seen any official figures. Once we have we’ll be better placed to assess and analyse if expectations were reached. And if not, why not.

The success or failure of a design prize however isn’t decided by the number of entries alone  – but by the quality of the winners that come out.

If the winners reflect the true quality of a country’s design output – then job done.

We’ll all be better placed to judge when the winners are announced in October.

And until Sunday June 10th we all have the chance to make a first impression. 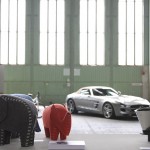 Felt meets steel. Ronny, Peggy and a car. sums up the range of objects in the Designpreis der Bundesrepublik Deutschland 2012 exhibition very nicely. 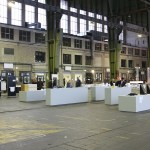 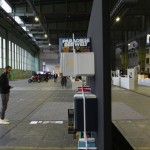 A bookcase by students from FH Mainz 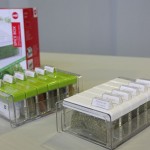 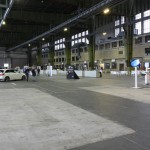 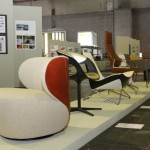