One of the real joys of the first few days of DMY Berlin 2012 has been catching up with Stephan Schulz.

Not just because Stephan is without question the product designer we know with the healthiest attitude to the whole circus, and as such after a few minutes in his company you no longer fear the workload that lies ahead.

But also because we’d been looking forward to seeing his new Domestic Landscape collection. A collection that as the press material so promisingly begins “… transports soil into the domestic space”

When we do that our mums get really cross. Stephan has found a civilised, useful even, way to do it.

We knew that a couple of years ago Stephan was working on a similar project involving loam and assumed that Domestic Landscape arose from that work.

It didn’t. Or at least not directly.

Rather it was developed in the context of a new project funded by the Kunststiftung Sachsen-Anhalt, but obviously entails elements of the experience Stephan gathered in his earlier project.

The central feature of Domestic Landscape is the Climate Wall. A modular system comprising a wooden frame on which one can hang the earth “tiles”

Or not. You can also leave sections open.

The tiles are created from a mixture of earth, straw and old newspaper, and after mixing and forming are dried – not  baked.

According to Stephan this is important as it imparts the system its climate influencing character. Keeps it natural. Earthy, if you like.

Optional metal elements allow for the inclusion of storage/shelving space and as modular system one can build and rebuild it as required.

As a system we can well imagine the Climate Wall working excellently in an office or a retail environment. For all as room divider. Not just owing to its appearance and the the climate influencing aspects of the system, but also through the  – almost inevitable if not formally tested – acoustic effects.

Lumps is the only word that occurs to us for the floor “features”. Uses however don’t.

Without wanting to sound disrespectful, the lamp looks like the most commercially feasible element of the collection, reflecting nicely the furniture industry’s current infatuation with furniture that is “at one with nature” – yet in a form more accessible and sellable than the Climate Wall.

But as a feature in a modern, open office space. Absolutely delightful.

More information on the Domestic Landscape collection can be found at: www.studio-stephanschulz.com 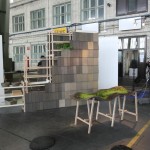 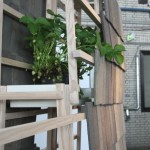 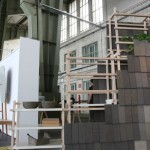 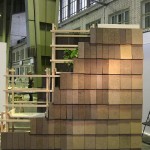