Normally we don’t pay any heed to design contest exhibitions at design fairs. It just doesn’t feel right, looking at them being in our jaundiced minds akin to reading those appalling advertorial “special supplements” that the print industry have fallen back on for survival.

However at DMY Berlin 2013 something drew our attention to the exhibition for the adream 2012 competition. A pink brick to be precise.
And we’re mighty glad it did.

Although “adream 2012” sounds like some truly horrendous hippy inspired term it is actually, more or less, an abbreviation of “Architecture and Design Using Renewable and Ecological Materials” – a less catchy but altogether more correct title.

Organised by the German State of Thüringen and the French Region Picardie, adream aims to encourage greater use of renewable and/or ecological materials in design and architecture by giving a platform to some of the best contemporary European projects in such areas.

Although there is a very generous prize for the winners, for us the more valuable aspect of the event is the travelling exhibition of the winning and the nominated –  a tour that started in Erfurt in November 2012 and had moved over Frankfurt, Paris and Amiens before arriving at DMY Berlin.

The project that initially caught our attention is called Brike by Roubaix based Pierrick Taillard. And somewhat remarkably isn’t among the winners. Essentially Brike is a series of house bricks with in-built additional functionality, for example, a small planting tray for flora, holes that insects can use for shelter and structures to encourage and support birds. An idea that is as simple as it is obvious. Just delightful.

Among the other projects we were very taken with Polar Light by Arturo Erbsman, Woolshade by Nikola Znaor and Towards the Sun by Francesca Perricone & Roberta Rotondo.

Having experience ourselves the joys of winter in the Arctic Circle we can very well relate to Polar Light. Resembling some sort of IKEA dirty laundry sack the principle behind Polar Light is as ingenious as it is poetic. Falling snow collects on the outside of the structure, melts slightly, refreezes. During the day the solar LED collects sunlight – and at night release its luminescence through the crystalline structure of the snow: An environmentally unobtrusive and inoffensive light that shines every night afresh and anew. Which is just the most delightful thought.

Woolshade and Towards the Sun meanwhile take two very different approaches to dealing with sunlight falling on buildings.

Developed by Vienna based architecture student Nikola Znaor Woolshade is a series of wool-based umbrellas that open and close as required thus providing a natural, non-invasive cooling for building fronts. And thus interiors.

Towards the Sun looks in all honesty like some contraption from How to Live in a Flat and aims to harness the sun’s energy for modern flat dwellers. Developed by Rome based architects Francesca Perricone & Roberta Rotondo, Towards the Sun is a modular system that can be attached balcony-style onto house facades and used to, for example, grow plants, collect rainwater and generate electricity. In addition to providing a central location for combining numerous functions, Towards the Sun also helps regulate the amount of sun directly hitting a house and so control the internal temperatures.

Aside from the above projects a special mention must also go to VVIO by Eva Marguerre & Marcel Besau aka Studio Besau-Marguerre, because after, in our opinion, presenting a very disappointing project in Milan it was wonderful to see further evidence of just what they are capable off. Their VIVO project involved developing a nettle fibre bioplastic composite that can be produced cheaply and locally and subsequently used as the basis for constructing, for example, furniture. As any fool know the future of design is new materials and VIVO looks like a very important contribution. Looking forward to seeing where they take it.

And a special mention must also go to the nomination for Speiseschrank by Bauhaus Uni Weimar graduate Nadin Jahn. Because it was inspired genius when we first saw it, still is and really should be in production by now.

#diogene as we believe the kids say today…..

In the coming six months the adream 2012 exhibition will be on show in Weimar and Brussels. If you get the chance to view it, you really should.

A few impressions from the presentation at DMY Berlin 2013 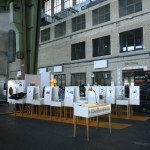 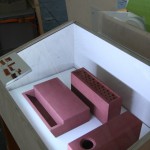 adream 2012: Towards the Sun by Francesca Perricone & Roberta Rotondo. As seen at DMY Berlin 2013 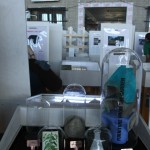 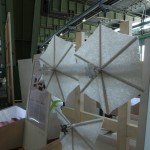 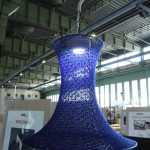