That is how one opens an event.

Sadly it appears that noone from the Bundespreis Ecodesign and/or the German Federal Environment Ministry saw Blur at the 2013 Berlin Festival.

And so rather than an inspiring sonic boom, the Bundespreis Ecodesign 2013 Awards ceremony in Berlin opened….. by firstly inviting all nominated companies/individuals onto the stage.

One at a time.

Awards ceremonies are by their very nature tedious, prosaic events, especially ones such as the Bundespreis Ecodesign where the winners are known in advance.

As such the organisers aim should always be to get the whole thing over with as quickly as possible.

Not drrrraaaaaaaaaaaaag it out unnecessarily through some well meant if misguided sense of fairness.

Aside from the monotony generated, the chosen presentation form was unfortunate as the Bundespreis Ecodesign deserves better, being as it is one of the more interesting and important contemporary design awards.

As we noted in our misinformed piece about the Cradle to Cradle category at the 2013 International Marianne Brandt Contest, sustainability should be a self-explanatory part of contemporary design’s remit.

The days of design being simply about creating attractive forms are long gone. And anyone who doesn’t understand that really should be looking for a new job.

The problem of course is that marketing departments have understood the reality; but rather than encouraging their paymasters to develop products and projects in a more sustainable way, they have developed ever more sophisticated methods to greenwash projects.

And the global design prize industry happily plays along by tagging ever more “sustainable” categories onto their awards, categories where sustainable is understood as a helpful marketing term rather than a strictly defined concept.

The Bundespreis Ecodesign is different.

Initiated in 2012 by the German Federal Environment Ministry and the German Environment Agency the Bundespreis Ecodesign looks to recognise and reward environmentally and socially responsible design.

To that end the organisers, in cooperation with the Berlin based International Design Centre, have developed a “criteria matrix”. Examining aspects such as, for example, material, energy consumption, social responsibility or advertising in terms of pre-production, production, distribution, use and end life, the matrix is not only intended to help the jury assess differing projects, but can also be used by the design industry as a guide to assess projects before they begin.

Preferably in conjunction with Max Borka’s appeal that “designers should, before anything else, also stop designing if is clear that the result can only be crap”1

All of which means that while many of the nominated projects are consumables, they are more often than not consumables that also seek solutions to social problems.

Which is what, for us, makes the Bundespreis Ecodesign so interesting and important. That and the fact that the winners aren’t penalised by the “licensing charges” that make the design award industry so profitable.

Among the 2013 nominations, for example, was the Revolver personal wind turbine from frog design. An umbrella sized object, Revolver, according to frog design, we haven’t seen or tested it, can produce with even the slightest breeze enough electricity to power a laptop, mobile telephone or lamp. On the one hand that is obviously something of use when, for example, camping – or alternatively in solving problems of electricity supply in rural areas and/or urban slums. Thoughts which of course brings us back to Lightopia at the Vitra Design Museum and the question of light poverty and how to achieve a fairer distribution of light.

An equal attempt to bring light to the darker corners of our planet is the Solarkiosk by Berlin based GRAFT architects, a project that we first came across as part of the exhibition “Aus allen Richtungen. Positionen junger Architekten im BDA“. A modular mobile solar powered kiosk, the advantage of Solarkiosk is not only that it can be used anywhere the sun shines, but much more that it is intended as being a source of light for neighbourhoods without power. In addition Solarkiosk can be used by locals to charge up, for example, mobile telephones thus aiding communication.

In addition we were very taken with cubile, an electricity-free food storage system by Anne Ziegler from the Hochschule Wismar;  Luftpaket, a multi-use envelope developed by Julia Oberndörfer from the Fachhochschule Potsdam; and Integrated Urban Morphologies by Florian Krampe and Christopher Voss from Stuttgart University, which is probably best described as a computer based system designed to help architects and urban planners optimise planning processes. 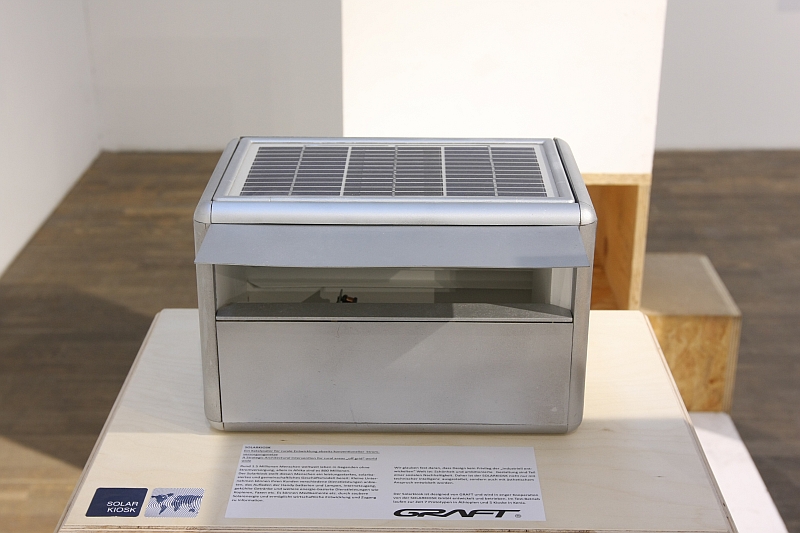 During her introductory speech Secretary of State Ursula Heinen-Esser noted that the consumption of environmentally friendlier products is not in itself an answer to our social and environmental ills, non-consumption is the only answer.

That we all stop consuming is however unlikely, and so environmentally friendly products remain the most important social crutch we have.

And that means awards such as the Bundespreis Ecodesign will, hopefully, become increasingly relevant in terms of providing a guide as to who is being truly innovative thus allowing consumers to differentiate between responsible products/services and those who are just investing heavily in greenwash.