“She was my woman. As she deceived me I watched and went out of my mind”

Presenting some 300 objects, around a third of them lamps, lights or other illumination objects, Lightopia is an exploration of light, not lights. The difference is important.

One is a physical object. The other is an intangible matter. The designer’s job is transforming the latter into the former.

In his opening notes Vitra Design Museum Chef Curator Mateo Kries underscored the difference and noted both the cultural importance of light through the ages and also the increasing importance, relevance and standing of light design, thanks in part, though obviously not exclusively, to the EU’s decision to ban conventional light bulbs.

And such thoughts form the core of Lightopia. Organised into four sections the exhibition opens with “Living in Lightopia” which presents light in contemporary cultural and social contexts, including light pollution, the history of the light bulb, new lighting technology and new uses for light beyond illumination. The second section then presents “Icons of lighting design”, an exploration of 100 years of lighting design, starting with works by Gerrit T. Rietveld and Wilhelm Wagenfeld before moving over, almost, all the famous classics of the genre, including, George Carwardine’s 1932 Anglepoise, Tizio by Richard Sapper, Artichoke by Poul Henningsen and various works by Verner Panton before reaching 85 Lamps by Rody Graumans through droog.

Having set the scene the second half of Lightopia explores light in more detail.  “Colour, Space, Motion” explores light’s role in helping defining our world – positive and negative  – before in the final section “Light for tomorrow” contemporary experimental, future orientated lighting design projects are presented.

Throughout the exhibition the displayed objects are complimented by documents, videos and photographs which help set the works in context of time and place. 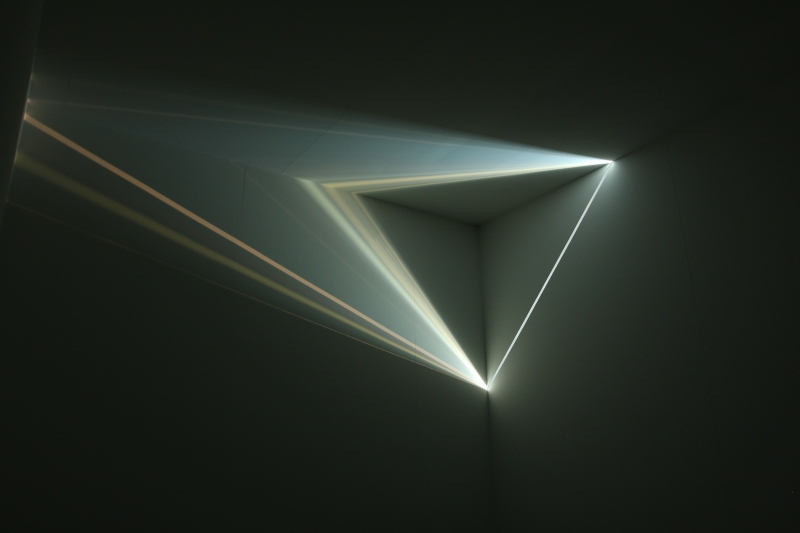 Slant by Chris Fraser. As seen at the Vitra Design Museum, Lightopia

“I could see that girl was no good for me. But I was lost like a slave that no man could free “

Aside from the wealth of objects on display, the real joy of Lightopia is that it isn’t just objects on display. They are a means to an end. A way to make accessible a subject that is as abstract as it is ubiquitous. Whereas in the past lighting design was generally about creating aesthetic, playful, functional, innovative objects for home and office the future of lighting design lies, as with all design genres, elsewhere.

And Lightopia is brave enough to tackle this “elsewhere”

Sadly for us this exploration of where the future of lighting design lies was one of the weaker parts of the exhibition. Laid out as a sort of laboratory on the upper floor of the Vitra Design Museum, the “Light for tomorrow” section was for us a little too busy. Too much. One could say not so well illuminated. It was for us unclear exactly what we were supposed to take from all the objects, projects and ideas on display: other than lots of contemporary designers are doing a lot of clever things with lights. Which was nice to see, but just as we say, for us a little to crowded. An overflowing cup as it were.

And much as we adore projects such as Fragile Future by Lonneke Gordijn & Ralph Nauta or Vase by Ronan and Erwan Bouroullec, we really couldn’t understand why they were on display. Maybe we missed something, we often do, but for us the organisers would have been better advised to have reduced the number of modern applications covered. And to have covered them in more depth. Less famously being more.

“I felt the knife in my hand and she laughed no more. My, my, my Delilah. Why, why, why Delilah “

The central question, as so often, is what future role will and should designers play?

Light installations or the playful use of new materials in expensive design gallery projects and the like are all well and good, but don’t help those living in urban slums or isolated rural locations with no ready, reliable access to the electricity required to enable a standard of domestic lighting necessary for a meaningful, humane existence.

One of the objects on display is the “Light-Space Modulator” by László Moholy-Nagy. In 1944 Moholy-Nagy wrote: “To be a designer means not only to be a sensible manipulator of techniques, an analyst of the present production processes, but also to accept the social obligations connected with it. Thus design is dependent not alone on function, science and technological processes, but upon social implications as well.”1

And just as “Light-Space Modulator” makes no real positive contribution to social development, we didn’t see very much in Lightopia which showed exactly how contemporary designers are harnessing the potential of our modern technological and scientific understanding to either increase access to light or to encourage more responsible use of light. The social implications.

Chromosaturation by Carlos Cruz-Diez. As seen at the Vitra Design Museum, Lightopia

The Smiths famously sang “There is a light that never goes out” and while such a lamp would unquestionably be a prime example of really, really bad design and so would rightly have no place in such an exhibition, the fact that light will always be required, and thus won’t/can’t be extinguished, is inescapable. Lightopia doesn’t, can’t provide all the answers as to how our future needs can or should be met. But then it doesn’t set out to. What it sets out to do is to present an exploration of the story of light and for all the role of design in the development of our contemporary relationship to and utilization of light, how lighting design has influenced modern living spaces and how it could influence such in the future, and the curators have achieved that in a well considered, well curated and very well realised show. If, as we say, at times one is a little swamped and overwhelmed.

And so with winter approaching should you find yourself in or near Weil am Rhein a visit to the Vitra Design Museum might just be the thing you need to lift your spirits.

As we were viewing the exhibition we were aware of a continual background soundtrack courtesy of Tom Jones. Wherever we went, Tom Jones was in the vacinity. We were unsure why until we reached what for most visitors is the middle of the exhibition; but, given the curious and unique way we view such shows is for us the end.
On the ground floor the organisers have reconstructed Cesare Casati, Emanuele Ponzio and Gino Marotta’s Bolzano nightclub “Il Grifoncino” as it was in 1968. Complete with music of the day. Three whole tunes: Delilah, Lady Madonna by the Beatles and that Italian tune everyone knows, no one can name and which sounds a bit like Eviva España.  Three songs on constant loop. Nice idea: we’re just glad we don’t have to spend all day every day working in the Vitra Design Museum exhibition space. The two hours that we were there being enough to lodge Tiger Tom’s account of a jealousy fuelled murder in our ever softening brains…..

We just felt duty bound to bring you a full impression of the exhibition experience.

Lightopia can be viewed at the Vitra Design Museum, Weil am Rhein until Sunday March 16th 2014.

Full details can be found at www.design-museum.de 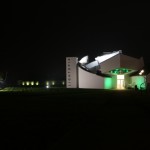 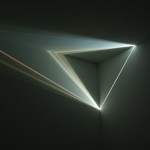 Slant by Chris Fraser. As seen at the Vitra Design Museum, Lightopia 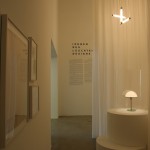 Light-Space Modulator László by Moholy-Nagy. As seen at the Vitra Design Museum, Lightopia 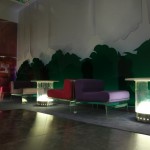 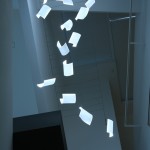 Artichoke by Poul Henningsen. As seen at the Vitra Design Museum, Lightopia 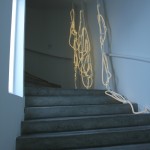 Ropes by Christian Haas. As seen at the Vitra Design Museum, Lightopia 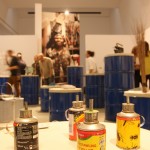 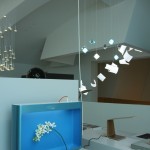 Vase by Ronan and Erwan Bouroullec. As seen at the Vitra Design Museum, Lightopia 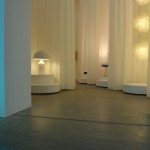 Works by Verner Panton and Vico Magistretti. As seen at the Vitra Design Museum, Lightopia 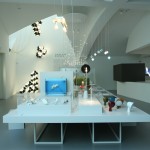 The Light for tomorrow section of Lightopia at the Vitra Design Museum, Lightopia 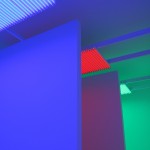 Chromosaturation by Carlos Cruz-Diez. As seen at the Vitra Design Museum, Lightopia

Temporali by Alberto Garutti and a map of global light usage. As seen at the Vitra Design Museum, Lightopia 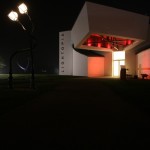