Eames Alchemy. Or how Charles and Ray Eames turned steel into plastic…..

“The new Eames plastic chair is a dream fulfilled”1

While one can, should, accuse the Walker Art Centre Minneapolis of being somewhat hyperbolic in their 1950 guide to “Useful Objects”, there is no arguing with the fact that with their family of moulded fibreglass chairs Charles and Ray Eames took furniture design into uncharted territory.

Or as Peter Smithson writes, “Before Eames no chairs (of the modern canon) were many coloured, or really light in weight, or not fundamentally rectangular in plan (ie the chairs of Rietveld, Stam, Breuer, Le Corbusier, Mies, Aalto)”2

Yet, and following the Walker Art Centre’s curve, as with all fulfilled dreams, the story of the Eames plastic chairs is one that so nearly never was……..

Buoyed by his success, together with Eero Saarinen, in the 1940 MoMA Organic Design in Home Furnishings competition Charles Eames continued throughout the early 1940s with his research into moulding plywood, research that received a financial boost in 1942 when he won a commission to supply his moulded plywood splints and stretchers to the US Navy. The “furniture breakthrough” came in 1944 when Charles and Ray Eames released their plywood childrens furniture collection of chairs, tables, desks and stools, before in 1946 Charles Eames had the honour of being the subject of the first ever solo furniture exhibition at the MoMA New York.3 “New Furniture Designed by Charles Eames” included, amongst other works, the DCM and DCW plywood chairs, models that Herman Miller very quickly took into production. And equally as quickly transformed into commercially successes.

By the late 1940s the Eames plywood chairs had established themselves as a steady family and a successful project and Charles and Ray decided to turn their attention to new materials.

The opportunity came in 1948 when the Eames’ were invited to enter the MoMA’s International Competition for Low-Cost Furniture Design.

Launched in January 1948 to find new forms of furniture “capable of being adapted to a variety of uses in today’s small homes”4 the competition not only invited individual designers to submit entries but also selected six design-research teams who were presented with a $5000 grant to assist their work.

Which all sounds a little unfair, but……

Charles and Ray Eames were paired with a team from the University of California at Los Angeles (UCLA) and together they developed a series of stamped steel chairs, metal stamping being in Charles Eames opinion “the technique synonymous with mass production in this country, yet “acceptable” furniture in this material is noticeably absent…”5

A situation that stimulated a man such as Charles Eames.

The stamped steel chairs were awarded joint second prize in the competition; however, as fate would have it, the production costs of the stamped metal chairs proved to be much higher than expected. And the production process more complicated and involved.

And so in order to truly match the aims of the competition, and Charles and Ray Eames’ desire to get “the best to the greatest number of people for the least”,6 an alternative was needed.

And so with Herman Miller signed up as producer, Charles and Ray Eames began a cooperation with the California based Zenith Plastics focussed on developing fibreglass versions of the stamped metal designs.

The process began with what we know today as the armchair shell because, according to Neuhart et al, this represented the “greatest tooling challenge”.7

By all accounts the process went relatively quickly; however, producing the forms in fibreglass involved necessary changes to the original “metal” chair’s design, something which Charles Eames was happy to do if it ensured achieving his aim of producing affordable, everyday furniture for the masses. A situation which reminds us of Eero Saarinen’s former assistant Cesar Pelli’s comment on one of the differences between Saarinen and Charles Eames “He [Saarinen] was worried about form, Eames was worried about how to produce. When Eames had to sacrifice style to keep the technology coherent, he would; Eero would have no hesitation about sacrificing the technology to keep the style and form clean”8

It is therefore fortunate that Charles Eames and not Eero Saarinen was responsible for the project, and in 1950 the Eames plastic armchair was released by Herman Miller. And in the same year became part of the MoMA permanent collection. 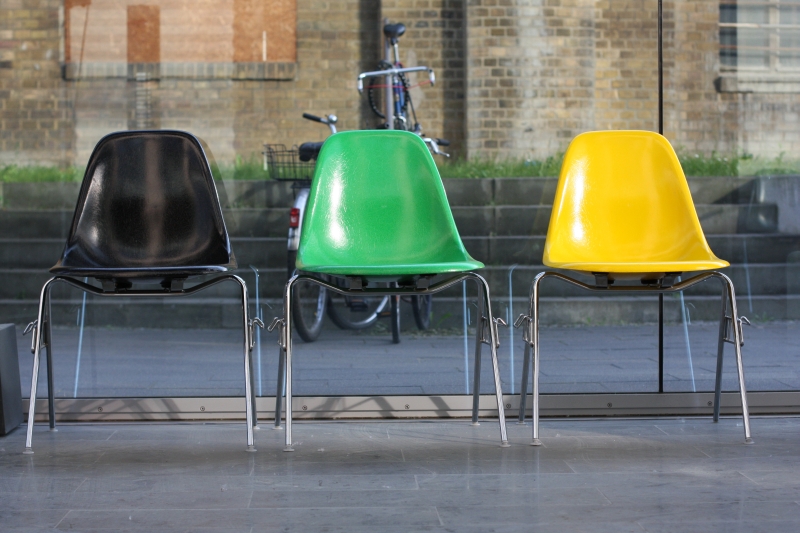 The DSX plastic side chair by Charles and Ray Eames

Although originally available in just three colours – elephant hide grey, beige or parchment – from the very beginning the choice of a wide variety of bases was an important part of the product concept. In addition to the metal DAX, wood DAW, rod DAR swivel PACC and rocking RAR bases we know today there was also a version with a single pedestal, a low lounge version – a version which if you ask us must have a place in our contemporary tablet and smartphone centred society – and the most charming bar stool/atelier height wooden legged version which, aside from the fact that the extra long wooden legs give the chair an elegance and balance that the DAW can’t come close too emulating, …. swivels.

The Eames plastic side chair shell was released a year later in the complementary DSX, DSW, DSR, PSCC and RSR versions, and the first upholstered plastic chairs appeared in 1953.

And on a side note, the RAR was initially only produced until 1968, however according to Neuhart et al until 1984 all new parents amongst the Herman Miller staff received a RAR as a gift.9 Which is just the most delightful gesture.

The Eames plastic armchair DAW and side chair DSW from Vitra, here in the Wallraf-Richartz-Museum Cologne

With its general ease of production and distribution coupled to the fact that it was released into a market where “the boom in civic and office buildings in the 50s [had] created a need for lightweight comfortable seating that could take abuse”10, the Eames plastic chair family very quickly became even more successful than the plywood family and was to go on to become one of Herman Miller’s best ever selling product lines.

In the 1990s a decision was made to switch from fibreglass to polypropylene, largely on account of the greater ease with which polypropylene can be recycled; however, in principle the Eames plastic family remains the same inspiring product line it always was.

A dream still being dreamed, to paraphrase the Walker Arts Centre.

And the nomenclature of the Eames plastic chair family? An explanation can be found in our 2009 post DSR, RAR, DAW, ETC… The plastic chairs of Charles and Ray Eames. 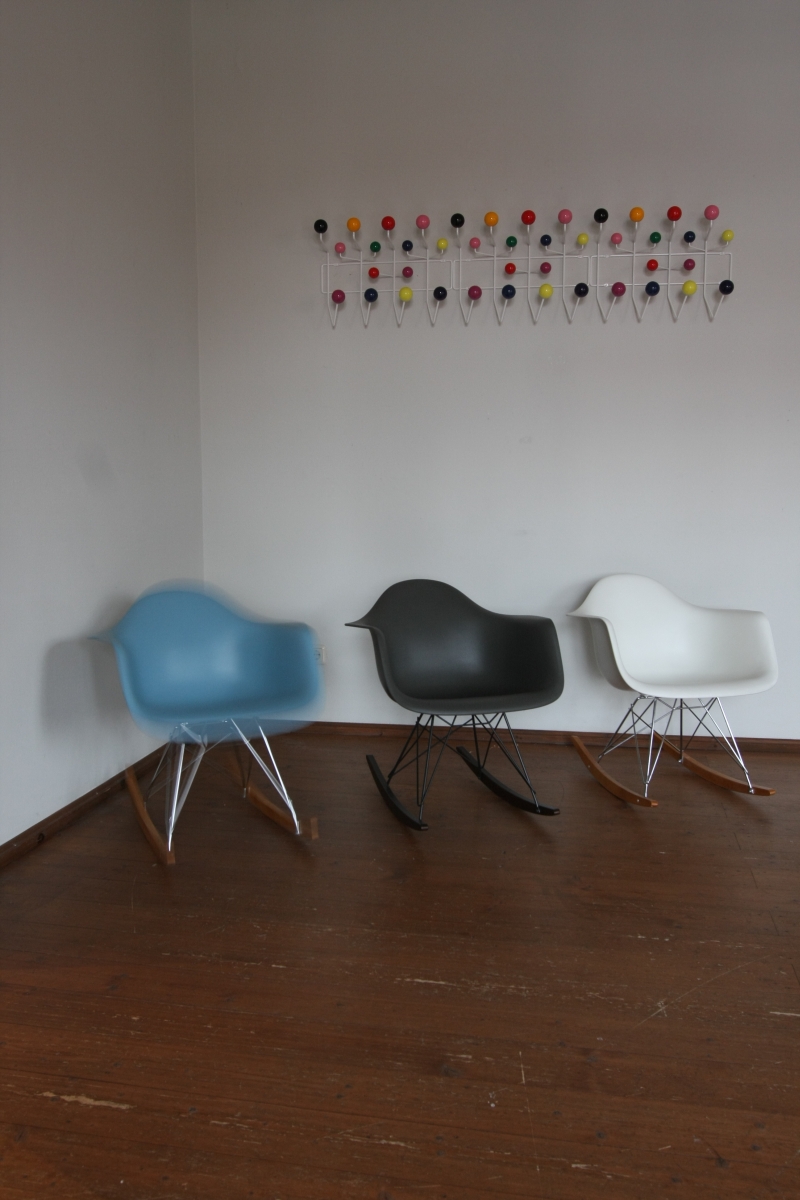 The spirit of Charles and Ray Eames relaxes in a RAR…. at Eames by Vitra, Wasserschloss Klaffenbach Chemnitz 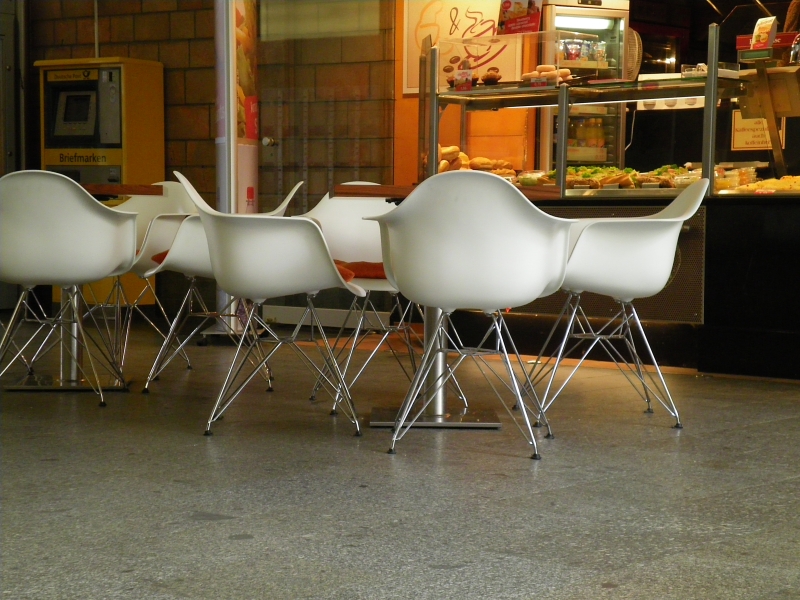 The Vitra DAR plastic armchair by Charles and Ray Eames.

2. Smithson, Peter  (1966) Just a few chairs and a house: an essay on the Eames-aesthetic. Architectural Design, September 1966

5. John Neuhart, Marilyn Neuhart and Ray Eames (1989) Eames design: the work of the Office of Charles and Ray Eames. Ernst and Sohn, Berlin