Our favourite Portuguese designer TM Rui Alves is making his IMM Cologne début this year, with a new prototype under his own name and an old smow blog favourite being launched by Danish manufacturer Menu.

Premièred as “Tailor Sofa” at Salone Satellite 2013 and now renamed Lounge Sofa by Menu the work initially caught our attention on account of being a “deliciously effortlessly reduced down piece [which] combines a turned wooden frame with a pressed felt seat to create a sort of simplified domestic sinkhole in which to vanish of an evening. Or Sunday morning.”

In addition to the good news that Rui has found a producer for such a competent piece of design what is particularly pleasing is the Menu have kept the delicate lines and sympathetic construction of Rui’s original, have however replaced the pressed felt covers with a high quality, highly durable Kvadrat fabrics thus adding luxury to the comfort.

As we noted in 2013 the sofa has and had a very Scandinavian charm and so it should be no surprise that a Danish producer has picked it up. Although in conversation with Rui in Cologne we did learn that a major Italian manufacturer was also interested: and that despite losing out that same Italian producer will also be dropping by to view Rui’s latest prototype, an armchair provisionally titled Bridge.

Crafted from wood and featuring deliberately overproportioned upholstered seat and back rest, Bridge isn’t as instantly accessible as much of Rui’s work. Making use of several familiar, standard, furniture and architectural forms the result is an object which formally goes its own way without being arrogant or overly oppressive. When viewing furniture one, automatically, attempts to create references to other products, eras or designers, largely to help you anchor your deliberations. With Bridge, there is very little to refer to, maybe a little from some of the more overblown works by Wegner or Juhl, but in the end we settled on deciding that there is something early 1980s about it, a sort of “discos over, where do we go now?” feel.

If we did have one criticism it would be that for us the frame could do with being a touch thinner, a little less industrial. And we’re still not 100% certain about the connection between armrests and frame.

But otherwise, and as ever, a competently realised project which once again underscores both Rui Alves’ technical abilities and his understanding of wood as a material for furniture construction. 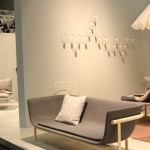 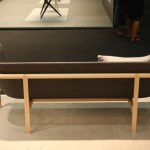 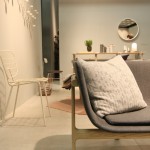 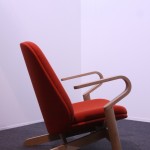 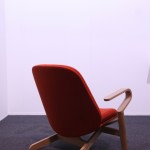 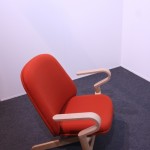