The biggest, and certainly highest budget, new architecture and design exhibition open in May 2015 is without question the World Expo 2015 in Milan which begins on May 1st. Staged under the central theme of “Feeding the Planet, Energy for Life” Expo Milan 2015 will feature presentations from some 140 countries in an equal or greater number of pavilions by some of the world’s leading architectural practices, and promises to present an unrivalled exploration of future strategies for feeding an ever expanding global population. And hopefully generate sufficient extra income for the Milanese hotel community so that come next April they can say: you know what, let’s make our rooms affordable during Milan Design Week. Let’s stop milking the furniture and design industry and let’s charge realistic prices and so make the whole event affordable and so accessible to a wider audience. Milan is a friendly city, let’s demonstrate that!

But we can dream. And dream we do.

And so ignoring Milan, five genuinely promising sounding architecture and design exhibitions opening in May 2015.

Under the title “Thingness” the CID – Grand-Hornu is hosting the first ever Jasper Morrison retrospective.

Two points arise from that sentence.

Really! No one has ever hosted a Jasper Morrison retrospective? We can certainly name a couple of museums who probably should have.

And so why Belgium?

Don’t get us wrong the exhibition sounds fantastic, promising as it does a chronological tour through 35 years of Jasper Morrison’s creative output across a range of fields and disciplines, and thus would appear to offer an excellent opportunity to understand the developments in style and philosophy as Jasper Morrison has evolved from the breathless student leaving the first Memphis exhibition in Milan to the suave, reserved, Grand Master of reserved European design he is today.

CID – Grand-Hornu is a very distinguished institution with a long record of producing very interesting shows. But given the closer associations Morrison has with other countries and regions…….

…….. although as we have often repeated, Belgium is currently one of the more interesting countries in terms of furniture design. And so maybe it makes sense that a designer such as Jasper Morrison feels drawn to the country. 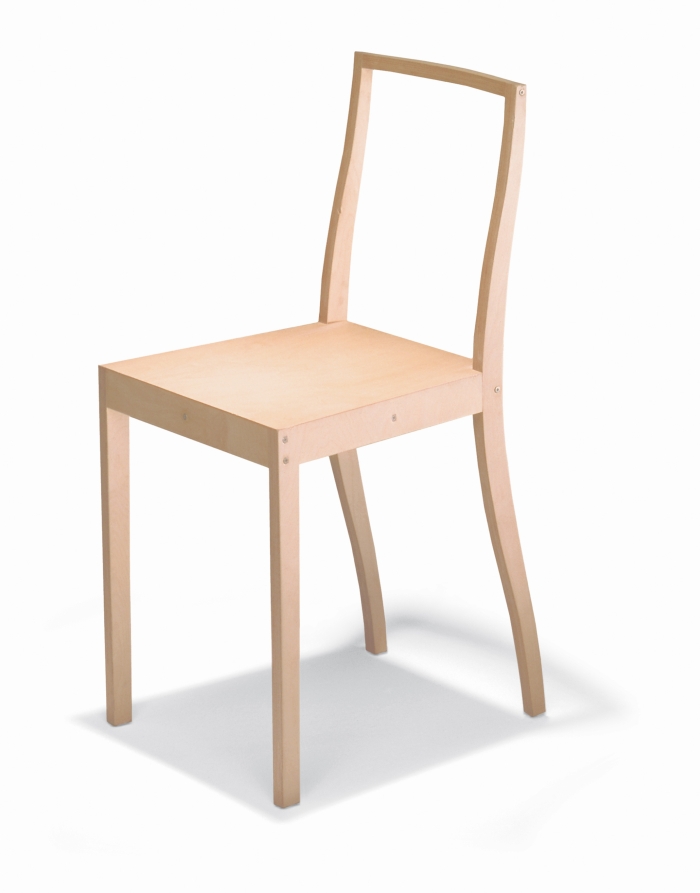 “The coop principle – Hannes Meyer and the Concept of Collective Design” at Bauhaus Dessau, Dessau Germany

It is probably fair to say that of the three Bauhaus directors Hannes Meyer is the least celebrated, and certainly the least well known. Bauhaus Dessau hope to advance both the renown and also the image of the institute’s second Director with an in-depth exploration of one central aspect of his philosophy, an aspect that is in many ways more relevant to contemporary society than all the bent steel furniture and square houses one associates with his colleagues Gropius and Mies van der Rohe: the collective.

Collective as in just as Hannes Meyer rarely developed a project on his own but preferred to work in co-operation with others so today are ideas of collective power, collective responsibility and collective thinking forming the basis of ever more design and architecture processes.

Collective as in communal, we’re all in this together. Under Hannes Meyer the phrase “Volksbedarf statt Luxusbedarf” – the needs of the people not the need for luxury – became a rallying cry of Bauhaus; today designers and architects are increasingly understanding their responsibility as being to help society rather than create commercial goods.

Looking at collective ideas across themes such as education, society, landscape and of course architecture in addition to exploring the person Hannes Meyer in more detail, Bauhaus Dessau hope to explain Meyer in a modern context and so underscore the enduring relevance of his thinking, methodologies and by extrapolation, his tenure as Bauhaus Director.

The coop principle – Hannes Meyer and the Concept of Collective Design opens at Stiftung Bauhaus Dessau, Gropiusallee 38, 06846 Dessau-Roßlau on Thursday May 21st and runs until Sunday October 4th

With everybody in the world getting very, very excited about the new fruit watch and the possibility that thousands of other companies will release very, very similar products at a third of the price or less, it seems very appropriate that the mudac in Lausanne is staging an exhibition which aims to underscore not only the central cultural role watches, watch making and time-telling have and continue to play but much more how despite the unchanging nature of a watch’s function, how time-telling as a process continually manages to reinvent itself and so maintain its fascination and relevance. To this end Telling Time promises to present examples of historic analogue watch design by some of Switzerland’s most prestigious brands and more modern, digital, watches juxtaposed with and to works by contemporary artists and designers such as, for example, 365 Knitting Clock by Siren Elise Wilhelmsen, Grandfather Clock by Maarten Baas or Ivan Argote’s Time is Money.

In 2010 three brave souls established De Invasie as a platform for promoting and disseminating emerging Belgian design: be that furniture, fashion, graphic or photography. In addition to providing a network for Belgian designers De Invasie also organise regular collective exhibitions at design weeks: and now in conjunction with the Design Museum Gent are organising their first museal exhibition. Given that the exhibition, as with all De Invasie showcases, is being organised on the basis that creatives can apply rather than being chosen, we’re not expecting a particularly deep curatorial position to run through the exhibition; however, we do expect an exhibition that presents some examples of the very exciting and innovative creative talent currently to be found in the Belgian Kingdom, and thus an exhibition which further underscores the strength of contemporary Belgian design. A bit like the the way the MoMA New York helped promote American design in the 1950s with programmes such the “Good Design” exhibitions. 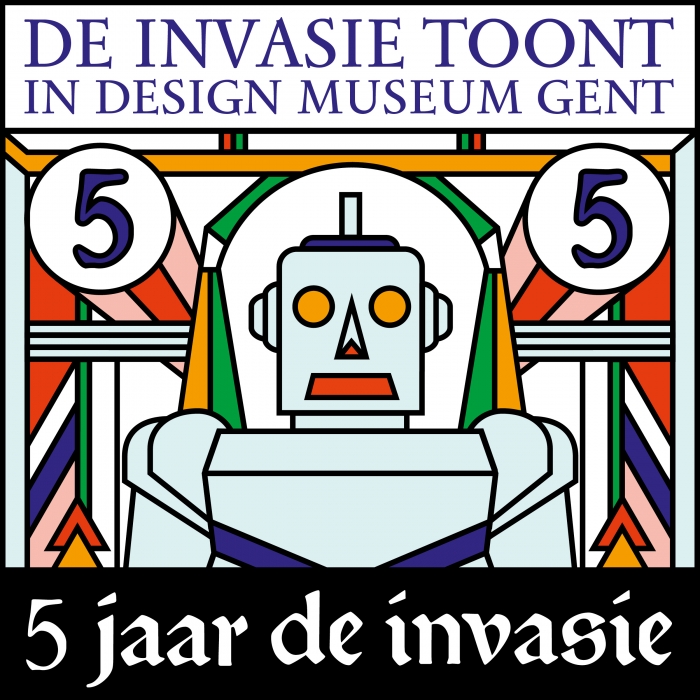 “Workplace for the New World” at Bureau Europa, Maastricht, Holland

“What makes work worth the effort?” asks the introduction to Bureau Europa’s latest exhibition, “How do our daily actions give meaning to our lives and to our physical environment?”

Questions that would tend to indicate an exhibition conceived in a cold railway station on a dank, wintry Monday morning.

In addition to a central exhibition exploring the nature of work, the term work and the future role of work “Workplace for the New World” also promises a series of workshops and lectures in which new positions will be presented, analysed and tested, thus making the exhibition more proactive than reflective. A work in progress, if you will.

Workplace for the New World opens at Bureau Europa, Timmerfabriek, Boschstraat 9, 6211 AS Maastricht on Friday May 1st and runs until Sunday July 5th. 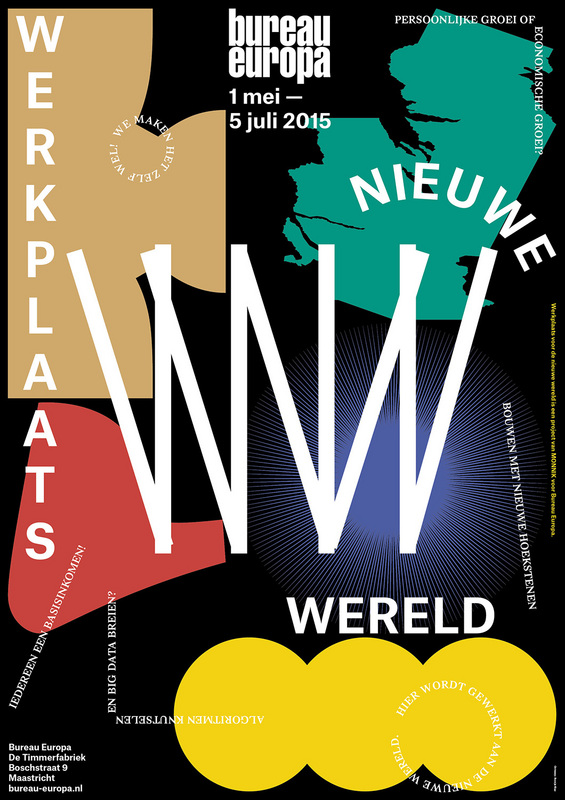 Workplace for the New World at Bureau Europa, Maastricht