As we noted in our post on the exhibition Open World at Kazerne Eindhoven, for a city that is often cited as the hub of contemporary European creativity, there isn’t much on show publicly in downtown Eindhoven.

Rather than being the bustling hive of vision and inspiration one may expect, the centre of Eindhoven is in many ways a textbook example of the sort of monochrome, backwater provincial town that could vanish overnight without anybody noticing. Save of course photographers who specialise in images of urban banality and quiescence.

Established by husband and wife team Annemoon Geurts and Koen Rijnbeek Kazerne Eindhoven is a mix of design gallery, design lab, restaurant and hospitality location: and an attempt to shake up the current state of affairs and bring the local creativity from its peripheral ghettos into the heart of Eindhoven.

At the opening of Open World we spoke with Annemoon Geurts about Kazerne, Eindhoven design and Eindhoven in general, but started, somewhat logically, by asking how Kazerne came about,

Annemoon Geurts: Following my graduation from Design Academy Eindhoven I established my own corporate design agency. At that time my husband Koen was still working as a musician, but he subsequently decided that he wanted a change and so joined me in the agency. In context of Dutch Design Week 2006 we organised our first “Eat Drink Design” event, a sort of pop-up restaurant where guests dined amongst, on and with various design works. The motivation with the first Eat Drink Design was largely as an excuse to do something other than sitting in the office staring at our computer screens all day, however because it was such fun and was so well received we decided to repeat it in 2007, just a bit bigger. And so in 2007 we initiated a project in which we paired Eindhoven designers with local restaurants to work on a joint project and to see how, if, the designers could help support the restaurants. That first year we had seven projects, projects which generated a lot of very positive reaction and feedback, and caused us to consider if we could take it further, do something for the local creative industries, and so we decided to establish a platform, a permanent location where people can meet, eat, drink, sleep and design.

Annemoon Geurts: We’re not professional property developers. Or we weren’t, we are now! No, it was just seven years busy with planning, feasibility studies, raising finances, dealing with the city authorities….. And because we were working in the agency, organising Eat Drink Design and developing the project all in parallel it all took a little time.

smow blog: Property development is a nice link, it’s fair to say an important component of the project is the vast space you have here. Was this building a location you were aware of, was it the building that from the very beginning you had you to have?

Annemoon Geurts: No, not at all, in fact we were unaware the building was here, and that although we actually live fairly close! This building used to be a garage for the city’s garbage trucks but was boarded up and derelict for many years, so we never really paid it any attention, and so the first time we saw it we couldn’t believe that such a wonderful space existed here in the middle of Eindhoven! But we knew straight away it was the perfect location. It’s such a wonderful large space with two distinct personalities, the industrial, spacious and open character of the main building and then with the neighbouring buildings you have something much smaller and more personal, so two different atmospheres in one location.

smow blog: The most public elements of Kazerne are the restaurant and exhibition space, but you have also the so-called Kazerne Lab, briefly what is the Kazerne Lab…….?

Annemoon Geurts: One of our principle objectives with Kazerne is to explain the added value of creative industries. A lot of people know that creative industries are important, but most don’t really understand what that means, and so we want to provide practical demonstrations of the added value of creativity. In that respect one of the roles of Kazerne is connecting designers with local industry and with the Kazerne Lab the aim is to let designers and trades cooperate and see how they can motivate and inspire one another. The restaurant tables, for example, are the result of a Kazerne Lab project in which we asked Studio Daphna Laurens and a local metalsmith to cooperate on the development of a table specifically suitable for use in restaurants. In addition to such commercial projects a major focus of the Kazerne Lab will be social design, so projects which investigate how and where designers can help improve social conditions.

smow blog: And we suspect this aim of explaining the creative industries is then carried on through to the exhibitions, or…..?

Annemoon Geurts: Yes, the first exhibition was Open Mind, in which we explained that creatives tend to think differently, that they rarely think from A to B, but rather approach things in less logical ways, which is why they can then come up with new ideas and fresh approaches. The current exhibition Open World is about showing research designers are currently undertaking and to explain what the designers are doing, why and where it could lead. In addition we also want to use the exhibition to initiate a discussion with the technical industries here in Eindhoven. I think Eindhoven is a beautiful example of how the two brain halves work – you have a creative part and you have a nerd part and when the two halves come together you have the potential to create great things.

smow blog: That as may be, but in Eindhoven there isn’t much evidence of the city’s creative potential on public display, can you explain that?

Annemoon Geurts: I am also amazed that in the middle of the city you have no sense of design, that there is no indication of the potential that is here, which also one of the reasons we were convinced Kazerne would work because Eindhoven needs a platform where design can be presented all year round, not just during Dutch Design Week, and also presented outwith normal museum opening hours, in a more relaxed, less daunting, atmosphere. It’s very satisfying when you see people come in for a cup of coffee, not expecting the exhibition and then enjoying it. Or when one sees restaurant guests wandering through the building between courses, exploring the exhibition, and hopefully learning something new.

smow blog: You’ve been up and running here since October 2014, it may be a little early to ask, but have you plans for future expansion or development?

Annemoon Geurts: When we started we decided the first goal was to make the large space operational, to generate a steady income and then once that was established to begin with the smaller buildings. At the moment in addition to the exhibition space we have the bar, one restaurant and one function room but when everything is completed we will have three function rooms, two restaurants and seven apartments. All going to plan this Phase Two will be finished by the end of 2016 and we will then, hopefully, have enough resources to enable us to realise projects outwith Kazerne, both elsewhere in Eindhoven but also further a field. We’ve got a lot of ideas and a lot of opportunities, but currently not a lot of money! However having taken seven years to open Kazerne we know that good ideas can take time to reach fruition!

More information on Kazerne Eindhoven can be found at www.kazerne.com 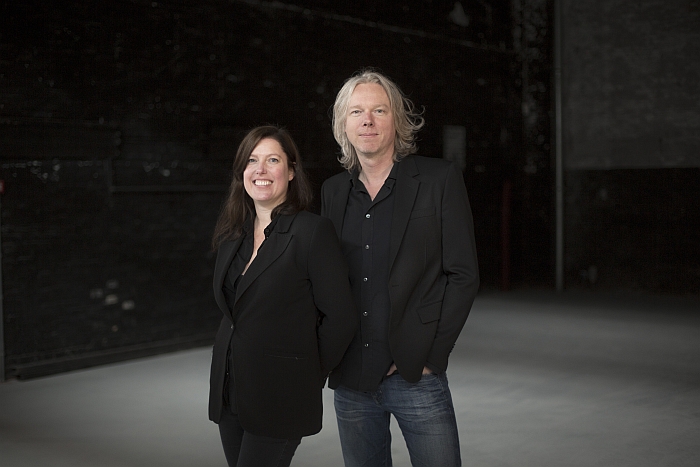 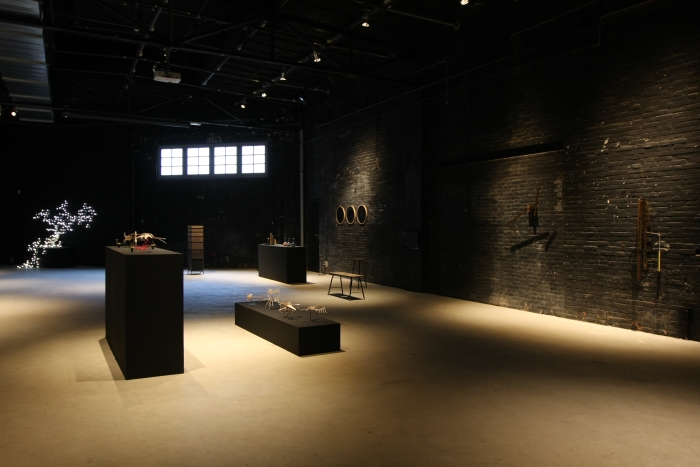 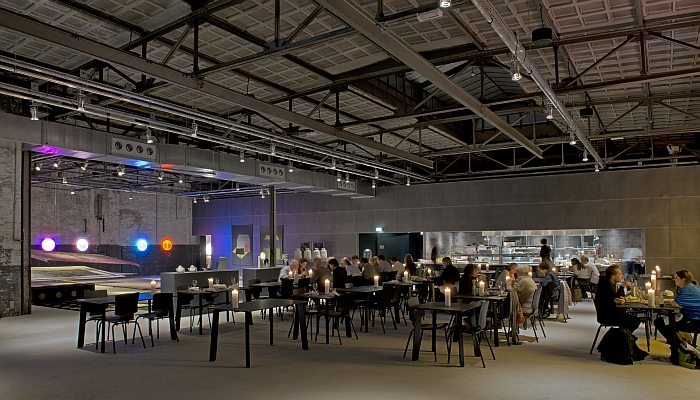 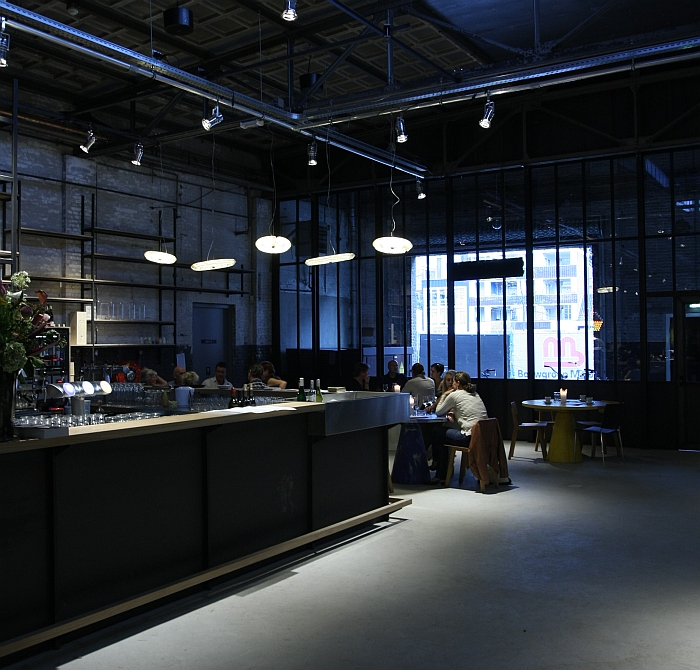 The cafe/bar at Kazerne Eindhoven