“This is a job of work whose goal is precision, delicacy, amiability and attentiveness: being attentive to people, uses, buildings, trees, asphalt or grass surfaces, to what already exists. It’s a matter of causing the least inconvenience or no inconvenience at all. It’s a matter of being generous, giving more, facilitating usage and simplifying life”1

These words stand not only in the centre of the exhibition “Studio Plus. Druot, Lacaton & Vassal: Transformation as an architectural manifesto” at the Architekturgalerie am Weissenhof Stuttgart, but at the heart of the philosophy of the French architects Frédéric Druot, Anne Lacaton & Jean-Philippe Vassal. 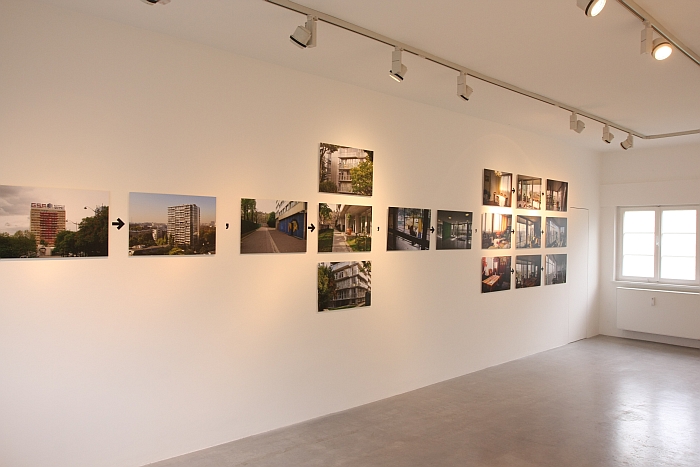 Originally written as a report for the French government in 2004 and published in 2007 as the book “Plus: Large-scale housing developments, an exceptional case”, Frédéric Druot, Anne Lacaton & Jean-Philippe Vassal’s “manifesto” proposes a new approach to dealing with downtrodden, blighted and unloved 1960s and 70s high-rise urban tower blocks, of turning them, literally, into shining pillars of their community. Or as at the architect’s put it, of “recreating the impact of postwar reconstruction, which had initiated the move from insalubrious to salubrious housing, and of instigating the pleasure of living in it. This means embarking on a positive revolution whose aims are totally opposed to operations of demolition and reconstruction”2

In place of “demolition and reconstruction” Druot, Lacaton & Vassal propose a series of interventions which they argue are not only cheaper and less environmentally invasive but also cause less distress to residents, allowing as they do maintenance of the social fabric of the estates. In essence their proposals place a central importance on steps such as installing larger, whole wall, windows, addition of balconies, and of conservatories, better thought through (and coloured) public spaces within the buildings, a return of the Concierge and better organisation of external facilities. But for all of creating larger living rooms which transform the living room from a room like any other into “un large espace de vie”, an ample space of life.

The inclusion of social facilities in the renovated buildings, for example, laundrettes, nurseries, swimming pools and offices is all very à la Le Corbusier and his Unité d’habitation projects, and in many other respects the Plus projects can be considered as a return to many of the original ideals of modernist architecture, an attempt to provide safe, hygienic, affordable, socially responsive and responsible accommodation which supports and advances its occupants, or as the official catalogue for the 1927 Weissenhofsidelung exhibition put it ” the struggle for contemporary housing is just one part of the greater struggle for new forms for living”3 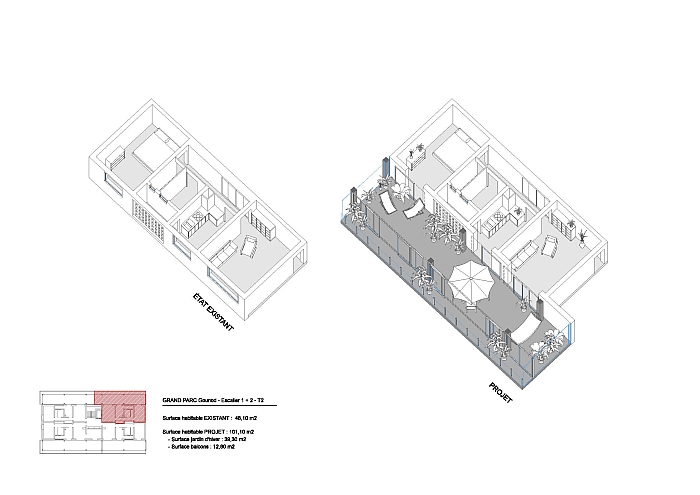 The Plus report featured four theoretical studies, in Aulnay-Sous-Bois, Le Harve, Nantes & Trignac and two submitted competition entries by Druot, Lacaton & Vassal which have subsequently been, at least partially, realised Petit Maroc in St-Nazaire and the Bois-le-Prêtre tower block in Paris.

The Stuttgart exhibition focusses on Tour Bois-le-Prêtre, and that largely through photographs of the transformation of the tower block. In an accompanying video the three architects discuss their plans, the theorising interspersed with clips of Tour Bois-le-Prêtre residents expressing their gratitude for the changes.

Over-egged as the video production unquestionably is, it does contain a few nice insights into what was undertaken, why and how it has been received. And thus provides the factual base for the exhibition.

A few freely accessible copies of “Plus” would help underpin such. As would a few posters explaining how the costs of renovating Tour Bois-le-Prêtre compared with the demolish/rebuild principle. Or the subsequent energy savings. Such aspects don’t come over strongly enough in the exhibition, yet are important if one is to understand why the Plus approach is even worth considering. The focus of the exhibition is much more on the physical transformation, the visitor being left to fill in the blanks themselves at a later date. That said we do understand that “Plus” is a prohibitively expensive book. And we also understand that the Architekturgalerie am Weissenhof is very short on space. Peter Behrens, for all his foresight and genius not predicting his contribution to the Weissenhofsiedlung exhibition becoming a gallery.

Faced with such “problems”, politicians of all hues and all nationalities prefer to build anew; to clear the failed philosophy they have inherited from previous regimes and make their own mark, a firm statement of their deep concern for the nation and the well being of those individuals, invariably working families and pensioners, with whose fates’ they have been temporarily entrusted. Pure symbolism of course, and all too often at the expense of ecological, social and financial sense.

Druot, Lacaton & Vassal aren’t saying that objects such as Tour Bois-le-Prêtre are outstanding architectural wonders which should be preserved for what they are; rather they say they are there, they serve their function, they just need to be improved. And improving them costs less and has less impact on the environment and the communities than demolishing and rebuilding.

Something which of course also applied, and applies, to the ideas and concepts developed in 1927 for the Weissenhofsiedlung exhibition.

All in Stuttgart can view Studio Plus at the Architekturgalerie am Weissenhof, Am Weissenhof 30, 70191 Stuttgart until Sunday April 3rd. 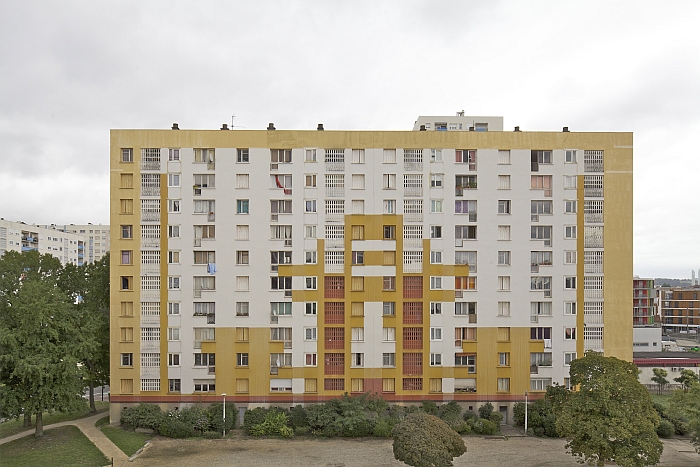