Although Thomas Schnur and Klemens Grund both initially completed a carpentry apprenticeship, and both studied in Aachen, they represent two very different typologies of design career.

Whereas Thomas studied Product Design at the FH Aachen and subsequently established his own studio from where he works across a wide range of materials and processes, Klemens studied design at the craft based Gut Rosenberg in Aachen before going on to complete his carpentry Meister and working first in a carpentry workshop and later in the office of the architect Peter Zumthor, before establishing his own studio. Yet despite the differences in their approaches a comparison of the work of both reveals certain similar traits, not least in context of the use of a material’s natural properties rather than relying on external aids and also in the visual reduction of their works.

A not inappropriate location for projects normally to be found doing little more than helping fill otherwise empty cupboard space. 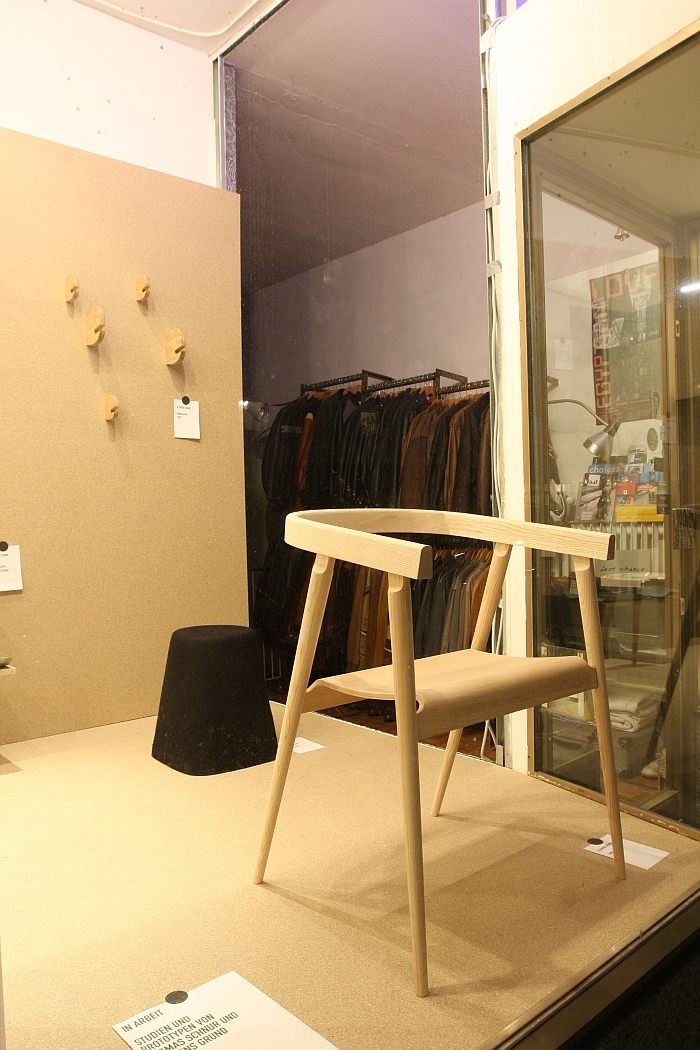 On the one hand in Arbeit is about explaining the design work process, something that is most eloquently achieved through a project by Thomas Schnur presented as four stages on the way from an idea to a chair: it’s not yet there, but in the four stages one can already see how an initial idea can fundamentally change while remaining essentially the same. How the route taken from idea to final object is the key to object

As a consumer one is normally presented with a finished product, obviously in itself no bad thing, but the separation from the development process is also one reason why a fair like IMM is awash with similar forms: the market focuses on a final visual image, invariably copied from an object considered successful. The designer – or at least the conscientious designer – focuses on the way there: what they want to achieve, why they want to achieve it, how they want to combine the technical and aesthetic characters, etc, etc, etc And that is, one of the, differences between the honest object and the senseless twaddle.

Or put another way, all interesting objects have backstories…

….in which context, one of the objects presented in in Arbeit is a moulded plywood brush and dustpan created by Klemens Grund. During a period working in Switzerland Klemens needed a new brush and dustpan set, in the shops all he could find were unappealing plastic sets. The designer’s instinct awoken he created his own, for no other reason that he needed one and felt he could do better than that which was on the market. Which he arguably has with a delightfully reduced yet expressive and engaging piece, and one which we see no reason to doubt functions just as satisfyingly. As an object it is in principle little more than initial brainstorming, yet delightfully demonstrates how through brainstorming questions arise and through questions the search for answers. 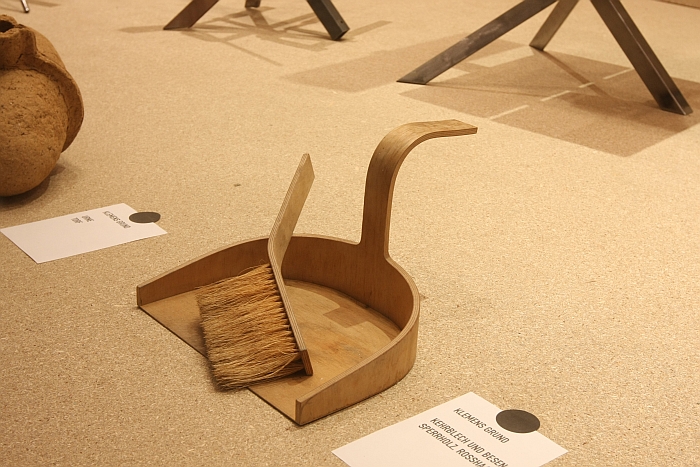 Good design rarely occurs in silence or isolation, but rather, and as Markus Jehs so succinctly put it, “Discourse is the most important aspect of design“, with in Arbeit that discourse occurs on several levels.

One the one hand that between Thomas and Klemens during the preparation of the project, and the new perspectives thereby allowed not only into their own work generally but specifically into the objects now on display. Which could be considered awfully insular in context of a public presentation, were it not also a reminder for all creatives that it is important to always find new perspectives on your work, and your processes.

Secondly there is a more distant, indirect, discourse with the viewers who are invited into the design process and asked to reflect themselves on what they see,to question what is being undertaken and the sense therein.

Whereby if we did have one complaint it would be that only the one stool is presented as a progression, sure the space didn’t allow more such explorations, but there are occasions when one suspects they could be helpful, insightive; that said, with the majority of the works one can clearly see what is intended, how much work is needed and therefore what such a creative process involves.

Yes, we hear you at the back “Why should I do that, why can’t I just buy a finished product? From a shop!”

Sorry, our fault, we thought you were interested in design.

If you’re not, go buy any old product just because the PR pictures are high gloss and it looks like something you once saw in a cafe somewhere. And thought looked a bit “Danish.” Or HoBo.

For all in Cologne during IMM/Passagen Interior Design Week in Arbeit can be viewed 24/7 in the windows of Vintage Emde, Bismarckstrasse 56, 50672, Cologne.

Full details on Thomas Schnur and his work can be found at www.thomasschnur.com and on Klemens Grund and his work at www.klemensgrund.de 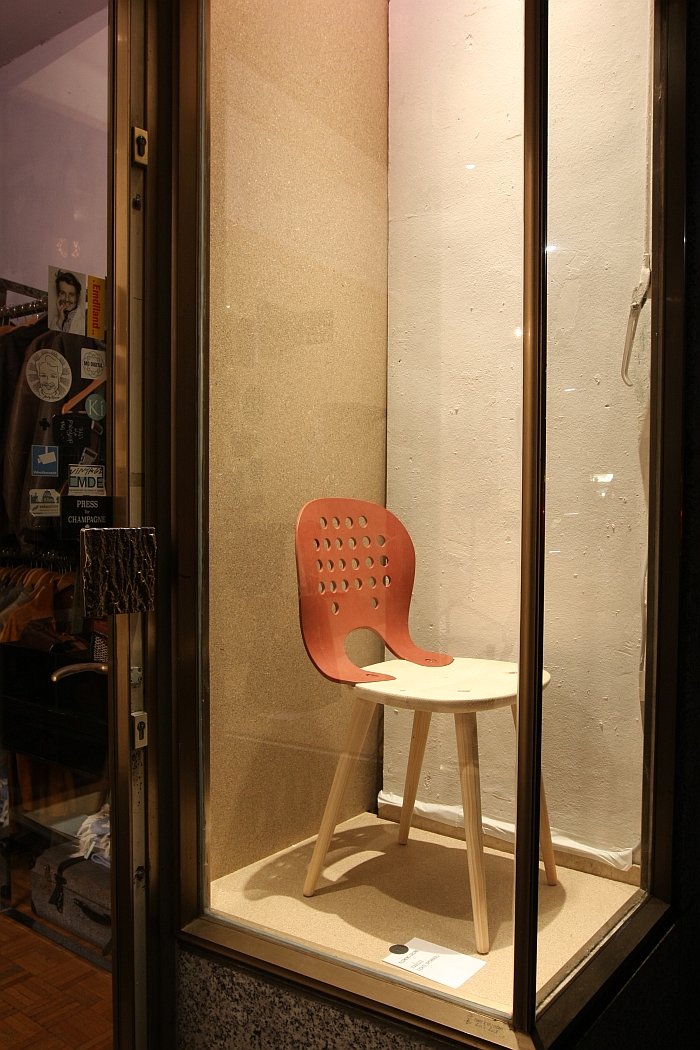 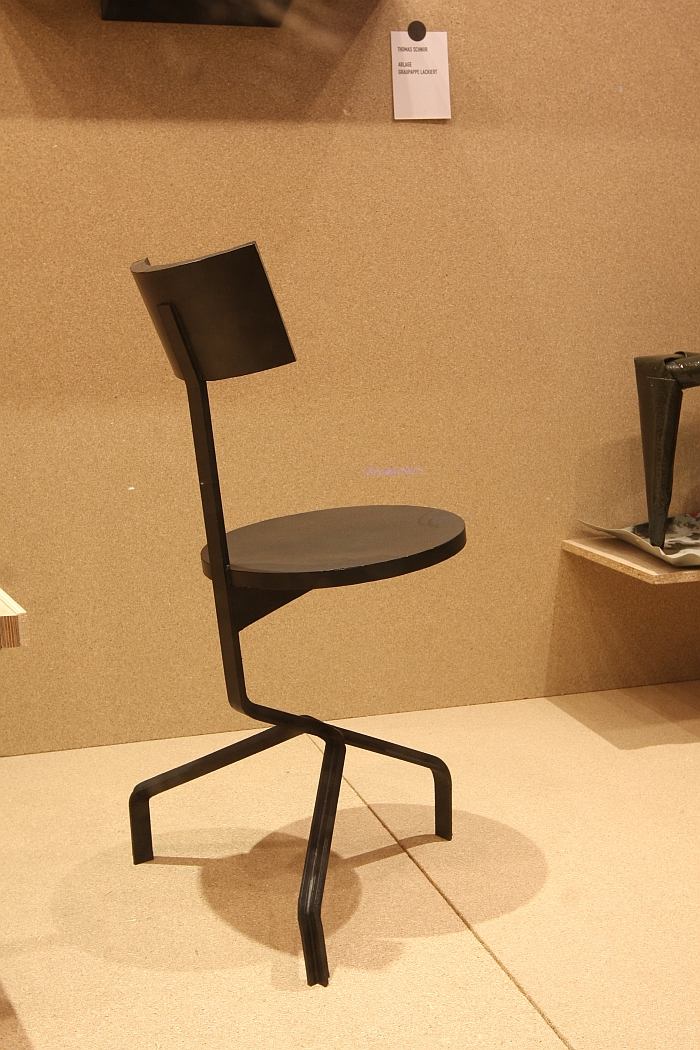