The 2018 ArtEZ Academy of Art & Design Arnhem graduation exhibition was staged under the title, Liberty, but how many would the students be taking……

Formally established in 2002 through the fusion of existing creative colleges in Arnhem, Enschede and Zwolle, ArtEZ not only still maintains colleges in the three locations, but unites the three, and the word Art, in the name ArtEZ; not particularly elegantly, but effectively.

The contemporary ArtEZ Arnhem arose through the fusion of, amongst other institutions, the former Arnhem colleges of Architecture, Theatre, Dance and Art, the latter tracing its history back to 1929, formally known today as the ArtEZ Academy of Art & Design Arnhem, counting amongst its alumni the likes of Iris van Herpen, Ineke Hans and Marcel Wanders, and since 1963 housed in a thoroughly absorbing glass curtain wall building by Gerrit T Rietveld, a sibling work to his academy in Amsterdam and a building which, and as with so many of Rietveld’s works, stands in direct contrast and juxtapose to its neighbours: and that, and as with so many of Rietveld’s works, particularly elegantly, and effectively.

We however weren’t in Arnhem to consider Rietveld’s work, rather that produced within it……. 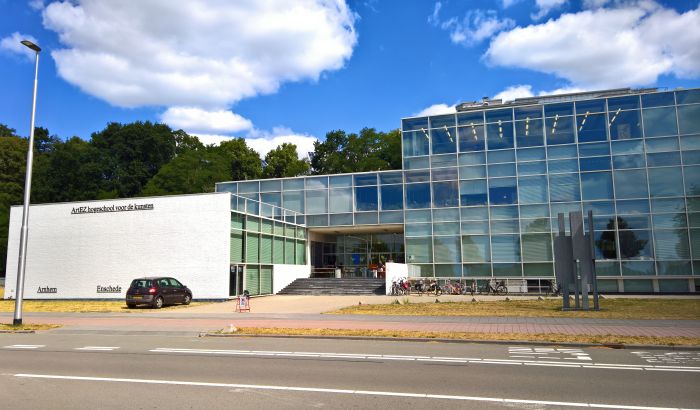 Home to some 800 students the ArtEZ Academy of Art & Design Arnhem is, according to the institute’s website, the largest academy within the ArtEZ web, and in terms of Design offers undergraduate and postgraduate courses in Interaction, Fashion, Product and Graphic; students of the latter presenting in context of Liberty 2018 not only their graduation projects and theses but also a report on their internships, something we found particularly satisfying as it not only provides insights into what the students learnt/did on such, but also, knowing that such will be written, hopefully, ensures that that studios providing internships provide something not only worthy of writing about, but which provides for an entertaining and absorbing read.

Among our highlights at Liberty 2018 was one which wasn’t a student project, but rather the title of the Interaction Design presentation, the otherwise underwhelming “-NTERACT-ON DES-GN—-UNF-NALS–2018”. While the “Unfinals” did and does confuse us, the missing letters make perfectly clear the lack of a distinguishable “I” in contemporary digital culture and human/machine interfaces, that it’s all about the undifferentiated mass, a state of affairs several of the Arnhem Interaction Design projects took a critical view of, or perhaps better put attempted to highlight with the very clear recommendation to viewers that they should take a critical view of such.

Arguably less critical if every bit as reflective, considered an vociferous was the 2018 Product Design graduation presentation, a presentation which presented a very pleasing mix of understandings of the apparently unequivocal “Product” in Product Design. 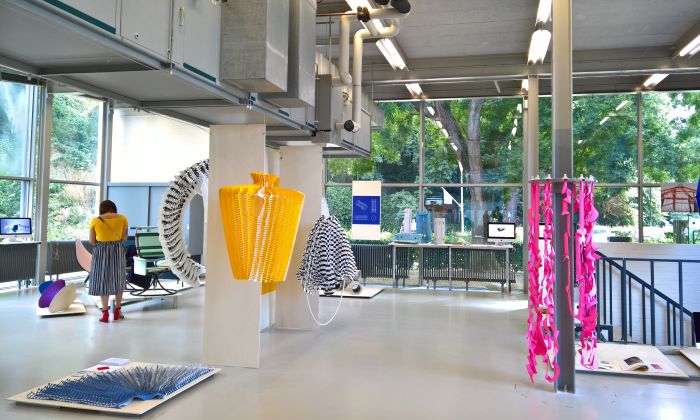 Among those Product Design projects which particularly caught our attention were De Nederlandse A by Sophie van de Laar which explored Dutch identity, or perhaps better put Sophie’s contention that because we are all different, are all the sums of our component parts, there can be no unifying national identity, Dutch or Otherwise, and a position she very succinctly explored though an investigation of the variance with which individuals pronounce De Nederlandse A: The Dutch A; while in her project Color Masquerade Ronja van den Berg ignored the noble art of form-giving in context of chair design and instead placed a formless textile on an otherwise anonymous frame which then became the chair, a formless textile defined by its colour, therefore making colour the central form-giving component.

Similarly ignoring the chair as such, with The Ever Increasing Afterlife of Chris Alex Munsters not only produced the most confusing project name we experienced all summer, but much more deconstructed a lounge chair into three component parts – Skeleton, Mass, Upholstery – which he subsequently re-interpreted as new objects: The Skeleton as a chair with visible frame/construction; Mass as autonomous forms whose function is equally freely interpretable; Upholstery as accoutre for humans rather than chairs. And which is one of those projects which even after all the weeks since we saw it still occupies us, where we still can’t establish a definite position on it, are still irritated by something undefinable within it. Which is in many regards exactly what you want from a student project.

Similarly Aquatic Biotecture Maxim Robbe Dijkstra. Realised in conjunction with marine biologists and activists, Aquatic Biotecture sees Maxim propose with Coral Mandala and Fish Hotel two projects intended to promote marine life: the first aiming to counteract coral bleaching, the second seeking to re-invigorate old fish migration routes, those migration routes disrupted/altered/blocked by human activity. As ever with such interventions in the natural world our initial position is one of caution, as a species we really aren’t as clever as we like to think we are and really can’t anticipate the consequences of our actions; however Maxim’s proposals, or at least Fish Hotel, have for us that element of the uninvasive yet supportive, the active passive, that makes them sound like something worth pursuing. While that is we learn to stop killing coral and disrupting/altering/blocking fish migration routes in our own selfish interests.

Full details on the ArtEZ Academy of Art & Design Arnhem can be found at www.artez.nl 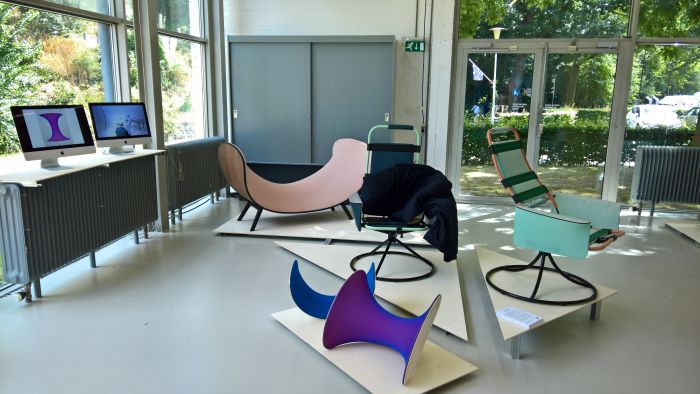 The Ever Increasing Afterlife of Chris by Alex Munsters, as seen at ArtEZ Academy of Art & Design Arnhem Liberty 2018 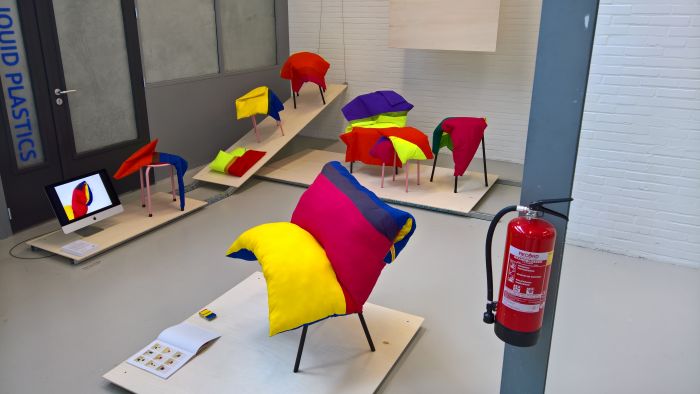 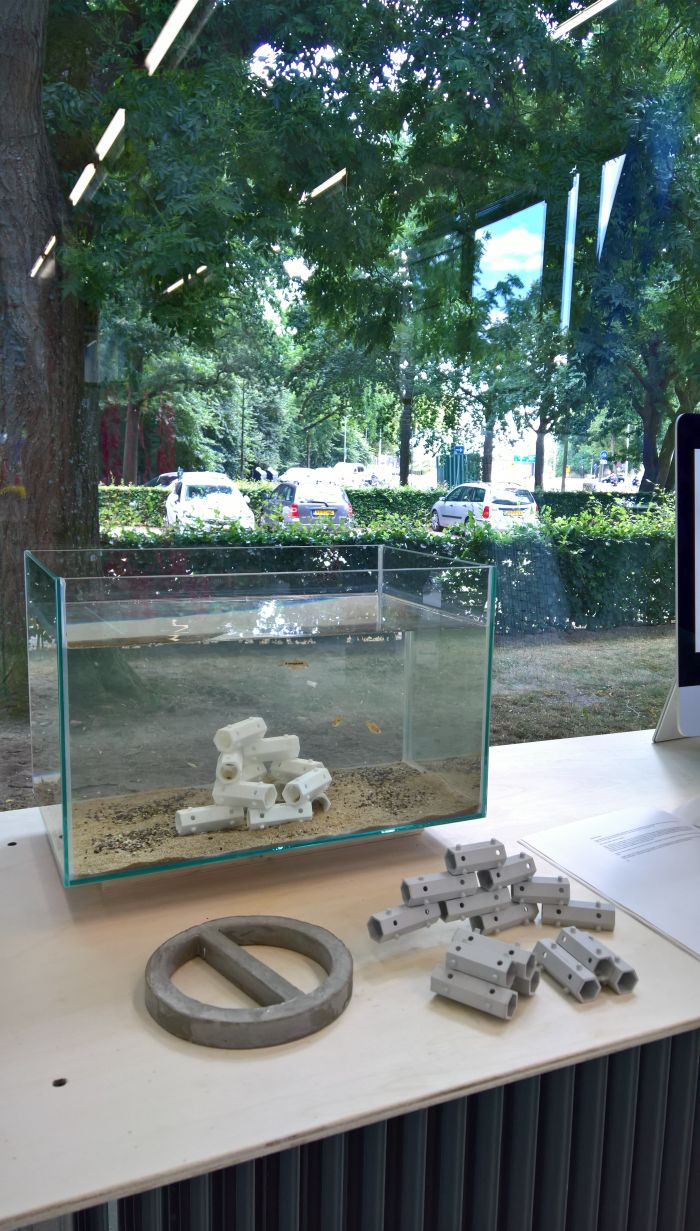