“As far as I’m aware….. that applies …. with immediate effect, forthwith”

Rarely has an almost sentence in a press conference had such consequences. With his confidently unconfident utterances on the evening of Thursday November 9th 1989, a statement concerning a relaxation on restrictions for those East Germans wanting to travel to West Germany, a statement made while distractedly flicking through papers looking for, and missing, the answer to the question of when the relaxations applied, Günter Schabowski, East Germany’s ruling SED’s somewhat bombastically titled, Secretary of Information, in effect, opened the Berlin Wall. Within the hour streams of those East Germans were taking advantage of the freshly, prematurely, relaxed restrictions and flowing westwards…….

Yet for all its momentousness, as the exhibition 1989 – ​Culture and Politics at the National Museum Stockholm reinforces, the fall of the Wall, was only another event in a remarkable, momentousness, political year.

And a remarkable year for creative expressions: 1989 seeing the death throes of Postmodern design, art getting political, again, while in music the increasing influence of electronic dance music, for all House, in all in its numerous guises, was not only being felt in the music produced, but in the attitudes of the yoof: the poodle rockers and 80s pop kids were still there, still enjoying success, but a new generation was preparing to replace them. And a new generation who were, when not necessarily more aware than the poodle rockers and pop kids of contemporary political, economic, environmental and social realities, certainly were much more prepared to vocalise their opinions, and developing new soundscapes in which to do that.

And so by way of marking not only 30 years of Günter Schabowski stumbling towards the reunification of Europe, but all those other moments, good and less so, in 1989….. a Radio smow playlist of 89 songs from ’89…… 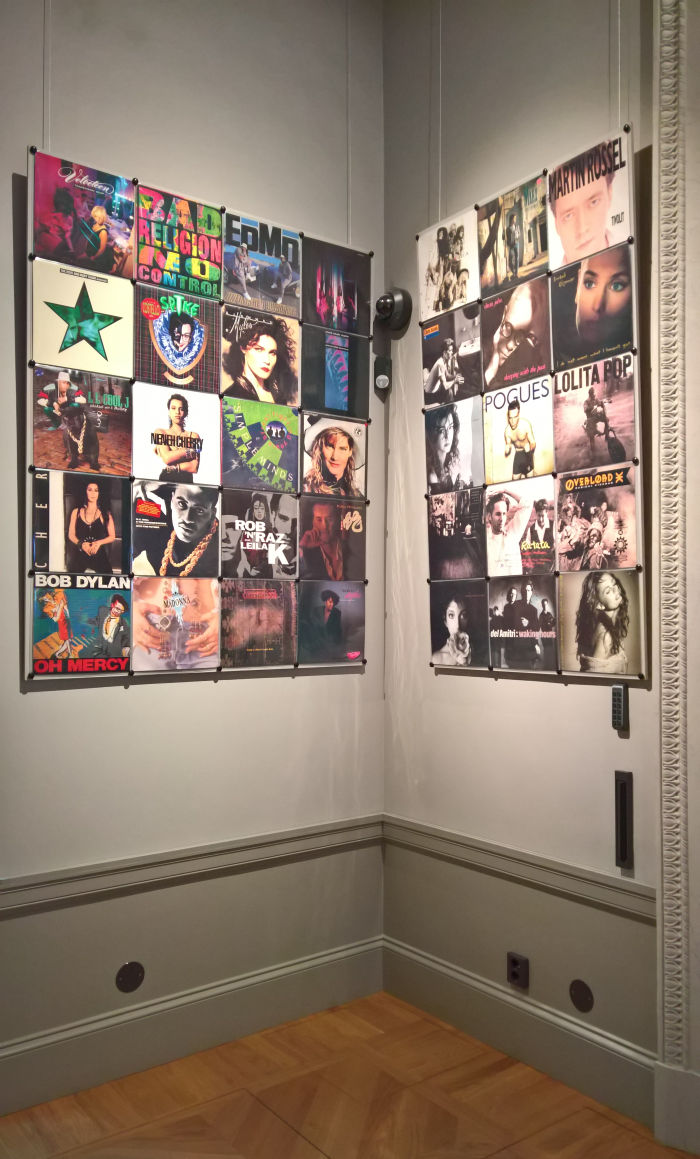 Record sleves from 1989, as seen at 1989 – Culture and Politics, The National Museum Stockholm

The planning for this playlist has been long, certainly much longer than Günter Schabowski invested in reading his own briefing notes, and brainstorming ahead of our trip to Stockholm to view 1989 – ​Culture and Politics we built a list of over 50 songs, a long list which after we’d added those featured in the exhibition, and which were available on Spotify, and not completely rubbish, had grown to over 120. And which grew even further when we decided that for reasons of completeness we had to include all the No 1 singles in Sweden in 1989.

Cutting that long list down to 89 was a brutal, almost inhuman, process, and a process in the course of which an awful lot of artists who would normally feature in any Radio smow playlist, and who were producing really, really, good work in 1989, were rejected.

Which didn’t necessarily improve the quality of the playlist. There are a couple of absolute stinkers in there. A few absolute gems. But also a couple of absolute stinkers. But don’t blame us. Blame Sweden 1989. For the aim was to create a playlist, which, and much like the exhibition 1989 – Culture and Politics, not only reflected wider global developments but also had a Swedish accent, focus, and which should provide not only a few “remember that!!” moments for Swedes, but also introduce non-Swedes to one or the other new-ish cultural experience.

It’s around six and a half hours of music, our tip is to listen on shuffle, it allows for some joyous random juxtapositions…. our favourite so far was going from Kylie & Jason into Einstürzende Neubauten….

And for all fact fans, the last 10 are the 1989 Swedish number one singles, in chronological order.

We did briefly discuss Looking for Freedom in our post from 1989 – Culture and Politics, but feel it is worth repeating ourselves here, it is after all the Mauerfall song…

The Hoff assures us. But will he? He’s already been “looking for so long”, arguably neigh on 20 years. And still he’s never found it, “still it can’t be found”

And that despite the fact he already has it. He has his freedom. His physical freedom, political freedom, freedom of thought, freedom of expression. Everything he’s done and is doing testifies to that.

The only thing restricting him, pinning him down, obscuring his view of that freedom, is himself, arguably a self-restriction caused by events and/or memories past, an emotional block holding him back, and thus he can work on as many farms as he wants, develop as many muscles in his arms as he wants, go from door to door to door to door to door as long as he wants, vote for whichever party he wants, but, and as we noted from Stockholm, until he learns “to move on, to align his world view with world realities rather than a reflection of the world past, freedom will always remain an elusive dream.” Freedom begins within.

Which yes, does allow for the development of the most delicious metaphor…….

In our post from 1989 – Culture and Politics we noted that despite the continual, deafening peal of the alarm bells, environmental issues weren’t as prominent as they could/should/must have been amongst 1989 society, amongst 1989’s cultural protagonists. Which doesn’t mean they were ignored, and several songs amongst our 89 approach the subject from a variety of angles, perhaps most graphically by New Model Army, and their warnings of the state of the environment, and the unignorable damage society was inflicting on it, and where we were heading…..

expounds the gnarled narrator towards the self-blinded masses,

“And as the waters rise, it seems we cling to all the rootless things
The Christian lies, technology, while spirits scream and sing, Oh God I love the world”

And while yes there is a slight inconsistency in the spirits invoking rootless things, thirty years on we’re all shocked at the state of the planet, are shocked by the rising, plastic filled, waters…… but are certain technology can help us. Rather than understanding the problem is us, we need to change, not just find new ways of continuing as we are. We need to overcome our egos. And need to overcome them quickly if we’re to avoid a future where our narrator finds themself,

If 1989 was a year where a lot of oppressed peoples found their freedom, apart from The Hoff, it was also a year of increased awareness of the injustice, brutality and continuing legacy of the white colonialists. Or put another way, while everyone knew that the native Australians had had their land stolen from them by white European settlers, we were all happy enough to ignore the fact. Native North Americas were happy enough in their reserves, and native Australians happy enough in the Western Desert.

And then in 1989 Midnight Oil decided that really, really, couldn’t continue:

Thirty years later Australian civil society is (slowly) acknowledging that a theft was undertaken, the most obvious indication of evolving opinions being that tourists are no longer allowed to climb Uluru/Ayers Rock, but if that all makes up for the years of oppression, subjugation and discrimination endured by a people who did no more than be somewhere white Europeans wanted to settle…..?

The late 1980s saw, arguably, a radicalisation in the black power movement in America, not that it ever went away, and indeed it is, inexplicably, unforgivably, still very much alive; but the late 1980s were, inarguably one of the more radical political periods in recent decades. A radicalisation that, logically, also expressed itself through music.

And with Fight the Power, from the (depressingly) ever contemporary titled album Fear of a Black Planet, Public Enemy very eloquently present their take on late 1980s American social and political realities. It’s a work in which every sentence, every utterance can, must be dissected and deliberated, but for us the most important moment has always been

“Most of my heroes don’t appear on no stamps”

An almost childish complaint, stamps!?!? But one that perfectly underscores how social and cultural conventions are normalised by unassuming everyday objects. Such as stamps. (Note to anyone under 35: ask your grandparents, they’ll explain “stamps” to you) Stamps celebrate, stamps promote, stamps fetishise, people, events, objects, symbols and thereby bequeath them a position of social/cultural primacy of social/cultural validity. And thereby confirm conventions and normalise understandings of the world. If stamps only feature white folks and white folks’ history, black folks and black folks’ history can’t be important. If they were, they’d appear on stamps.

The Beat(en) Generation – The The

“When you cast your eyes upon the skylines of this
Once proud nation
Can you sense the fear and the hatred
Growing in the hearts of it’s population?”

“And our youth, oh youth, are being seduced
By the greedy hands of politics and half truths”

The Radio smow 89 for ’89 playlist, and all smow playlists can be found at the smowonline spotify page.