Design awards. They’re funny things. Sometimes one has the feeling that behind every tree and round every corner a design award is lurking. And while you can have too much of a good thing, awards ceremonies are in principle positive in that they help present a platform to a lot of designers whose work would otherwise go unnoticed outwith specialist circles

One of the oldest and most prestigious design awards is the Good Design Award presented by The Chicago Athenaeum: Museum of Architecture and Design together with The European Centre for Architecture Art Design and Urban Studies. Established in Chicago in 1950 by architects Eero Saarinen, Charles and Ray Eames, and Edgar Kaufmann, Jr.,  the Good Design Awards should, in their words of the organisers, award designers and producers who “stretch the envelope beyond what is considered basic product and consumer design.” Whatever stretching an envelope may actually involve.

The 2008 Award was open to all products designed between 2006 and 2008, and while the awards list does read like a back-scratching PR campaign on behalf of the good and the great of our modern globalised corporate world, the Good Design Awards 2008 have once again unearthed some real gems. The “SOMBRERO Cable Manager” by Andrea Ruggiero being our favourite and something that now stands high on our “must buy” list. It was also good to see smow designers and producers picking up some awards: Artemide winning three awards for new lamp designs that may become available through smow, while Usame designer Patricia Urquiola was rewarded in the category “Tabletop” for her Dining Concept “Landscape”. 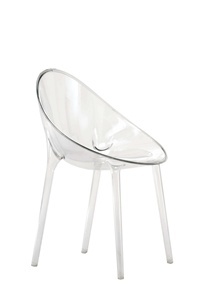 But most heartening was the prize for a design that smow knew was good: Because smow stock it – Mr. Impossible from Phillipe Starck for Kartell. While Phillipe Starck’s polycarbonate chair is admittedly not yet a top seller at smow, it is a favorite with us and is a chair that we are certain will increase in popularity. Mr. Impossible is in many ways a marriage of Starcks earlier work with Kartell, for example his Victoria Ghost chair and Charles Ghost stool, and the plastic side chair tradition of Ray and Charles Eames – and hence its affectionate nickname in the (smow)warehouse: “Eames Ghost”. With its inviting form and extreme comfort Mr. Impossible is just as ideal for balconies and conservatories as it is for reception areas, waiting rooms and bars.

All the GOOD DESIGN 2008 winning designs can be viewed at the Museum’s website –  or for those of you in or near Chicago this summer all products and graphics will be exhibited at The Chicago Athenaeum in the GOOD DESIGN Show for 2009 in Chicago in June 2009.